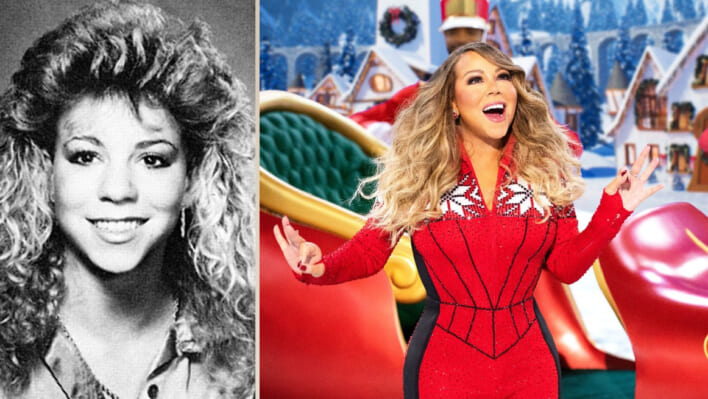 She has been crowned the Queen of Christmas, but Mariah Carey never had the perfect December 25th until later in life.
By Steven John    December 22, 2022

She has been crowned the Queen of Christmas, but Mariah Carey never had the perfect December 25th until later in life.

Mariah Carey is famous for many things but there is one time of year when she stands above the rest: Christmas. Carey’s music is the Christmas season. Her 1994 smash hit “All I Want for Christmas Is You,” is arguably the biggest Christmas song of all time, selling more than 14 million copies worldwide and is, according to RIAA, one of the top-selling singles by a female artist of all time.

The song is so popular and has been played so much that it is blacklisted in some (albeit Grinchy) offices, bars, homes, and shops. There have been spoofs, there have been “official” petitions on Change.org to ban “All I Want for Christmas Is You” from the radio and from play in public spaces.

The thing is, Mariah Carey doesn’t care about the negative noise, (neither do her fans around the world). Carey doesn’t mind the detractors because she genuinely loves Christmas and all the family and warmth it has to offer. Sadlly, as a child, Carey’s Christmastimes were anything but the warm, welcoming season she always dreamed of.

Mariah Carey was born in the early spring of 1969 in Huntington, New York, a town on Long Island about an hour east of New York City. Her father was an engineer of mixed Black and Latino lineage, while her mother was a classically-trained singer of Caucasian descent. Given the mixed racial nature of the family and the lack of tolerance at the time and place of her youth, Carey and her family were largely isolated from their community.

Carey’s parents divorced when she was young and her older sister left to live with her father, her brother, also older, remaining with Mariah and their mother, who struggled to support the family.

Carey was often alone as a child and, when she was around her siblings, she described family life as “extremely dysfunctional” and she recounted numerous incidents of drug abuse and violence among her older sister and brother.

For Carey, there was never a happy Christmas when she was a kid, so she has created a sort of super holiday for herself, her family, and her many fans in her adulthood. Since finding success a young age in the very early 1990s, Carey’s career has been a nonstop success, with “All I Want for Christmas Is You” — coming out in 1994 and being on the charts every season since — a high water mark for her. And again, it’s a heartfelt song and sentiment for Carey.

Having survived an unhappy and often unsafe childhood, Carey is now an adoring mother herself who provides the opposite environment than what she grew up with.

In her W Magazine interview, she said at one point: “I know a lot of the time people are like, ‘Oh, yay! Look at her! She’s, like, so festive and such a Christmas girl,’ or whatever. But, really, Christmas makes me happy.”

RELATED: How The Grinch Stole Christmas’ Most Memorable Grinch Quotes

And how and why can anyone really fault her for that? When you see Mariah Carey not as a caricature that comes out each holiday season in a red dress singing the same song but instead as a person who has dealt with pain and privation and is now happy and safe and providing, it makes it a lot easier to simply appreciate her — and no, you don’t have to love the song to do that.

Carey also said of her kids: “I love giving them gifts, because the act of opening up a ton of presents is something I wasn’t able to do as a child.” Yes, her life is often lavish, she can indeed be a diva, and she admits that, but she appreciates what she has and what she can do for others, and that’s something we should all be able to appreciate along with her. “I love Christmas. I had some very sad Christmases as a child, but I always try to find the bright light there,” Carey said. We can all do the same.

“When you grow up with a messed-up life and then you’re able to have this transformation where you can make your life what you want it to be? That is joy for me,” the “All I Want for Christmas Is You” singer, 52 at the time of this writing, told W magazine. She added:

“That’s why I want my kids to have everything they can have. I want them to be able to understand that they can be anything they want to be.”

It’s a beautiful sentiment this time of year, the idea of change, magic, and making your life what you want it to be.