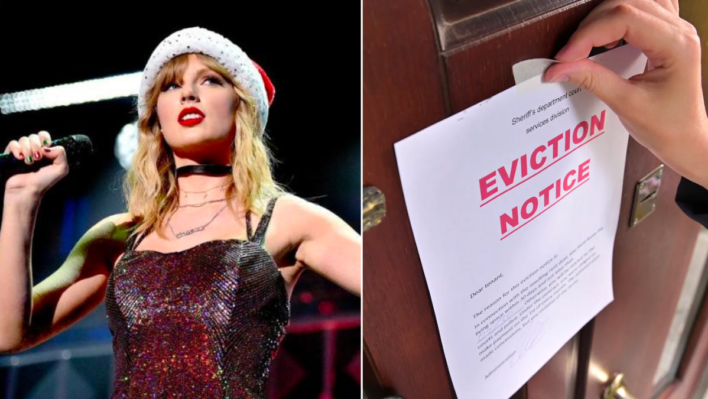 When an unjust news headline triggered Taylor Swift, she drew on an unusual relic to rekindle our belief in miracles.
By Bryan Liquor    December 13, 2022

When an unjust news headline triggered Taylor Swift, she drew on an unusual relic to rekindle our belief in miracles.

While she’s often in the headlines, on this day pop star Taylor Swift was reading them, and one story didn’t sit well with her. It was a Washington Post article profiling families who fell behind on rent and were facing eviction on Christmas.

Two stories in particular about a couple of mothers really touched Swift. The first was fellow Nashville native Nikki Cornwell. $4,000 behind in her rent and her water shut off, she was at her breaking point.

“I’ve had bad moments, but never anything like this,” she said. Cornwell had already pawned her jewelry and sold her son’s prized Playstation for food.

The second was Shelbie Selewski of Michigan. She was over $2,000 behind in rent and her electricity had been shut off. After begging friends and family for help, she was down to her last dollars. To add more stress, her new baby was in fragile health after being born with a collapsed lung.

“It has been the worst year ever. I’ve watched everything I’ve worked for go away,” she said.

Both moms made GoFundMe pages, hoping for a miracle. Little did they know, their prayers were about to be answered by a pop princess.

Never one to back down from lifting someone in need (Especially mothers), Swift had ample motivation to make some Christmas magic. In a strange twist, her gesture had links with a famously cursed number.

While most view the number 13 as a bad omen, it’s long been known that they’re Swift’s lucky digits, and not just due to it being her birthday (December 13th).

According to NickiSwift, the number has many ties both to her album and individual song success. For example, her first album went gold in 13 weeks. As well, her first #1 song had a 13-second intro. Swift will often write the number on her hand for shows to bring good luck.

RELATED: Sophie Turner and Joe Jonas’ Comments About Taylor Swift’s Music Will Change Your Idea About the Couple

Well, you can now add the names of a couple of shocked moms to the number 13’s small fan club.

Per Billboard, The 11-time Grammy award winner popped in on both moms’ GFM accounts with kind words and donations of – you guessed it – $13,000 for each.

In her message, Swift gave a nod to Cornwell’s bravery in making her struggle public: “It was really brave of you to share your story. I’m so sorry for everything you’ve had to go through this year and wanted to send you this gift, from one Nashville girl to another. Love, Taylor.”

How Taylor Swift Proved (Yet Again) That Miracles Can Happen

T-Swizzle then shared some heartfelt words for Selewski and her ailing baby: “No one should have to feel the kind of stress that’s been put on you. I hope you and your beautiful family have a great holiday season. Love, Taylor.”

While most of us might not have Swift’s deep pockets, we sure share her big heart and belief that no mother should stress like these two during the Holidays. That is all the motivation any of us need to reach out and make someone’s day.

With so much gloom around, it’s always nice to have someone like Swift remind us that great things happen when we least expect them.