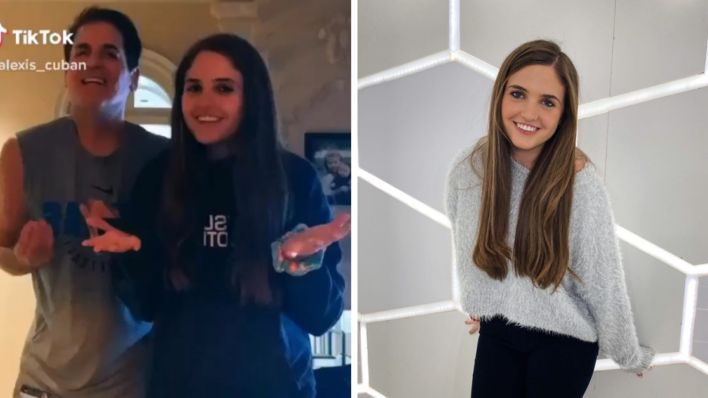 Mark Cuban became a billionaire by investing in tech. But despite all of his experience, his three children — daughters
By Goalcast    September 19, 2022

Mark Cuban became a billionaire by investing in tech. But despite all of his experience, his three children — daughters Alexis Sofia Cuban and Alyssa Cuban, and son Jake Cuban — are the ones keeping him up to date with the pros and cons of the latest apps.

Mark Cuban is worth $4.2 billion, according to Forbes, due largely to selling Broadcast.com to Yahoo in 1999. Owner of the Dallas Mavericks, Cuban has also become a TV personality and business guru through his role as an investor on the reality show Shark Tank. However, despite all of his know-how in the tech world, Cuban is still learning, thanks to his children.

Mark Cuban’s oldest daughter is Alexis Cuban, age 19. And, like many her age, she loves TikTok. She has more than 388,000 followers who watch videos of her dancing to popular songs.

But Alexis’ most popular videos include father Mark Cuban, who has a good time participating in the next generation’s technology by dancing along to the songs. He and Alexis even recorded themselves in 2019 rocking out to the Boston metal band Unearth. (“Long stop lights gone wrong,” the billionaire wrote.)

Cuban has also learned how “intellectually stimulating” the video game Minecraft can be from his 12-year-old son Jake, according to CNBC.

But one of the biggest things Mark Cuban has learned from his kids is how dangerous modern technology can be.

Cuban said that, when Alexis was younger, he made her turn off her phone at 10 p.m. during the week, and 11 p.m. on weekends. He also figured out a clever workaround to make sure Alexis and her two younger siblings, Alyssa and Jake, were not wasting away on apps into the night.

Cuban Limited His Kids’ Screen Time, from Phones to Netflix

“I have installed Cisco routers … I have management software,” Cuban told CNBC in 2017. “So, it says what apps they’re using so I can shut off their phone activity. I’m sneaky as can be. And she hates it. That’s the downside of having a geeky dad, you know. I can figure all this stuff out.”

He also uses the router to restrict the children’s Netflix time.

“So, I try to stay one step ahead, and it’s good for me, too, because it keeps me abreast of all the new apps and all the new technology.”

“The more you know about technology, the more experiences you’ve had, and the more exposures you’ve had to the pluses and minuses,” Cuban told Arianna Huffington on The Thrive Global Podcast. “Obviously, once you see the downside, you try to protect your children from it.”

Mark Cuban said in a 2015 interview that his “biggest fear” is that his kids will grow up to be “entitled jerks” because of their father’s net worth. He wants them instead to make their own money rather than grow up rich off his fortune. But the billionaire has shared a bit of his money by bribing his three children to stop spending too many hours in front of a screen.

“I’m not going to lie, I paid my son $150 to not watch [Minecraft] videos for two months,” Cuban told CNBC. “But he could earn if he watched math videos, or did math problems for me, he could earn time to watch Minecraft videos.”

Cuban Thinks Snapchat Is No Substitute for a Newspaper

Cuban grew up watching his parents read the newspaper, which inspired him to do the same thing. But Alexis Sofia Cuban doesn’t have the same drive to read ink on paper. Instead, she gets her news from discovery on Snapchat, which her father doesn’t think is enough.

“I’m on Snapchat, I get to see the discover right? It’s not the same,” he said.

“It’s [an] OK way to keep up, but trying to get them to engage and learn more outside of school is a challenge,” Cuban added. “Now it’s that way for every 13-year-old regardless of what decade you live in or were born in, but trying to push them in that direction — there’s no easy solution.”

Learning from the Next Generation?

Parents get so caught up in teaching their kids that they often forget that sometimes the best teachers are the next generation.

Take this as a great reminder to listen to what your kids have to say and to learn from the things they love — but at the same time, it’s important to share your wisdom, especially when it comes to the dangers of modern technology.

Mark Cuban’s Daily Routine Includes Waking Up at 6:30 to Tackle This Surprising Task