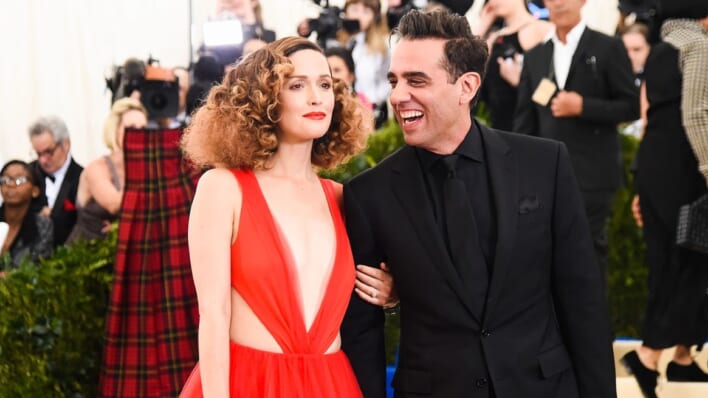 They might not be officially married, but having spent a decade together building their home, family and careers, they refer to themselves as “husband and wife” because they “hate all the other words.”
By Laurence Lerman    October 14, 2022

They might not be officially married, but having spent a decade together building their home, family and careers, they refer to themselves as “husband and wife” because they “hate all the other words.”

There’s no denying that Rose Byrne and Bobby Cannavale have a distinctive arrangement when it comes to their modern, respect-filled and supportive relationship.

RELATED: Why Keira Knightley and James Righton’s Marriage Teaches Us The Value of a True Partnership

Perhaps it was fated to be a unique union from the get-go, considering that each of their backgrounds and entries into show business could not be more different from each other.

Rose and Bobby Met Each Other Through Mutual Friends

Byrne was born in Australia and began taking acting classes at the age of 8 before joining the Australian Theatre for Young People. She nabbed her first gig at 16: a featured role on the popular Australian soap opera Echo Point, where she stuck with for the show’s entire five-year run. The movies beckoned next and in 1999, she co-starred opposite another Down Under up-and-comer, Heath Ledger, in the hip Australian crime thriller Two Hands.

RELATED: Antonio Banderas Didn’t Give Up On Love Despite Being In A Disastrous First Marriage

Byrne’s profile grew as she starred in more Aussie flicks, leading to supporting roles in such Hollywood movies as Troy and Sunshine, and not soon thereafter, starring roles in the acclaimed series Damages and the comedy smash-hit Bridesmaids.

New Jersey-born Cannavale never pursued formal training, getting his start in the mid-1990s by auditioning for small parts in movies like Night Falls on Manhattan, I’m Not Rappaport and Gloria, while working odd jobs to pay the bills. His big break came in the form of a featured role as a New York City paramedic on TV’s Third Watch in 1999, which kickstarted his professional ascent. Over the next two decades, Bobby would pick up bigger and juicier parts in a variety of films, television show and theatrical productions.

But even as they continually built up their careers, Byrne and Cannavale managed to make time for a budding romance after they were introduced to each other through mutual friends in 2012.

Rose, Bobby and Their Young Sons Live in Brooklyn

Byrne and Cannavale began dating and quickly fell for each other, moving in together in New York City’s East Village, before making the leap to the fashionable borough of Brooklyn in 2015 (making them the latest high-profile acting couple to move there, following Keri Russell & Matthew Rhys and Maggie Gyllenhaal & Peter Sarsgaard).

They welcomed first child, son Rocco, in 2016, and then their second, Rafael, only a year after that.

As their acting careers and brood continue to thrive, Byrne and Cannavale are a living proof that that the family that plays together can also grow while working together!

RELATED: Anne Hathaway ‘Fell in Love Like a Fool’ When She Met Adam Shulman

The two have teamed up on a number of projects over the course of their relationship, led by a handful of films over the past decade, including the indie drama Adult Beginners, a studio remake of Annie, the comedy Spy (which found them playing deliciously comical villains!) and most recently, the Australian comedy-drama Seriously Red.

Byrne and Cannavale are ready to go at it again as they’ve both recently signed on to co-star in the upcoming comedy Inappropriate Behavior, wherein they portray, humorously enough, a divorced couple. The film also stars Robert De Niro and Vera Farmiga.

Most notably, at least in terms of it being a genuine thespian accomplishment, the Brooklyn-based couple worked on stage together, taking on the lead roles in the Brooklyn Academy of Music’s contemporary retelling of Euripides’ Medea.

The plot of the ancient Greek tragedy centers on sorceress and former princess Medea and her reaction when her husband Jason (Cannavale) leaves her for another princess. Medea takes her vengeance on Jason by killing his new wife and her two sons, after which she makes her way to Athens to begin a new life.

Rose and Bobby Starred On Stage in the Classic Tragedy Medea

It’s fascinating to consider that Byrne rehearsed and then performed the murder of her own and Cannavale’s sons every night at BAM before the two headed home to their own real-life kids! Ah, the theater…

That said, Byrne described the experience of working with her husband in Medea as “exciting, challenging, [and] terrifying.”

Equally distracting and even a bit upsetting was not being around for boys while the play is running, though she was excited about taking on the legendary role.

“You have two parents not putting kids to bed. That’s the biggest part of the decision,” says Byrne.

With with an impressive portfolio of work behind them and a growing family and career opportunities ahead, the pair have put the idea of getting married on the back burner, at least for now.

Byrne and Cannavale claim to be baffled by the public fascination with their personal lives and the question of whether or not they’ll make their coupling legal.

“It’s way more interesting for other people than it is for us,” Cannavale said during an interview alongside Byrne prior to the opening of Medea.

“We’re not doing this to do interviews about our relationship, even though that’s what we’re doing right now,” Byrne added, well aware that it’s the kind of question that they should expect when promoting a play. “I know you’re just doing your job.”

Rose and Bobby Refer to Themselves as “Husband and Wife”

It’s not that Byrne and Cannavale are opposed to marriage, but apparently their schedules and the assorted actions of a high power are standing in the way of making their inseparable relationship an “official” one.

“I love weddings, and I know people [for whom] it’s an important thing, and I respect that totally. I guess for us it’s just been, we didn’t do it, we’ll do it, then — no! Pandemic,” she added.

Whether there’s a piece of paper legally stating they are married or not, the relationship that Byrne and Cannavale have appears to be working perfectly. And they’re also comfortably referring to themselves as being “married,” anyway.

“He’s practically my husband, so calling him that is easier,” Byrne said while talking openly about their low-key “marriage” and explaining that their decision to call each other husband and wife came about because they “hate all the other words.”

“’Boyfriend and girlfriend’ feels so young,” says Cannavale. “And “partner” feels so sterile.”

Then husband and wife it is, Bobby and Rose!