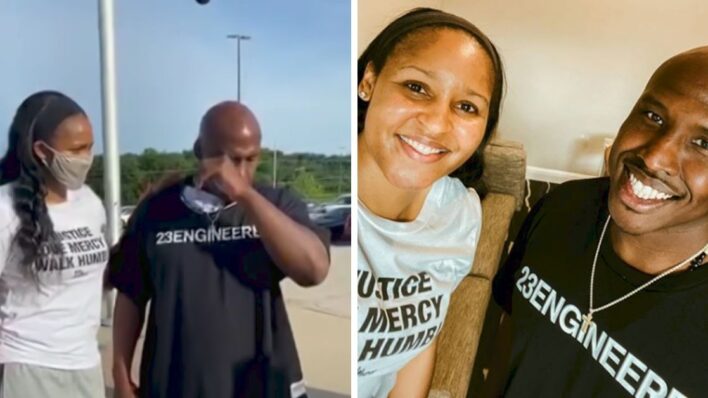 Former WNBA player Maya Moore left basketball to fight full-time for Jonathan Irons, a man who spent 22 years in prison after being wrongfully convicted for a crime he did not commit.
By Kawter    July 2, 2020

Former WNBA player Maya Moore left basketball to fight full-time for Jonathan Irons, a man who spent 22 years in prison after being wrongfully convicted for a crime he did not commit.

Former athlete of the Women’s National Basketball Association Maya Moore was at the height of her career when she made the decision to quit. She had won four championships with her team the Minnesota Lynx and was even honored with an WNBA MVP title but none of that mattered to her.

Two seasons ago, she made the decision to focus on what mattered to her most–and Jonathan Irons’ tragic story was first on her list.

They first met Jonathan back in 2007

Maya spoke to Good Morning America and detailed the incredible story. She quit everything to focus on Jonathan’s case.

“When I stepped away two springs ago, I just really wanted to shift my priorities to be able to be more available and present to show up for things that I felt were mattering more than being a professional athlete,” Maya said.

Maya first met Jonathan back in 2007, before she started her freshman year at the University of Connecticut. They became friends through a prison ministry program that her extended family participated in. Ever since then, she has been fighting relentlessly, bringing awareness to his case.

Jonathan’s case is particularly touching. When he was just 16 years old, he was wrongly identified in the lineup of suspects for a buglary and shooting at the home of Stanley Stotler. At the time, the all-white jury convicted him. He spent the next 22 years in prison.

An important piece of evidence exonerated him

Jonathan always maintained his innocence but it took years and years of struggling for him to finally be proven innocent. There was a fingerprint report that could have proven Jonathan’s innocence but was never provided to the defense. This, amongst other details, indicated that the case had been badly handled and his sentence was overturned.

When Jonathan was released, Maya felt she was finally able to resume life as before.

In that moment I just — I really felt like I could rest.

“I mean I’ve been standing and we’ve been standing for so long — it was an unplanned moment where I just felt relief … it was kind of a worshipful moment just dropping to my knees and being so thankful that we made it,” Maya told GMA.

“I’m absolutely elated and thankful just to be here in this moment right now,” Jonathan said, after being released.

Now 40, Jonathan said he holds no grudge against the man who mistakenly put him behind bars. “I believe at some point if not already, maybe later on, he’s going to be hit with a lot of guilt,” Irons said.

“I want to let him know that he has a safe place to rest because I do forgive him,” Jonathan continued. “I don’t blame him or fault him in any way.”

As for his life after prison, Jonathan expressed that he wants to give back.

“I want to be able to reach back and help other people. I want to advocate for people who are less fortunate. I want to help people with their cases. I want to speak to positive change and be a part of the rebuilding process from where we’re at right now because there’s so much greater coming in the horizon and I see it,” John said.

Maya hopes this will inspire others to show up for justice

Jonathan’s release is the best conclusion to a fight Maya has been relentlessly carrying for years. “For the first time in my adult life I’m trying to live in the moment,” Moore said.

I haven’t really been able to have the fullness of the rest that I wanted … now is the time to take a break then seeing what the future holds, maybe around sometime next spring.

Additionally, she has some insights and tips for those who want to get involved and help bring justice to other victims of the criminal system.

“The first step for anybody is … I would say get to know somebody who isn’t exactly like you and doesn’t come from the same background as you, educate yourself and then just keep showing up,” Maya said.

If Maya’s story can teach us anything, is that standing up for justice is never a useless fight. Even if it takes years, lending our voices and support to victims is an invaluable contribution to helping them get the justice they deserve.