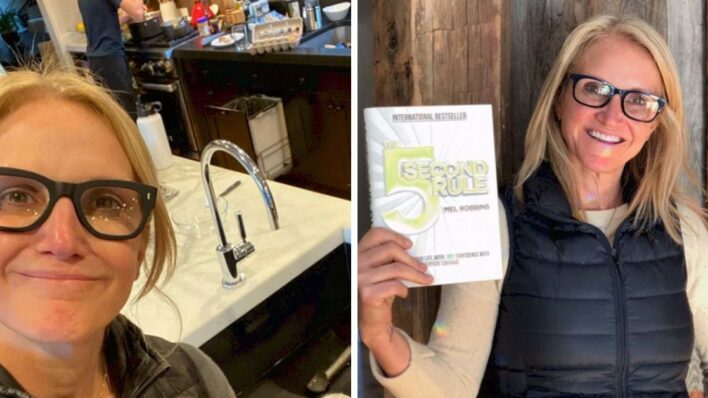 Mel Robbins went through a very rough patch in her life and came out of it with a previous lesson on how to completely change your life, no matter what.

Mel Robbins went through a very rough patch in her life and came out of it with a previous lesson on how to completely change your life, no matter what.

At 41 years old Mel Robbins had hit rock bottom. Her husband’s restaurant business started off as a success but quickly collapsed leaving them with $800,0000 worth of debt. Facing bankruptcy, alcohol addiction, and a spiraling marriage, Mel felt like a complete failure.

Every morning when the alarm went off, she knew she had to get up, but anxiety about her situation made her continuously hit the snooze button. She wanted to change but just couldn’t make herself do it.

Then one day, while she was watching TV, she saw footage of a rocket launching. From that moment, she told herself that she was going to launch herself out of bed like a rocket every morning without making any excuses.

So the next morning when the alarm went off, instead of lying there thinking about her problems, she pretended NASA was there watching her and gave herself 5 seconds to get out of bed. By counting down 5-4-3-2-1 she beat her habit of hitting the snooze button.

And so the 5 Second Rule was born.

Our brain is here to protect us from anything scary or difficult. It is designed to protect us from danger and keep us alive, so it develops these coping mechanisms and habits to stop us from doing anything that might hurt us. But really, by keeping us safe, it’s actually keeping us from growing into our fullest potential and fully experiencing life.

If you want to change your life, you have to do something scary. The moment Robbins woke up to the realization that she had to stop hesitating and take action before her mind could convince her otherwise, her life began to change.

“If you have an instinct to act on a goal, you must physically move within 5 seconds or your brain will kill it.”

The 5 Second Rule essentially helps to get you out of the place between knowledge and action, which she calls the Knowledge-Action gap. It’s the place where you know what to do but can’t seem to make yourself do it.

If you’re feeling stuck, you’re in your head. You’re thinking. It’s a universal problem. We know what to do but we hesitate and think about whether we feel like doing it. And then we make little decisions all day long that keep us from experiencing the life of our dreams.

“If you do not take action on your instinct to change, you will stay stagnant. You will not change.”

Act on your instincts

Mel Robbins says that first, we need to get clear about what instinct really means. Instinct isn’t a rash, irreversible decision that involves destructive, harmful, or illegal behavior.

“I define an instinct as any urge, impulse, pull, or knowing that you should or should not do something because you can feel it in your heart and gut.”

She calls them instincts of the heart. “Instincts are the moments where your heart speaks to you.” Your instincts are these urges that tell you to do something even when you don’t feel like doing it.

Mel explains that when we’ve set a goal or intention, our brains create a checklist and then keep reminding us of that intention through these small impulses to do things. The most important thing we can do is to develop the skill of knowing how to hear that inner wisdom when it kicks in and acting on it quickly before hesitation.

There’s a reason why scientists call the gut our “second brain.” Our gut is trying to communicate with us.

We get these ‘gut feelings’ when our hearts and minds are trying to tell us something. And usually, these gut impulses are tied to greater goals.”

First, you need to identify the gut feelings that are tied to your goals and begin noticing them throughout the day. Whether it’s the impulse to go for a run, to call a friend, to speak up in a meeting, to eat something healthy–whatever it may be–applying the 5 Second Rule will help you act on those impulses in moments where you would usually hesitate.

Remember, your brain will try and protect you. So you need to push yourself.

Your brain wants to shut this instinct down. It’s going to do it.

But that’s the moment where you can choose to take control. Don’t think, just do it. One push at a time. It’s not supposed to be easy and it will be scary.

You know what you need to do. You know it deep within. And it’s the wisdom that comes before the self-doubt comes creeping in.

“It’s hard to push yourself. If you want to change, it’s something you MUST do. And the Rule makes it easier.

Just start your countdown. Push yourself to start at 5. Just start counting. That’s it!

Do it before the brain kills it

If you don’t act within the 5 second window your brain will talk yourself out of it. Fact.

Mel describes our brain as an “overprotective, irrational parent” that thinks it’s keeping you safe, but is in fact stopping you from growing as a person and living your dreams.

When you hesitate or feel uncertain, you are signaling to the brain that something’s wrong so it automatically steps in to protect you.

You know that there’s nothing dangerous about making a call or taking a walk or pursuing your dreams. But your brain doesn’t know that, and it tries to sabotage you.

The 5 Second Rule interrupts what researchers call ‘habit loops’ that get encoded in your basal ganglia – the part of the brain responsible for your feelings, emotions, and behaviors. So when you count 5-4-3-2-1 you interrupt your habitual brain and move to the prefrontal cortex – the part of the brain that’s awake and used when you’re learning something new.

The 5 Second Rule is a way to outsmart your brain by changing hesitation into ACTION.

This simple tool has transformed thousands of people’s lives. So next time you have an impulse to do something, try out the 5-second rule and watch what happens.

Desperate Mom Tries To Sell Family Heirloom, But Jeweller Rejects It – What He Did Next Brings Her To Tears