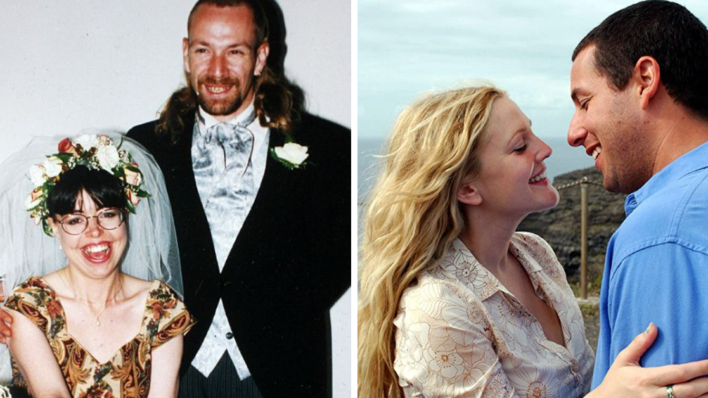 She Can’t Form New Memories, So He Shows Her Pics Of Their Wedding Every Day

Some Hollywood stories were made for real life.

Thousands of miles away in Spalding, Lincolnshire, lives the real-life couple — a wife who won’t give up and a husband whose patience and love have no limits.

I don’t know who you are, Henry… but I dream about you almost every night. Why?

In the movie, we discover that Barrymore’s character, Lucy Whitmore, lost her memory from a recent car accident.

She wakes up every morning having forgotten anything about the day before. That includes her affection for Henry, a vacationing veterinarian who’s smitten with her.

Like Lucy, Michelle Philpots’ memory was also affected due to a vehicle accident. Doctors ultimately diagnosed her with anterograde amnesia.

It’s defined as “a loss of the ability to create new memories after the event that caused amnesia, leading to a partial or complete inability to recall the recent past, while long-term memories from before the event remain intact.”

For Michelle, that means waking up every day thinking it’s 1994, when Ace of Base sat atop the music charts and ‘Forest Gump’ was the year’s blockbuster film.

I wanted to be back to the normal me and not this shell of a person. I want my career back. I want to be able to say, ‘I remember when’ again — but knowing [that’s] the life you’ve lost, you can’t do it.

Michelle uses hundreds of Post-It notes and keeps reminders on her phone’s calendar to avoid forgetting the small tasks most of us take for granted. She also has to log every interaction for future reference.

Even more troubling is that although Michelle met her husband Ian in 1985, they only got married in 1997. Meaning every day she wakes up with no recollection of their wedding day.

In the movie, Henry courts Lucy every day as if it was their first time together. His surprise “Good morning Lucy” tape reminds her of their wedding day.

And just like Sandler’s character, Ian is determined to make his wife fall in love with him every day. Each morning, he shows her pictures of their wedding day, sharing those moments to jog her memory and bring a smile to her face.

Can I have one last first kiss?

Although it can be trying at times, Ian never gets daunted, determined to rekindle their memories as a couple.

It can be very frustrating for me but I have to be patient and understand. I have to keep calm because I love her

Love is worth fighting for

Michelle works constantly to try to improve her condition. She can now recall up to six numbers by punching them into a telephone keypad.

Although it has been a struggle, her husband Ian has been by her side, recreating the moments that her accident has erased.

When Ian looks at Michelle, he sees the woman he loves. Just like Adam Sandler’s character, he’ll do anything to make sure that Michelle reconnects with the man she married.