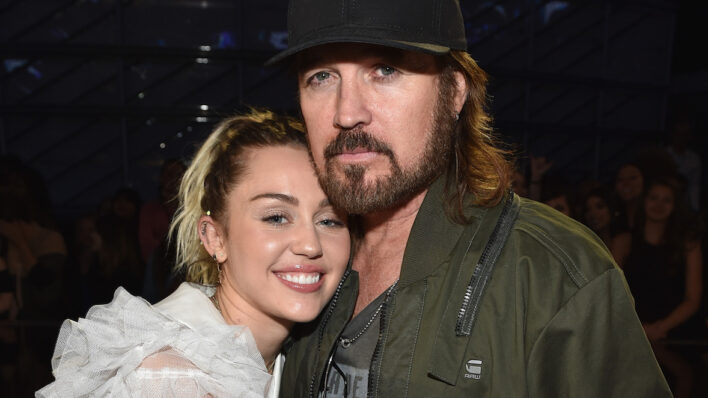 How Miley Cyrus Repaired Her Relationship With Billy Ray Cyrus

Miley Cyrus’ very public scandals were difficult to digest for Billy Ray Cyrus, but they two worked past their broken relationship.
By Aly Walansky    July 22, 2020

Miley Cyrus’ very public scandals were difficult to digest for Billy Ray Cyrus, but they two worked past their broken relationship.

Miley Cyrus may have started out in the limelight as country music star Billy Ray Cyrus’s daughter, but within a few short years, she became the much bigger name. Yet, her rapidly growing popularity nearly destroyed their family.

Much like other child stars like JoJo, Macaulay Culkin or Frankie Muniz, Miley’s fame eventually caught up to her, sending her into a dark hole of scandals. Her father had to watch it unfold right before his eyes, alongside the rest of the world.

This was certainly not an easy thing to go through and for the longest time, Billy’s darling daughter was lost to him…

Miley’s Hannah Montana days were the prelude to disaster

Miley was only 12 years old when she starred in Hannah Montana. The role quickly turned her into a household name. In fact, Miley grew up in the persona, alongside her young audience, until she reached the age of 18. At that time, she felt the shift within herself.

Inhabiting the fictional persona of Hannah Montana for so long became a burden to 18-year-old Miley, who wanted to be seen as her own person.

This was something the world wasn’t ready to accept. The pressure of leading a double life led her to a pretty wild phase, starting with a leaked video of her getting high on the psychedelic herb salvia.

At the time, Miley blamed it all on her starring in Hannah Montana. “The damn show destroyed my family,” Miley told GQ magazine in an interview for its March 2011 edition. She expressed deep regret at the world seeing that side of herself.

“I’d take it back in a second. For my family to be here and just everybody be okay, safe and sound and happy and normal would have been fantastic. Heck, yeah. I’d erase it all in a second if I could.”

However, 8 years later, in an interview with Elle Magazine, Miley reflected on that event in her life and her perspective changed. She realized it was not fair for her to try to live up to everyone’s high standards.

“The minute I had sex, I was kind of like, I can’t put the f—ing wig on again. It got weird,” she told Elle Magazine. “One time I went backstage at Disneyland, and Peter Pan was smoking a cigarette. And I was like, ‘That’s me. That’s the kind of dreams I’m crushing.”

I’m not a Disney mascot. I’m a person.

Hannah Montana launched in 2006 and ended after four seasons in January 2011. Right after that, Billy Ray Cyrus filed for divorce from his wife Tish after a 17-year marriage. While Tish and Billy eventually dropped the divorce, deciding to get therapy and work on their marriage.

However, that divorce was destabilizing for the young starlet and Billy Ray Cyrus felt especially responsible for his daughter’s subsequent descent into a dangerous path. After all, he was a celebrity before her and knew how the industry could be dangerous, even predatory.

“I’m scared for her,” Cyrus said of Miley in a GQ Interview 2011, after the infamous salvia video reached the public. “She’s got a lot of people around her that’s putting her in a great deal of danger. I know she’s 18 but I still feel like, as her daddy, I’d like to try to help. Take care of her just a little bit, to at least get her out of danger.

“I want to get her sheltered from the storm. Stop the insanity for a minute. When you go through what she’s been through, it takes a beating on you,” he said.

I’d take it back in a second. For my family to be here and just everybody be okay, safe and sound and happy and normal would have been fantastic. Heck, yeah. I’d erase it all in a second if I could.

Billy Ray Cyrus, blamed himself for that wild phase, saying he wished he had disciplined Miley more, rather than wanting to be her friend.

I almost feel a little bit bad as a daddy saying it, but I’ve always been a better friend to Miley than I have been a daddy.

“I should have said, ‘Enough is enough — it’s getting dangerous and somebody’s going to get hurt’. I should have but I didn’t. Honestly I didn’t know the ball was out of bounds until it was way up in the stands somewhere,” he said.

Miley was thrown to the wolves for being provocative

Miley’s “wild phase” was not done yet. Who could forget Miley’s infamous VMA performance in 2013 with Robin Thicke? The world was shocked by the provocative outfit and dancing that definitely cemented Miley’s break from her Hannah Montana image.

“Not only was culture changed, but my life and career were changed forever,” Miley told Wonderland Magazine. The performance attracted a lot of backlash for being so provocative. And at 22 years old, Miley was the one who received the brunt of it, as Robin Thicke denied having any prior knowledge of the choreography.

But Miley denied that. In fact, she stated that Robin fully knew about it.

“He wanted me as naked as possible, because that’s how his video was,” she continued. Of course, with the double standards of the entertainment industry, Miley could not escape unscathed, unlike Thicke. That was something she was completely aware of. “It was funny, because I got so much of the heat for it, but that’s just being a woman,” she said.

Not long after the performance, Miley was hit with another hard blow: she and Liam Hemsworth announced that they had split. Liam cited the fact they “were going in different directions and it’s just what needed to happen,” as the reason behind the split. Although they never confirmed it, many had speculated that it had much to do with Miley’s shocking VMA performance.

Billy never stopped believing in her

Miley’s relationship with Liam was not meant to last, even after they reconciled and got married. However, throughout the whole turmoil, one thing remained constant: her father’s support.

Yes, like any other father, Billy found it challenging to witness his daughter’s mistakes but he didn’t completely shut her out of his life. As Miley got past that wild stage and matured, the two did eventually repair their relationship.

In fact, when Miley found out of her father’s wild side in his younger days, it helped the two of them rebuild their bond. “We have a different relationship now,” Miley continues. “Now I hear all these crazy stories from him. Like, I never knew my dad smoked weed. I thought my dad was a freak. Now I know he was just stoned.”

This common ground helped them realize that everyone makes mistakes when they are young. It doesn’t mean that they’ll be that person forever. In fact, 27-year-old Miley is proudly sober. “I’ve been sober sober for the past six months,” she told Variety.

The decision followed a vocal surgery she underwent, but it was also strengthened by her reflection on her family’s history with addiction. In that sense, she has come a long way from her partying days and she maintains that she is no less fun.

It’s really hard because especially being young, there’s that stigma of ‘you’re no fun.’ It’s like, “honey, you can call me a lot of things, but I know that I’m fun.’

In a 2013 interview with Rolling Stone, Miley says that she sees her parents about once a week. “My dad’s always home,” she shares. “He’s like, ‘There’s nothing for me to do out here.’ So he chills at the house all day, and I go see him.”

Billy never stopped believing in her

“She’s just Miley,” he told Piers Morgan in an appearance on CNN. “She’s an artist. She’s real. I think that what’s happened over the years, Miley has been reinventing her sound. She’s evolving as an artist herself. I think that all of what everyone is calling controversy now, that’s still my Miley.”

Much like her career and public image, which she has transformed completely, Miley’s personal relationships continue to evolve. Billy and Miley have learned to be mentors to each other.

Billy Ray may have mentored his daughter in her Hannah Montana days, but now it’s Miley giving him career advice. According to CMT, Miley advised, “If the world says go left, go right.”

Never give up on the people you love

Even for us non-famous folk, it’s sometimes hard for parents to see their children move on and create a world of their own as adults. This was true for the Cyrus family too, but as they learned to let go and evolve, they were able to repair their relationship and find each other again.

“Somewhere along the stress and strain of different things I didn’t see her smiling as often for a little while and, all of a sudden she’s like the sun… Everything happens for a reason and the main thing for me, as Miley’s daddy, is she’s happy,” said Cyrus, according to Huffington Post.

Miley, too, seems to be happy and adjusted, and her relationship with her father is again strong. It’s all about redefining roles and accepting each other for who we are. Mainly, it’s important to understand that mistakes happen and we can all grow and learn from them. Mistakes don’t need to destroy your relationship with a friend or a family member.