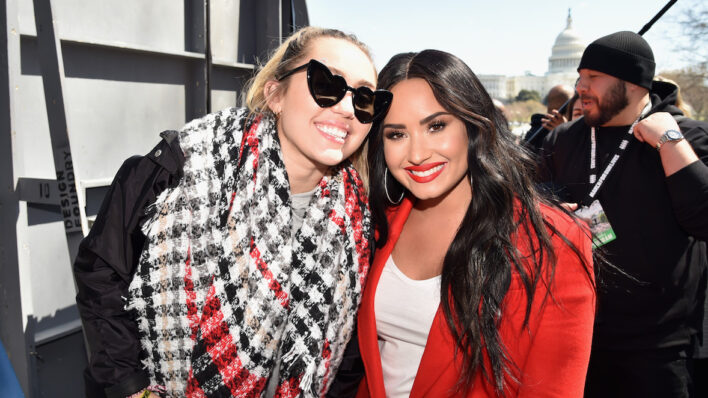 Miley Cyrus and Demi Lovato grew up in front of the spotlight. While they represent figures of confidence, the two have dealt with severe body image issues.
By Aly Walansky    May 4, 2020

Miley Cyrus and Demi Lovato grew up in front of the spotlight. While they represent figures of confidence, the two have dealt with severe body image issues.

Miley Cyrus is one of many celebrities spending a lot more time on social media during self-isolation and quarantine. And that involves doing a fair share of Instagram Live videos. Most recently, she did one with Demi Lovato.

On March 17th, Miley and Demi chatted on Instagram Live about different tactics they are using for dealing with self-quarantine during the pandemic.

There was a heavy dose of nostalgia, as these two have been friends since they were teenagers. “You’ve always been such a light, and that’s why we connected at 14. I had a f*cking gap in my tooth. We connected then because we saw something in each other. I don’t know if it was spirituality or if it was just in our hearts…”

And their discussion has brought interesting things to light, especially the less obvious ways in which self-esteem and body image issues can resurface during times where we are isolated.

The issue of body image

The issue of body image

Eventually, Miley and Demi started to touch on how they had both grown up with their share of body image struggles that was made worse by being in the spotlight.

My whole purpose in coming clean with everything that I’ve been through is so that it will help someone.

“I remember being 12 years old and my body started changing, and I didn’t have anybody [to look at] in young Hollywood at that time that had a normal body, it was just stick figures because that was what was in style. I made a vow to myself that when I get older I wanna represent what I didn’t have. I want to be that for somebody.”

Miley reflected on an MTV Video Music Awards performance as a big moment because after that, people were making memes of her body and comparing it to a turkey.

I didn’t wear a bikini for two years [after that]. Memes can be so funny but also so hurtful. That was such a wake-up call to me for wanting to use my platform for a bigger purpose.

These body image issues changed how Miley lived and what she wore. “I wouldn’t wear shorts. I wouldn’t wear skirts on stage … I was probably 21 and just starting to understand myself as an independent person,” she confessed.

What was so hard about it is that my brand has always been about being so unapologetically myself.

“I felt like having this persona, being the most confident girl on the planet, was actually kind of a fraud. I wasn’t wearing bathing suits or shorts, and when I was wearing my little leotards and things, I had on f*cking four pairs of tights because I was so insecure.”

The two pop queens have grown up in front of the cameras from a very young age. Being exposed to the world’s scrutiny, and having to witness the nasty comments of strangers can certainly follow you for life. This is exactly why the two are using their voices to bring attention to body-shaming.

Quarantine: forced to confront our demons

Thankfully, they are both in a better and different place now, but they’ve recognized how quarantine makes it easier for negative feelings about their bodies to return.

“This goes for everybody. We’re confined into these spaces, with the same mirrors, the same negative thoughts” Demi continued. “It’s important not to beat ourselves up over getting nervous or not eating perfectly or working out perfectly.”

“These are different, very scary times. We’ve never been through this. It’s OK, be gentle with yourself as much as possible,” Demi concluded. Miley and Demi are right. Isolation is going to stir the pot of any old trauma, and anything that’s unhealed.

It’s like  swimming in a dirty fish tank… in your own junky stuff and everyone else’s.

If you have been feeling the same old self-esteem issues arising again, know that you are not alone. During this lockdown, we are all being asked to face ourselves now. We are literally being held in place, with no escape and little diversion.

When we are leading an active life, commuting to work, socializing with colleagues and friends, body image issues can take a backseat in our minds. Without the escape of our old daily routines, we must find a new way to address the challenge.

Here are a few things that help:

1-Instead of focusing on food and appearance, focus on soothing and calming the noisy chatter rattling around.

1-Instead of focusing on food and appearance, focus on soothing and calming the noisy chatter rattling around.

“Drop into your body, out of your head. Put a hand on your heart, close your eyes, feel in.. Our hearts hold compassion and so much energy that can soften and soothe the raggedy thoughts and beliefs,” said Lisa Claudia Briggs- MSW, an intuitive coach.

“This is like a ‘laying on of hands’… for yourself,” explained Briggs. “Feel into the comfort there.. take 5-10 real breaths.. When you’re thinking painful thoughts, you’re likely in fight-or-flight.. so you’re pumping out stress chemicals.”

It’s all about allowing yourself to slow down. “Doing this will stop that, and allow you to slow it down. Just this alone helped a client of mine who’d had bulimia for 50 years!” said Briggs.

2-Create an affirmation for when you’re starting to go into the spin of self criticism and obsessing about your body or what you ate.

To do this, imagine you had a fairy godmother at hand. What words would you most want to hear from her? There you go.. that’s it.. repeat them as needed.

“My clients who had the best results…. all fell in love with using a journal. To me it’s about purging. All the lousy thoughts and feelings are stuck in the container of your body… writing lets you  move them out of the body, to drain a little ‘off the top’… to ’take out the trash” and put them all on the paper… a separate container,” said Briggs.

Give your thoughts space, but don’t hold them inside your body where they can take up all that space.

“Thinking or talking is not the same… we want to actually PUT the thoughts/feelings someplace else, out of your body… so you have space for something else. Especially while quarantined, we want to make SPACE wherever we can,” said Briggs.

“When we feel out of control, uncertain, creating bits of order can be soothing and also makes more space, which is part of what we’re craving. By refocusing our energy on improving our surroundings, we are shifting our attention away from negative thoughts,” said Briggs.

While stuck at home, you may notice certain areas that hold a lot of clutter and that pull at you, where you take an energy ‘hit’ when you pass by. This is a good time to let go of some stuff and make order.

Learn to appreciate your body

It’s a very common feeling. The fear of “weight gain” comes from “diet culture” and people need to begin having compassion for themselves as often times they are seeking comfort and comfort can be in the form of food.

“Sadly when people have more time on their hands they focus on their body image during this time of being thankful for everything their body can do for them,” said Robyn L. Goldberg, RDN, CEDRD-S, a nutrition therapist.

This is why it’s important to look at your body as a powerful vessel, to appreciate it for its help and strength–especially in a time where many are suffering or dying.

Appreciating little things that I would never have celebrated before. Appreciating the fact that I feel my frustration or uncomfortable in my body and just BE in my body without needing to justify it by doing or accomplishing or attaining a thing.