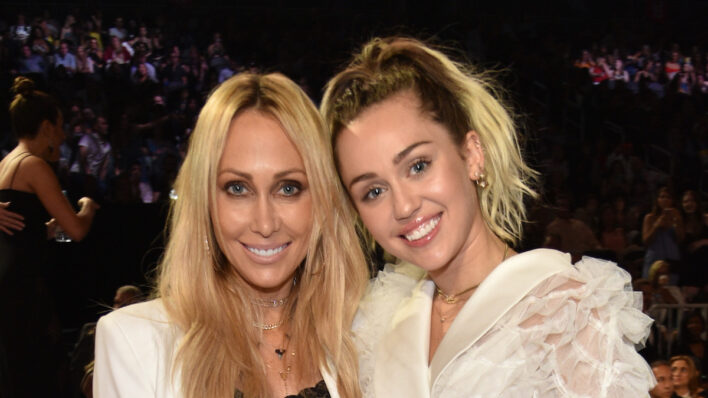 As Miley Cyrus’ manager, Tish Cyrus has seen her daughter go through a series of wild phases. Here’s how she’s dealt with it.
By Shaoni Das    March 22, 2021

As Miley Cyrus’ manager, Tish Cyrus has seen her daughter go through a series of wild phases. Here’s how she’s dealt with it.

Everyone is in the loop about Miley Cyrus and her country-music rockstar father, Billy Ray Cyrus. Together, they make up one of the most iconic father-daughter duos in the history of music. Yet, no one seems to know about Miley’s mother, and the role she’s played over the years in keeping the whole family together.

Miley’s role in Hannah Montana wasn’t just a springboard for the singer — it catapulted the entire family to widespread fame in a matter of months. A number of Miley’s siblings went on to launch their own music careers, and even Billy Ray was inspired to make an epic comeback by featuring in Lil Nas’ ‘Old Town Road.’

It’s a showbiz family through and through, which usually means there’s one “non-famous” person holding the boat steady — the rock who everyone can depend on without question. Tish Cyrus is the force of nature that ensures everyone is taken care of, their needs are met, and that they’re all striding along the right path.

By profession, she’s Miley’s manager and a film producer, but her effect on the Cyrus family extends far beyond that. So let’s take a few moments to explore her life and her relationship with daughter Miley:

Tish Cyrus was born Leticia Jean Finley in Nashville, Tennessee, on December 28, 1967. Not much is known about her early life, but Billy Ray wasn’t her first husband. In 1986, she married a local drummer named Baxter Neal Helson at 19 and welcomed two kids with him: Trace and Brandi. The marriage didn’t last, and Tish found her way into Billy Ray’s heart not long after.

The two welcomed Miley on November 23, 1992, and married a year after on December 28, 1993. What’s odd is that Billy Ray had managed to father another child with a different woman at the same time. His son, Christopher Cody, born to Kristin Luckey, was born on April 1992, a few months before Miley’s birth. Billy Ray may have been maintaining two romances simultaneously, but Tish took a chance on him anyway and proceeded with the wedding. Tish’s fourth child and the couple’s second, Braison Chance, was born in 1994. Noah Cyrus, the youngest of the Cyrus brood, was born on January 8, 2000. Upon marriage, Billy Ray had also adopted Tish’s kids from her earlier marriage, completing the final piece to their big, beautiful, blended family.

Billy Ray said that his record company warned him against marrying Tish, but he followed his heart and went through it. He was a colossal fixture on the country music scene at the time, having had his breakout with ‘Achy Breaky Heart.’ In contrast, Tish had been an extra on the same video and wasn’t considered suitable enough for the country rockstar.

To evade the spotlight and focus on parenthood to the best of their abilities, the two decided to move to a 500-acre farm just outside Nashville, Tennessee.

Tish “loved” Miley even when the latter was “pushing the boundaries”

From not being considered on Billy Ray’s level to surpassing him altogether in many ways, Tish Cyrus now stands as a proud and confident woman who’s effectively running her kids’ careers. Billy Ray received a significant amount of recognition for introducing Miley to the world, but it was Tish in the driver’s seat all along. She was the one to call the shots, handle the day-to-day agenda, and oversee all details concerning her daughter. It was her responsibility as Miley’s manager to keep her daughter in check and ensure that she followed the rules.

Tish said that she was “thrown” into this manager’s role just as the family had moved to L.A. for the show. She was her daughter’s only manager and adviser for quite a long time — heavy was the head that supervised a Disney sensation’s emerging but vulnerable career.

Tish Cyrus via Chicks In The Office

Alongside manager, Tish’s also played the role of a producer in many of Miley’s movies, including The Last Song, LOL, So Undercover, and many of her concert movies and docuseries. Miley’s fame and ambition have grown tenfold over the last ten years, so Tish now has a co-manager with whom she advises and takes care of the minutiae of Miley’s career.

Today, Tish acts as “momager” to both Miley and her youngest child, Noah. A lot of folks are apprehensive about “helicopter parents” who practically control every single aspect of their children’s work and treat them as cash cows. But Tish has always kept her daughters’ wellbeing at the top of her priority list.

Tish also added that she never felt the need to exploit her children as her she and her husband had a wealth of their own. So it was really about cultivating good values in her children and giving them the support they needed to succeed in their chosen careers. Tish said that she could still exercise her right as the mom to “ground” her kids and not suffer financially as a result. That’s what made the “momager” arrangement “work the best,” said Tish.

As for Miley’s wild phase, Tish said that she tried her best at stopping Miley when she could, but ultimately, it wasn’t in her hands. While Miley became somewhat estranged from her father due to her troublesome antics on stage, she and her mom always stuck it through thick and thin. It was her duty to remain by her daughter’s side, no matter what.

A lot of people assumed that Miley’s relationship with her mother would be just as fraught, but Tish’s resilience in the face of external pressure proved all her doubters wrong. When Miley was a “wild thing,” she didn’t back down and put distance between the two of them.

[Miley] grew up in the public [eye], there were those times where she was pushing the boundaries, and we were arguing. I was punishing her and jumping gates — you know, just being full mama bear. But I think she always knew I did those things because I loved her.

Tish Cyrus via Chicks In The Office

Tish and Billy have had a tumultuous, on-and-off marriage over the last ten years — something that you might see in a romantic comedy movie but not in a real-life couple. In 2010, Billy Ray filed for divorce from Tish, but by March of next year, he announced that he had dropped the case. The couple tried to work out their disagreements and gave their marriage a second chance.

However, two years later, Tish filed for divorce in June 2013, but within the following month, it was reported that the two had gone into therapy mode, were attending marriage counselling, and were trying intently to salvage their marriage. The divorce was automatically dismissed when both parties failed to turn up in court. “We both woke up and realized we love each other and decided we want to stay together,” said Billy Ray’s rep at the time. He also added that couples’ therapy allowed them to open up to each other in a way they hadn’t done before. They both realized that they didn’t want to be just another “statistic,” so they persisted in keeping their marriage strong.

As for Miley, Tish is the “love of [her] forever,” as she mentioned in one Instagram post. She may have experienced breakups galore, but her mom has been one calming constant in her life. Miley said in an interview once that her mother didn’t “feel a lot of value” as a child because she was adopted and given away by her biological parents. “But I totally worship her,” said Miley when speaking to Interview magazine.

In her song ‘Mother’s Daughter,’ Miley also revealed that she gets her rebellious spirit from Tish, saying, “Maybe it’s something in the water or that I’m my mother’s daughter.” So it’s crystal clear that there’s a solid sense of camaraderie between the two Cyrus women, even if their marriages don’t seem to work out all that well.

Embrace your loved ones even when they’re unpredictable

Tish’s stance on Miley’s “wild” phase demonstrates that she has always been a tremendous source of support and love for her daughter, even when she witnessed her daughter drawing trouble and causing controversy. As a former rebel child herself, she knew what it was like to disappoint your loved ones, so she made sure that Miley never went through the same wringer.

We can’t control what our loved ones do or don’t do, but we can provide them with a shoulder to cry on or share some wise words when the need arises. If someone you know and love is going through an unpredictable, turbulent period, it’s our responsibility to ask them what they need from us, rather than shun them from our life. It’s the solidarity that’s going to strengthen the love — just as it did for Miley and Tish.