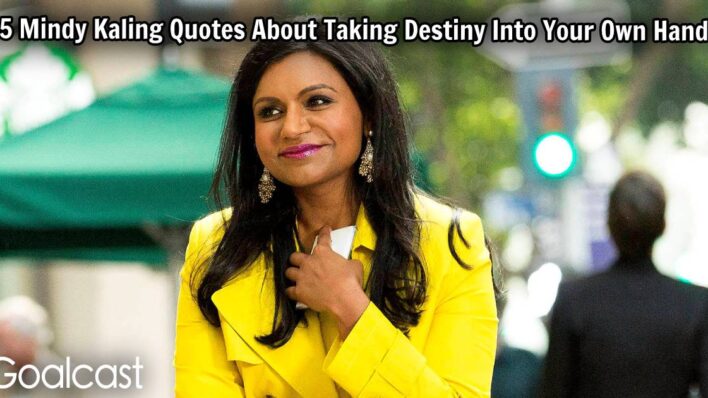 25 Mindy Kaling Quotes About Taking Destiny Into Your Own Hands

Mindy Kaling is a funny and talented actress, writer and producer. Here are 25 Mindy Kaling quotes about taking destiny into your own hands.
By Flavia Medrut    June 2, 2020

Mindy Kaling is a funny and talented actress, writer and producer. Here are 25 Mindy Kaling quotes about taking destiny into your own hands.

Most people know Mindy Kaling from her iconic roles as Kelly Kapoor on The Office and her leading role on The Mindy Project, but the actress is also a writer and producer.

As a child, Kaling was completely fascinated by televised sketch comedies. After graduation, Mindy and her roommate have turned a running joke into a satire about Matt Damon and Ben Affleck. The play in which the two women portrayed the famous actors had a successful two-year run Off-Broadway and was also awarded.

Kaling was the first female writer on the staff when she initially joined The Office team. The talented actress was later promoted to executive producer and received a Primetime Emmy nomination for outstanding writing in a comedy series.

When she’s not on the movie-set, Kaling keeps herself busy writing relatable and funny memoirs. So far, she’s published two New York Times best-selling books — Is Everyone Hanging Out Without Me? (And Other Concerns) and Why Not Me?

Here are 25 Mindy Kaling quotes about taking destiny into your own hands:

If you don’t see a clear path for what you want, sometimes you have to make it yourself.

Write your own part. It is the only way I’ve gotten anywhere. It’s much harder work, but sometimes you have to take destiny into your own hands. It forces you to think about what your strengths really are, and once you find them, you can showcase them, and no one can stop you.

I will leave you with one last piece of advice, which is: If you’ve got it, flaunt it. And if you don’t got it? Flaunt it. ’Cause what are we even doing here if we’re not flaunting it?

Sometimes you just have to put on lip gloss and pretend to be psyched.

People talk about confidence without ever bringing up hard work. That’s a mistake […] I don’t understand how you could have self-confidence if you don’t do the work…

Work hard, know your s**t, show your s**t, and then feel entitled. Listen to no one except the two smartest and kindest adults you know, and that doesn’t always mean your parents. If you do that, you will be fine.

No matter how good you have it, it’s cool to want more.

And the scary thing I have noticed is that some people really feel uncomfortable around women who don’t hate themselves. So that’s why you need to be a little bit brave.

I have a thick skin, which comes from being a not-really-skinny, dark-skinned Indian woman. I haven’t fit in every place, and so I’m kind of used to resistance.

I’m constantly in a state of self-improvement, but I don’t beat myself up over it.

I sort of refuse to be an outsider, even though I know that I very much look like one to a lot of people, and I refuse to view myself in such terms.

Don’t fall into the trap of thinking about politics in your workplace too much. Just work hard, be cheerful, ignore distractions.

What I’ve noticed is that almost no one who was a big star in high school is also a big star later in life. For us overlooked kids, it’s so wonderfully fair.

Who is the beauty icon that inspires you the most? Is it Sophia Loren? Audrey Hepburn? Halle Berry? Mine is Nosferatu, because that vampire taught me my number-one and number-two favorite beauty tricks of all time: avoid the sun at all costs and always try to appear shrouded in shadows.

I have a personality defect where I sort of refuse to see myself as an underdog… It’s because of my parents. They raised me with the entitlement of a tall, blond, white man.

As I got older, I got craftier and less obvious, but I’ve always put a lot of energy and effort into people liking me. That’s why I’ve never understood the compliment ‘effortless.’ What’s so wrong with effort, anyway? It means you care.

In my mind, the sexiest thing in the world is the feeling that you’re wanted.

There is no sunrise so beautiful that it is worth waking me up to see it.

I just have my characters say my controversial opinions and then hide behind them.

The best kind of laughter is laughter born of a shared memory.

When smart people are nice, it’s always terrifying, because I know they’re taking in everything and thinking all kinds of smart and potentially judgmental things.

The truth is, it’s hard to get people to like you, but it’s even harder to keep people liking you.

Maybe the point is that any marriage is work, but you may as well pick work that you like.