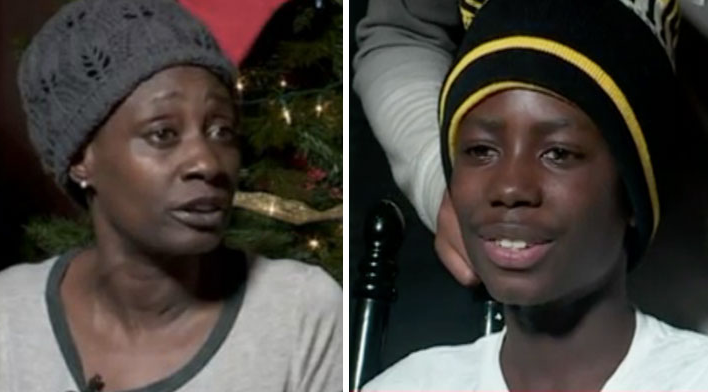 “I was afraid he was going to get in trouble,” said his sister.

It’s all snowy outside. With the temperature changes, the holiday feeling has also set in all around us, in the stores, at schools, and in homes.

People are unpacking their Christmas decor, purchasing gifts for their loved ones, wrapping them up with pretty colored paper, looking up recipes for family dinners, and many more.

Diauris Reed, a 13-year-old even got into trouble pursuing this Christmas spirit for his family.

The Missing Case & The Police Chase

Sophia Reed, with her two kids, son Diauris and daughter Deneisha moved to Oklahoma City using up all their money. They even spent their Christmas money to settle in an apartment. With the little money they had, they knew they couldn’t afford gifts for Christmas.

“What little Christmas money we had…we pay the security deposit for here,” Reed said. Her only wish for the holiday was to be together as a family under one roof. Little did she know that her son would go missing right before this holiday.

13-year-old Diauris Johnson, left home one morning and didn’t return. Except for his siblings, his mom had no clue where he had been. It was very unlikely for the kids to behave in such a manner, and that worried their mom. She was concerned and panicked, so she called the local police to help find her missing son.

RELATED: Police Officer Sees Young Boy Selling Lemonade to Afford Sneakers- He Steps in and Does Something Totally Unexpected.

“He was gone for a while,” said Sophia, after she reported a missing person to the police. The police attended to this request soon and started searching the neighborhood. They found Diauris collecting cans to raise money for a Christmas present for his mother.

“I just wanted to do something for my mama,” Diauris, the 13-year-old man on a Christmas mission said. He was sent home by Officer Roland Russell. However, it didn’t end there.

Police Take Matters Into Their Hands

The boy’s enthusiasm and the kids’ noble intention for their mother moved Officer Roland Russell. He soon spread the word around and his police buddies chip in too.

“I was afraid he was going to get in trouble,” said Sophia’s daughter, Deneisha. “I just didn’t want to say anything because it would blow the whole thing,” she said in an interview with Oklahoma News4. For the next following days, the Reed family had so many police officers knocking on their door.

“There were so many knocks on my door, everybody just was knocking, and every time I opened my door it was the police,” said Sophia. A big group of police officers showed up at their house with presents wrapped in cute Christmas paper. They even managed to raise $800 for the family, to help them celebrate their cozy holiday.

This act of kindness from their kids, spreading to the community through the police, overwhelmed Sophia. It also helped Diauris witness the welcoming nature of the police in the area. “Most of the time when I see the police it’s like, bad stuff. Up here I guess it’s changed, good,” he said.

The family is very grateful for this kind act, however, they want to work hard for the coming year so that they can pay the kindness forward.

Young Struggling Mother Can’t Afford Christmas Gifts for Her Kids – Then, a Concerned News Team Show Up at Her House

Sruthi Matta is a writer, journalist, radio show host, and novice photographer from Hyderabad, India. She works hard and takes pride in learning new things to achieve various skills. When she is not working rigorously, she likes to try new food, dances to her favorite songs, and binge-watches new movies.