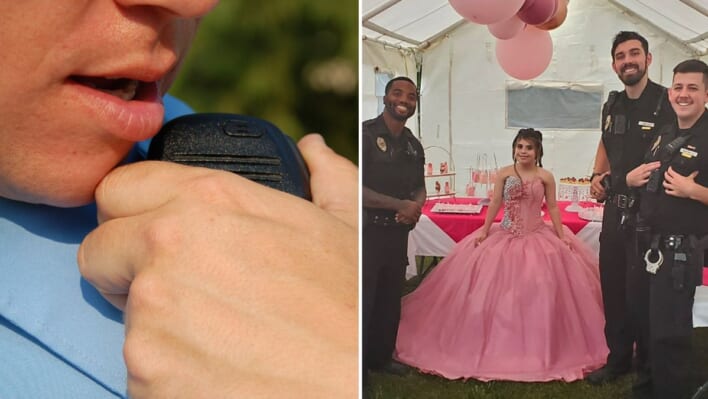 These three officers are literally the party police.
By Ty Jay    November 1, 2022

These three officers are literally the party police.

Let’s be honest, if police officers get called to a party, chances are pretty high that it’ll be shut down. But, if the cops are part of the Greensboro Police Department, they’ll probably stay to celebrate.

That was the case for Greensboro Police Department officers Matthews, King, and Johnson who did their due diligence by checking a house party after receiving a noise complaint.

Instead of shutting it down for no reason, however, the three officers surveyed the situation and realized attending the party was more important.

After getting the noise complaint, Matthews, King, and Johnson realized that the birthday party was a quinceañera — a celebration of a girl’s 15th birthday.

After showing up to the special bash, the three officers were invited by the host family to eat and drink, which the three cops happily accepted.

RELATED: Concerned Family Call Police on Elderly Man Who Wants to Drive Across America – The Cop Who Arrives Has Different Plans

According to a Facebook post from North Carolina’s Greensboro Police Department, upon arrival, the three officers stayed for food and refreshments and handed out GPD stickers to the little ones and posed for pictures. “We hope this young lady had a very happy birthday,” said the police department.

Pictures from the event — which were shared by the police squad — show that rice, beans, and tacos were part of the birthday party’s menu — impossible to turn down, even while in uniform.

From the pictures, it’s easy to see that the policing trio were actually enjoying their time.

The Facebook post received resoundingly positive comments from other members of the Greensboro community, applauding both the party hosts and the officers were inviting the authorities and for the police to accept.

“Equal credit to the officers for accepting and demonstrating what building relationships is about,” reads one comment.

Others called the situation an “excellent example” that police serve to protect the community “without exceptions.”

“Thank you to those officers who participated and celebrated with the 15-year-old-girl,” said another Facebook user.

Other community members were quick to comment on Latin American eating habits: “I know those parent made y’all sit and eat before leaving… You do not tell a Mexican family ‘no’ to food at a celebration.”

Keep that in mind for next time party planners, just because the police are called doesn’t necessarily mean it’s a bad thing — just make sure you have plenty of tacos and smiles to go around.