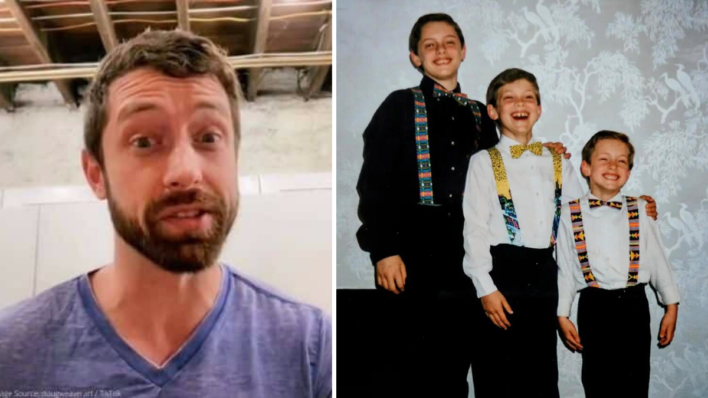 Clever Mom Created This Class to Teach Her Sons Respect – Now, One of Them Is Sharing His Experience

One mother used a genius method to teach her sons about respect and consent, and it’s something every parent needs to know.
By Bryan Liquor    July 2, 2022

One mother used a genius method to teach her sons about respect and consent, and it’s something every parent needs to know.

It’s a statistic that never ceases to amaze. Half of all marriages end in divorce. The question remains: How do you go from a lifetime vow to an early exit?

According to marriage.com, some main causes are lack of communication, arguing, and lack of intimacy (both physical and emotional).

One wise mom knew all of these pitfalls, and how she chose to help her children avoid them is like nothing you’ve ever seen before.

How One Mother Taught Her Sons to Be Great Husbands

In a TikTok post, artist Doug Weaver shared how his mother Mickey created a ‘Husbands in Training’ for him and his two older brothers when they were just kids to help them be great husbands when they got married.

One of the key topics was — you guessed it — conflict and communication.

“There were things like, ‘What to do if your spouse says something and the information they give is wrong,'” he said. “How to handle it if they say something wrong in public versus in private, when it is appropriate to correct them and when it isn’t.”

RELATED: New Mom Is Terrified about Having Another Miscarriage – Her Husband Steps in with a ‘Corny’ Save

Weaver said that his mom also taught him and his brothers consent.

We talked about consent, we talked about the basics of respecting and honoring women and listening to women, and all of the things that really just make you a decent human being.

Other topics covered included eating etiquette and chivalry. He shared that when his father caught wind of it, he too ‘enrolled’ in Professor Mickey’s course.

To top it all off, his mother even made certificates that she signed and gave to the boys on their wedding day.

How One Mother’s Course Sparked a Movement on TikTok

Weaver’s video went viral, with over 5 million views, a million likes and 50,000 comments.

“Is your mother a goddess?” asked one.

Another said that successfully turning boys into men is not easy in this day and age.

RELATED: Pregnant Woman Goes Into Labor In Uber On The Way To The Hospital – Driver Has A Surprising Response

“So freaking cool! Glad your dad was self-aware enough to realize he needed it, too! This whole thing just makes me happy,” added another.

It’s such a huge responsibility to raise a boy because their ability to do good or damage is amplified due to their status in society.

The response was motivation for Weaver to create his own ‘Husbands in Training’ venture to reach the masses. He created a GoFundMe to raise money for equipment, writing “the TT community really wants my mom to produce content about raising boys to be good men.”

He raised $9,745, crushing his humble goal of $340. You can subscribe to Weaver’s marriage MasterClass here.

How One Mom Proved That Being a Good Husband Takes Work

Weaver says that he hopes to pass down his mother’s lessons to his own son.

I’m definitely raising my son to understand how consent works and that the necessity for consent doesn’t end when you get married, that things still need to be consensual.

We often get caught up in what we want to achieve: A nice car, a great job, and loving spouse. Yet, it’s the person you become, not the things you want, that determines success in life.

That’s one lesson you won’t always learn at school.