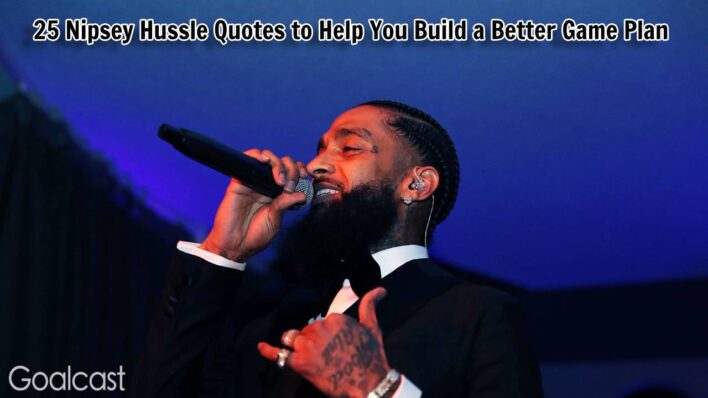 Nipsey Hussle was an American rapper and community activist. Here are 25 Nipsey Hussle quotes to help you build a better game plan this time around.
By Flavia Medrut    February 20, 2020

Nipsey Hussle was an American rapper and community activist. Here are 25 Nipsey Hussle quotes to help you build a better game plan this time around.

Hussle grew up in a poverty-stricken gang environment in Crenshaw, Los Angeles. It wasn’t long until he joined the the gang life and got arrested for committing a few petty crimes.

When Nipsey was 19 years old, his father took both him and his brother on a three month trip to East Africa. Impressed and inspired by this experience, Hussle decided to radically change his life. He began to focus on his music career and community activism.

The two went hand in hand, as it was through music that Nipsey inspired change in the lives of most of his fans. His community grew along with his success — he funded improvements to neighborhood schools and held constructive speeches to prevent gang violence.

Sadly, just before completing a project that would’ve involved officials from the LAPD, Nipsey was murdered in front of his The Marathon clothing store. The musician died at age 33 from multiple gunshot wounds, but his music is still out there to inspire us all to pursue our goals.

Here are 30 Nipsey Hussle quotes to help you build a better game plan this time around:

Without a game plan and without a strong sense of faith in what you’re doing, it’s gonna be really hard to accomplish anything.

Most important thing is to get rid of doubt. If you got doubt in what you’re doing it’s not gonna work.

I just believe in ownership… I believe in investing in yourself…Your foundation should be strong.

Thought is powerful in all phases. Even in my career, even in my life, things end up exactly how I visualized them.

I believe that we should own the fruits of our labor and the assets of our creations.

The company you keep has a large influence on the situations you bring to yourself. Birds of a feather flock together.

I’m about seeing long-term, seeing a vision, understanding nothing really worthwhile happens overnight, and just sticking to your script long enough to make something real happen.

Sometimes you have to take two steps back to take ten forward.

Luck is just bein’ prepared at all times, so when the door opens you’re ready.

Instead of trying to build a brick wall, lay a brick every day. Eventually, you’ll look up and you’ll have a brick wall.

My thing is that I don’t give no person that much power over my path that I’m walking. Not one person can make or break what I’m doing, except me or God.

You gotta have a sense of humor to know that the bullshit is gonna happen, you can’t be too serious about it or too emotional and fake when the bullshit happens.

On a mission, your worst enemy is idle time.

We got turned down, we failed, had setbacks, had to start over a lot of times. But we kept going at it. In anybody’s case, that’s always the distinguishing factor.

If you’ve got a plan, it’s not just like a pipe dream. You have a step-by-step list of things to do to get to your goal.

Be a man of your word, do what you say you’re gonna do, respect people the way you would like to be respected.

See, the best teacher in life is your own experience/ None of us know who we are until we fail/ They say every man is defined by his reaction to any given situation/ Well who would you want to define you?/ Someone else or yourself?

Success to me is just being able to do what you love to do and support yourself all through.

I’m more focused on giving solutions and inspiration more than anything.

Most the time, when it rains it starts pouring, but how we grind it makes the weather change for us.

I always had faith in my creative capacity.

That’s the best currency you can offer: inspiration. So, when a person can rely on you for that, that empowers them in every realm of their life.

Be more fearless. All my radical moonshots have defined me. That don’t be my downfall, my downfall will be not going crazy, not having a higher expectation.

I look at it like the game gonna test you. Everything gonna test you if it’s worthwhile and you gonna make decisions based on what you care about more.

Define who you are and what you are, and be clear on that. Meditate on that and then, live and die by that… You can’t break the rules, the fundamental rules.

We don’t want to wait on someone to hire us and give us a check. We want to create our own opportunities.

Try to have more faith and less fear, try to express it to your peers, I’m talking about dreams. Better to do it and let it be seen, cause then it’s so clear.

I feel that luck is a product of hard work.

Hope opportunity don’t knock when opportunists in your group.