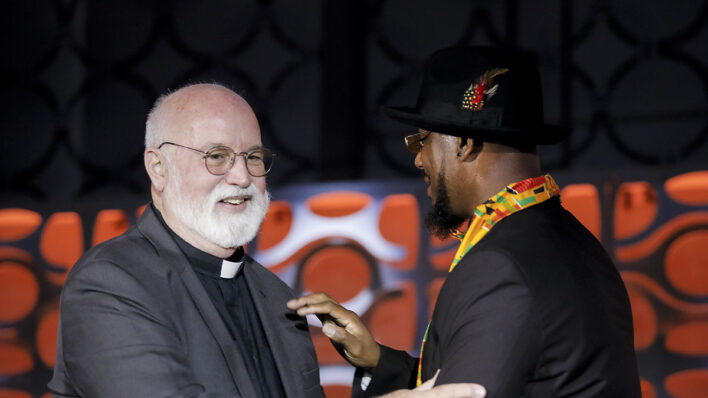 When it comes to transforming the life of a former gang member, Father Gregory believes that compassion is the first step to take.
By Flavia Medrut    November 6, 2019

When it comes to transforming the life of a former gang member, Father Gregory believes that compassion is the first step to take.

Father Gregory Boyle doesn’t play by the rules. It is said that every society needs a set of laws in order to function. As humans we can be as kind or as bad as we can imagine — it’s a choice we make depending on circumstances, environment and personal judgement.

So we might say that the law is a means of either protecting us or refrain us from harming others. We learn to respect it due to our own sense of morality or simply because we fear the consequences. Whatever the situation might be, some people are raised in communities where breaking the law seems like the only way to live.

But what happens to those willing to change?

Father Gregory’s work with ex-cons is the answer

Usually, once people get out of prison, they face an environment that actively deters them from becoming productive members of society. Friends and even families might reject them, they are unable to find a job because most employers are at least skeptical about hiring them, and they are one of the most stigmatized groups in society

In a world where an ex-prisoner has always struggled to successfully reintegrate into society, Father Gregory Boyle (known to those he helps as “Pops”) has chosen to show kindness and help those who are looking for a new beginning.

He takes a new approach

Father Gregory is a priest who has devoted 30 years of his life understanding and helping gang members to realize that there is always a better way of living their lives. It’s a service that benefits both public safety and those left behind without hope

Here is what we seek: a compassion that can stand in awe at what the poor have to carry rather than stand in judgment at how they carry it.

In the late 1980s, Boyle saw with his own eyes the damage that gang violence can produce. He was serving as the pastor of Dolores Mission in Los Angeles during the so-called “decade of death.”

Instead of becoming terrified or look the other way, he decided that these individuals need a second chance, a different approach to help them live normal lives; they need to not be thrown away by society, otherwise they are set up to fail once they are released.

What is Homeboy Industries?

Since 1988, Father Boyle began to have a contribution in improving the lives of former gang members in East Los Angeles, and in 1992, he founded Homeboy Industries. It is now the largest gang intervention, rehabilitation, and re-entry program in the world.

Homeboy Industries is a place where former gang members and ex-prisoners can find a job and a new purpose in life. Here, they learn how to leave behind past mistakes, learn from them, start fresh and look forward to a crime-free future.

Boyle’s approach proved itself to be quite successful — thousands of men and women that joined Homeboy Industries have overcome addiction and turned their lives around.

Due to Boyle’s work, only 30% return to prison, compared to 70% nationwide, just three years after they’re released.

Homeboy Industries is Father Greg’s church. People go to church in need of help, healing and redemption, and that’s exactly what beneficiaries seek when joining this non-profit organization. The group includes everyone, “and no one is left outside.”

Ever since it was founded, the word spread fast and more and more former gang members were looking to clean up their lives, but Boyle couldn’t find enough jobs for everyone. The organization gets only 2% of its funding from the government so things weren’t easy at all.

They began by opening their own Homeboy Bakery, then Homeboy Tortillas, then Homeboy Diner (where you can get food for less), Homegirl Café and implemented a solar panels installation training program. All of these meant more work places for those with criminal records.

But the institution is not limited to only offering jobs. It also provides services that help individuals in their rehabilitation process:  anger management, parenting, mental health programs, case management, and even tattoo removal.

Why does Boyle do it?

Boyle was often accused of protecting criminals, but according to him, the wrong idea has taken root in the world. When others think some lives matter most than others, Father Boyle believes in boundless compassion and second chances.

Compassion isn’t just about feeling the pain of others; it’s about bringing them in toward yourself.

Damage prevention instead of damage control

Sure, there is no doubt the impact gangs have on society is real and their members don’t really care about consequences, whether it’s death or prison. They’ve been taught no other way. Boyle is convinced that we can reduce the problem by helping those who join gangs, rather than stamping out the damage they produce.

The outcomes of Boyle’s work are there for everyone to see, and for his efforts he has received numerous honorary degrees, awards and recognitions including the Civic Medal of Honor, the California Peace Prize, Humanitarian of the Year from Bon Appetit Magazine, and in 2011 was inducted into the California Hall of Fame.

They have so many stories to tell

First of all, Father Boyle insists on the fact that no person is less than another, no matter what they might have done at a certain point in their lives.

Since Homeboy Industries welcomes thousands of people every year, Pops is always proud to tell stories about those who managed to transform their lives forever.

It’s now wonder. His program did more than society was able to, reducing recidivism, substance abuse, and reconnecting individuals with the community.

Father Boyle tells stories that can shake our notion of who we are, or who the other guys are. His voice is tender, and his message powerful:

If there is a fundamental challenge within these stories, it is simply to change our lurking suspicion that some lives matter less than other lives.

From misdemeanors to individuals who committed serious crimes, Boyle says that he has never seen someone who is pure evil. He strongly believes that there is good in the hearts of everyone, and if you show kindness, people will eventually respond the same way.

Every story he tells is filled with comedic and emotional anecdotes about former gang members that have reached his doorstep. Not all of them have a happy ending, but they sure are something worth listening to.

His ability to captivate attention with both funny and tragic stories experienced by the “homies,” was rewarded when his two books Tattoos on the Heart: The Power of Boundless Compassion and Barking to the Choir: The Power of Radical Kinship became best-sellers.

He will always be there for his “homies”

Boyle works with those who have been left behind without hope, and sometimes their healing and re-entry can take years. There might be detours in the process, but the priest will not give up on anyone who wants to clean up their lives.

He believes in second chances and that people are capable of change once they’re well equipped.

You stand with the least likely to succeed until success is succeeded by something more valuable: kinship. You stand with the belligerent, the surly, and the badly behaved until bad behavior is recognized for the language it is: the vocabulary of the deeply wounded and of those whose burdens are more than they can bear

Every life transformation Boyle has witnessed has deeply impacted communities, not only in the city of Los Angeles, but all over the world.

Father Boyle’s words and actions teach us that showing compassion, reveals compassion in others, while punishment and stigma might do the opposite.