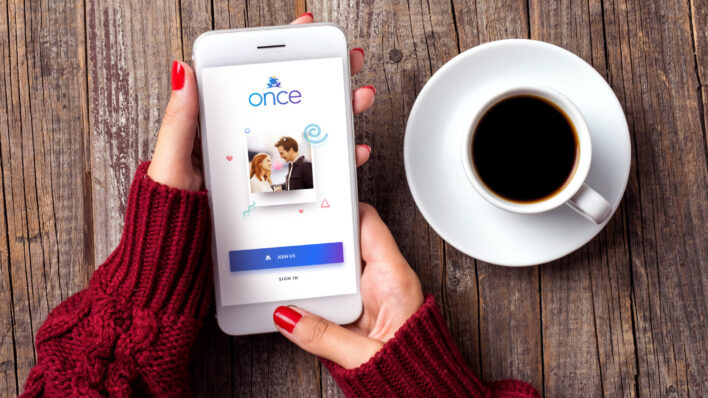 Are you looking for a deep, meaningful romantic relationship? Are you sick of endless swiping and empty hookups? You’re not
By Anouare Abdou    February 27, 2018

Are you looking for a deep, meaningful romantic relationship? Are you sick of endless swiping and empty hookups? You’re not

Are you looking for a deep, meaningful romantic relationship? Are you sick of endless swiping and empty hookups? You’re not alone.

According to a survey led by dating app Once, 40% of dating app users are experiencing “swipe fatigue” because mainstream apps are “superficial, geared towards casual relationships and don’t have adequate safety features.”

Once is a “slow-dating” platform for singles seeking more depth, and it just launched in the U.S., disrupting the likes of Tinder and Bumble with unique features that aim to combat catfishing, favor authentic connections and prioritize the safety of women.

So what exactly does slow dating entail? Once is named after the fact that once you match with someone — the AI-driven algorithm selects a high-quality match tailored to your preferences every day at noon — you’re only able to talk to that one person for the next 24 hours. Quite a big deterrent for people looking for spontaneous 3 a.m. hookups. “I am a true believer in technology helping you gain time, and making you more efficient with your life,” said CEO and co-founder Jean Meyer. “And the slow-dating movement starts from there.” According to him, one of the biggest problems of the dating industry is that dating is considered a volume game, and users are expected to swipe through hundreds of potential suitors in the hopes of meeting one decent person — let alone the partner of their dreams.

RELATED: What to Do When You’re in a Toxic Relationship

And speaking of decent matches, any woman who has ever been on a dating app has most likely received unwarranted, inappropriate messages from men, or, even worse, experienced scary behavior on a date.

On Once, women are able to rate their dates in the same way that they would give a rating to their Uber driver or AirBnb host. And both women and men can give each other ratings based on whether their date’s profile matched the person in real life, which helps avoid catfishing and encourage authenticity.

Rating people sounds awfully like an episode of Black Mirror, but, according to Meyer, the users have been very receptive to the concept and are not abusing the feature, which is meant to weed out dangerous behavior and highlight men’s positive personality traits — not gratuitously give negative feedback based on subjective criteria.

“If you’re a nice guy and there was no chemistry, the woman [is unlikely] to give you a one-star rating,” he said.

“Be honest and be genuine, and you will be part of the many e-mails that we receive every day from people thanking us for helping them find love.”