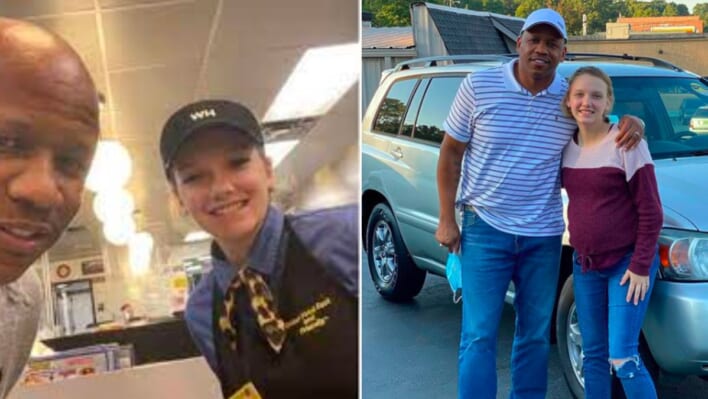 A kind-hearted pastor from Georgia left a struggling waitress with a $40 tip that eventually turned into a life-changing amount of money.
By Ty Jay    November 6, 2022

A kind-hearted pastor from Georgia left a struggling waitress with a $40 tip that eventually turned into a life-changing amount of money.

A good-natured Georgian pastor surprised a pregnant waitress with a life-changing tip for a heartwarming reason.

Bishop Eusebio Phelps visited a Georgia Waffle House for the classic All-Star breakfast and was touched by the kindness he received from his waitress, Hannah Hill.

See folks? You never know where simply being kind might get you.

How One Selfless Act of Kindness Resulted in $12,000 to a Struggling, Pregnant Waitress

While speaking with Hanna, Bishop Eusebio learned that the young woman wasn’t only living out of her car, but she was also pregnant.

The pastor became even more intrigued by the young waitress when he found out she was naming her unborn child Samuel — the same name as Bishop Eusebio’s late son, who had past away seven years earlier.

After the Waffle House meal, Bishop Eusebio tipped her $40 on a small bill.

But what happened after was what would change Hannah’s life.

Bishop Eusebio says he went home, recounted the story to his wife and declared, “I want to raise a thousand dollars to give to Hannah so she can buy whatever she needs for the baby,” he told reporters.

“She was just so kind and she was so pleasant. She was a sweetheart and that just touched my heart,” said Phelps on Facebook, who leads New Faith Christian Church in Stockbridge. Following their interaction at the restaurant, the pastor sent out a post on Facebook asking others to donate to help out the soon-to-be mother.

Donations started coming in from various people across the social media network.

More than $10,000 was raised for the pregnant waitress.

“Well with the help of our entire Church family New Faith Christian Church and all the communities of social media and word of mouth $12,000 was raised and given to Hannah,” announced the church.

A Life Changing Surprise at Work

Unaware of the donations, Hannah went to work at Waffle House one shift and was greeted by customers and a cheque for almost $12,000.

“Life had just thrown me a curve ball, you know, it’s tough being a young mom. Lately, I have been praying just because I’ve been really stressed lately,” says Hannah, about her winnings. “I’m like, dang I want a place to live before this baby gets here.”

Besides the donations, the New Faith Christian Church also gifted Hannah free child care for a year at a local daycare and learning center.