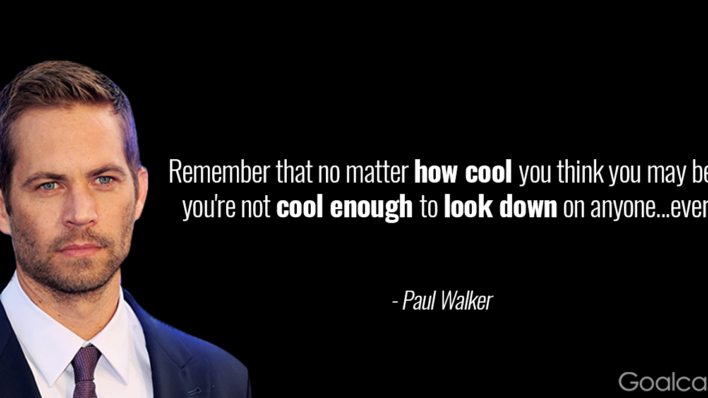 15 Touching Paul Walker Quotes to Help You Win at Life

Paul Walker began his TV career while he was still a toddler, but gained international fame after portraying Brian O’Conner
By Flavia Medrut    August 14, 2018

Paul Walker began his TV career while he was still a toddler, but gained international fame after portraying Brian O’Conner in the blockbuster hit The Fast and the Furious. Walker had a genuine interest in marine biology after finishing high-school, but because he loved acting more than anything, he decided to make a full-time career out of it.

Paul did, however, have the chance to star in a National Geographic Channel series called Expedition Great White, therefore fulfilling a lifelong dream.

Besides being a great actor, Walker carried out charitable acts. He founded the organization Reach Out Worldwide, which helped people in areas affected by natural calamities.

He tragically died in 2013 in a car accident after attending a charity event he hosted for the victims of Typhoon Haiyan in the Philippines.

Paul Walker always encouraged his fans to do whatever they love and he remains an inspiration for every car enthusiast.

Here are 15 Paul Walker quotes to help you stay humble and win at life.

Remember that no matter how cool you think you may be, you’re not cool enough to look down on anyone…ever.

My philosophy is: If you can’t have fun, there’s no sense in doing it.

I like a woman that’s capable and at the same time feminine. I admire tomboy qualities but with a feminine touch.

There’s a time and place for everything, but as I get older, I like finding those human moments and really connecting. I’m one of those people that think certain things happen at certain times for all the right reasons.

I learned a long time ago that if you subscribe and believe the good, you have to believe the bad. My measure is my heart and what I know.

The dream is to have it all. Who says you can’t have your cake and eat it too? Live this life, that life, this life, you know? You only live one time — I want to get it all in. You know, all that really matters is that the people you love are happy and healthy. Everything else is just sprinkles on the sundae.

I’m not the kind of guy who’s taking advantage of my position.

It’s not about working anymore, it’s about doing work I can be proud of.

I don’t care what it is in life: listen to your heart. If you do, no matter what, you win.

Sometimes you feel guilty for your success because you know people who deserve it way more.

I look at people in certain circumstances, and I fall into caretaker mode real quick, real easy. I like to shoulder people up and carry them along, and then I end up creating some kind of dependency. I enable. It’s really, really hard for me.

If one day the speed kills me don’t be sad because i will have died smiling.