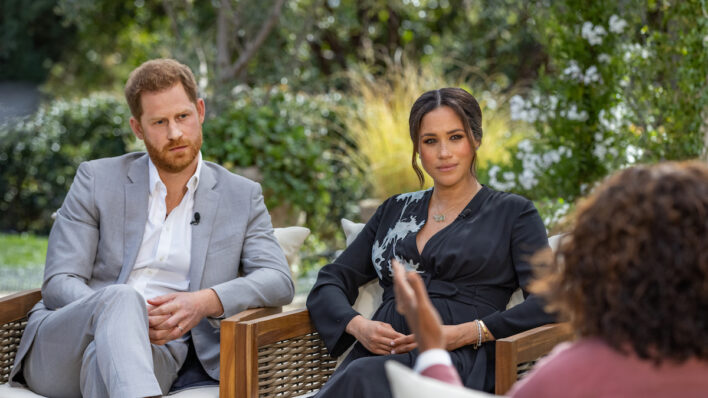 Harry and Meghan have been the focus of a unique brand of rebellion-inspired fascination—But here’s why I don’t believe in it.
By Maya Khamala    March 8, 2021

Harry and Meghan have been the focus of a unique brand of rebellion-inspired fascination—But here’s why I don’t believe in it.

Yesterday, less than a month after Prince Harry and Meghan Markle (still known as the Duke and Duchess of Sussex) confirmed they wouldn’t be returning to their royal duties, the couple sat down with Oprah to talk about their experience in the British Royal family, what led them to leave, and why they’ve decided to stay gone.

The long-anticipated interview, billed as a tell-all for a couple now living outside the confines of the British Monarchy, aired after weeks of intensive media hype.

But seriously, why all the hype?

“Is anyone selling big foam fingers that say MEGHAN and HARRY on them for Sunday?” tweeted one follower. “Meghan and Harry here to take back everything stolen from Diana,” wrote another.

In wondering why so many people care so much about what Harry and Meghan have to say, one need only look to the events themselves.

First and foremost, there’s the fact that from the very beginning, Meghan’s unprecedented entry into the British Royal Family was met with countless tensions—both spoken and unspoken. Meghan was an outlier in that she’s American, a celebrity, and, most importantly, black—something the Royals had never seen within their own ranks before.

But, in May 2019, when Harry and Meghan welcomed their son Archie, it seemed their status as Royals was thick as blood—official as official can be.

Fast forward to in January 2020. Following widespread rumors of a rift within the royal family, Meghan and Harry returned from a vacation in Canada and announced that they were ‘stepping back’ from their role as senior members of the family, and that they intended to balance their time between the UK and North America.

Their decision caused an uproar. Upon hearing this shocking news, the Palace released their own statement confirming that the Duke and Duchess were to become financially independent and cease to represent the Queen.

“It brings me great sadness that it has come to this,” Harry said. “The decision that I have made for my wife and I to step back is not one I made lightly. It was so many months of talks after so many years of challenges.”

Since then, the couple has been the focus of a unique brand of rebellion-inspired fascination— which only fed the big interview hype.

Are we even surprised?

In their time as royals, Meghan and Harry were the target of hateful, false, and unrelenting tabloid media. In 2020, after the couple threatened legal action, they received an apology from a photo agency after they’d used a drone to take pictures of one-year-old Archie.

This, of course, was but one of many such brazen invasions of privacy. The British tabloids have always loved to pit Meghan Markle and Kate Middleton and against one other, creating a false narrative that the two women were at war.

In her interview with Oprah, Meghan finally spoke out about the false tabloid story which insisted that she had made Kate cry before her royal wedding. “No, no, the reverse happened,” she said, telling how she was the one left in tears. “And I don’t say that to be disparaging to anyone, because…she apologized…she did what I would do if I knew that I hurt someone.”

If the tabloid attacks on Meghan weren’t transparent enough, just days before their interview, The Times of London published a report accusing Meghan of having bullied her staff. Markle responded by saying she was “saddened by this latest attack on her character,” particularly as someone who has been targeted by racist social-media posts since she came out as Harry’s girlfriend in 2016.

Big reveals, all the feels

Fact: although the couple’s super-hyped interview with Oprah dished a few big reveals, none of it was out of line with what the world already knew of Harry and Meghan’s experiences with the royal family.

Meghan talked about how royal life took a toll on her mental health, leading her to have suicidal thoughts—but when she asked for help, she was denied, based on the fact that she wasn’t a paid employee of the family. Ahem.

Then, you have the fact that while Meghan was pregnant with Archie, the family decided he would not be given a formal title within the Royal Family and would not receive personal security, leaving Meghan afraid she would not be able to keep her son safe. But perhaps the most scandalous reveal of the entire interview was that while Meghan was pregnant, the family expressed their concerns numerous times to Harry about his unborn son’s skin colour and what it would mean for the family.

The interview laid down a host of other bombshells for fans and foes alike to pick apart, analyze, take issue with, or relate to, as the case may be.

Perhaps most poignantly, Harry invoked the memory of his late mother, Princess Diana, who had to find her way alone after her divorce from Harry’s father, Prince Charles, in 1992. Diana became estranged from her ex’s family, ultimately becoming the first royal to give a tell-all interview in 1995.

She spoke with unprecedented honesty about her life and the pressures she felt from the media at the time. Hauntingly, this was less than two years before her death at age 36. Sadly, the aggressive behaviour of paparazzi are widely blamed for her fatal crash. One thing remains certain: Harry and Meghan have drawn inspiration from Diana’s rebellious, independent attitude, and in many ways, their decision to stand up for their freedom has picked up where she left off all those years ago.

Ultimately, the lesson here is this: we should all leave Harry and Megan alone and stop treating them like they’re in a zoo-full of rare species. Whatever the decisions or motives behind any of their big (or small) life decisions happen to be, it’s none of our business.

The couple has come this far largely as a result of their unquenchable desire to break free from the harassment and damaging false narratives conjured up by tabloid media, the royals themselves, and the world at large. Personally I’d say they’ve done us all a favour by shaking things up as they have—the royal family clearly needs some profound shifting of attitudes and priorities, and apparently all it took was for someone they deemed an outsider to find her way inside.

Perhaps the most hopeful of all their reveals is that the couple is expecting a baby girl this summer, and are looking forward to living a (hopefully) peaceful life as a freedom-lovin’ family. “Now we’ve got our family. We’ve got the four of us, our two dogs,” said Harry.

They moved to LA in July, and have signed a multi-year deal with Netflix. “Our focus will be on creating content that informs but also gives hope,” the couple said in a statement.

I applaud their courage, may they live a low-key life of peace.