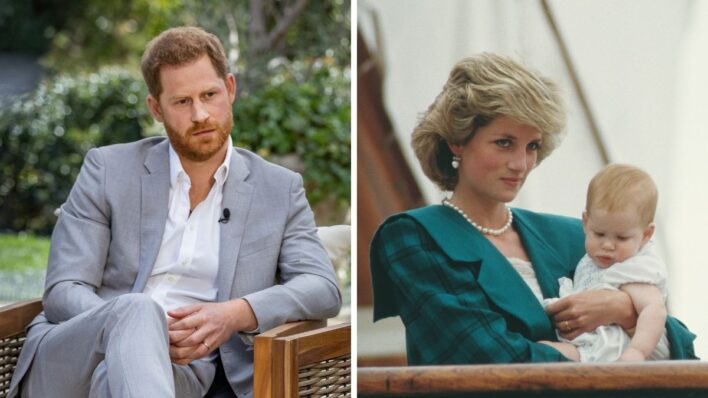 What Prince Harry Revealed About Growing Up In A “Toxic Family”

Prince Harry didn’t hold back from sharing his opinions about his own family and the system under which he was raised.
By Shaoni Das    March 9, 2021

Prince Harry didn’t hold back from sharing his opinions about his own family and the system under which he was raised.

The Duke and Duchess of Sussex quite simply set the Internet alight on a Sunday night.

The world is still recovering from their explosive interview with Oprah Winfrey, which revealed the inner workings of the royal family in a stunning but heartbreaking fashion. It was a long-awaited special that had been hyped for weeks via brief clips teasing scandalous revelations. And it delivered — with bombshells galore.

The interview covered a lot of ground, from Meghan’s suicidal ideation to their experience of racism from both within and outside the palace to the drastic developments that forced their hand. Yet, the most striking element was Harry’s brutally honest account of the whole situation.

Harry didn’t hold back from sharing his opinions about his own family and the system under which he was raised. The narrative that Meghan was the one who orchestrated their departure from the royal family can be put to rest. It was Harry’s decision as a husband and father that drove the couple to pack their bags and move to another country.

His growth as a person over the years is something to behold. It was not without its share of pain and shame, but his sensibilities concerning his wife and child reveal that his story isn’t all that different from millions of others trying to escape a toxic environment.

Oprah touched upon Meghan’s mixed-race identity multiple times over the course of the interview. As the first biracial member of the British royal family, Meghan was subjected to widespread vitriol from certain members of both the press and the public. Racial discrimination in the media is a tough subject to unpack, but both Meghan and Harry agreed that her ethnicity certainly played a role in how she was portrayed in the media and treated by the monarchy.

Harry admitted in the interview that having grown up with immense privilege and limited exposure created gaps in his conscience. He truly didn’t know how unfair the world could be until he pursued a relationship with Meghan and witnessed the hate unfolding in real-time.

Keep in mind that the Prince had been involved in a number of problematic incidents throughout his youth and early twenties. In 2005, the tabloids published photos of him garbed in a full Nazi uniform, complete with the Swastika printed on his sleeve. Harry apologized for the uniform, saying he was “very sorry if [he] caused any offense” to anyone. A few years later, a video emerged in which Harry was allegedly caught calling his platoon member his “P*ki friend” while calling another “raghead.”

This type of behavior is obviously unacceptable, and Harry has taken years to make amends with the people he has hurt. Equality has been at the heart of his activism work for a long time, and he’s done well to rally against hate speech and discrimination when needed.

Yet, it took Meghan’s arrival to truly open his eyes to the realities of racism. He experienced first-hand how racial basis can devastate mental health and cause fissures among his family. He learned about the toll it takes on those who experience it, and therefore he knew what he had to do to get his wife and son away from threatening circumstances.

I’ve spent many years doing the work and doing my own learning. With my upbringing and the system which I was brought up in and to what I’d been exposed, I wasn’t aware of it, to start with […]

Even though Harry had learned from his mistakes and had improved his understanding of social issues, he “wasn’t prepared” at all to tackle Meghan’s terrifying confession. She didn’t “want to be alive anymore” and wanted support from the institution. He said he “went into a dark place” himself upon hearing her words. His primary concern was to be there for her, but he didn’t know of the specific course of action he could take to alleviate her pain.

He said that those conversations are simply not had in the royal family, so he felt internalized pressure against voicing his concerns and seeking assistance from his family.

I guess I was ashamed of admitting it to them. It’s a very trapping environment […] I didn’t have anyone to turn to.

He added the royal family had a certain type of mentality about Meghan’s depression; they said she didn’t deserve help because she was one among many in the family who faced public scrutiny, that everyone had to learn how to bear the pain and move on, so why couldn’t she? It was an unsympathetic and cowardly approach to mental health — one that had driven out Diana twenty-five years ago.

But, ultimately, Harry realized that these mental health struggles weren’t just affecting his wife; they were impacting many people around him, and so he knew that “it wasn’t going to end well.” So he started having conversations with palace staff and members of his family on what the next steps could be.

Harry also accused his family of not backing Meghan, even though they had “many opportunities.” Millions of people sympathized with Meghan and demonstrated their support however they could, yet “no one from his family ever said anything over those three years.”

While the couple was arranging their partial exit from the royal family, Harry faced quite a bit of resistance from the palace regarding the finances associated with the move. As they were stationed in Victoria, Canada, Harry was told that their security team, who were customarily provided by the royal family, would be removed, so they were left high and dry without any security. They ultimately found refuge in Tyler Perry’s house.

When asked if Harry “blindsided the Queen” regarding their announcement, Harry said that he had given advanced notice to his grandmother and other members of his family.

Harry also shared that at one point after leaving England, his family had “literally cut [him] off financially.” While the rest of us must think such a phenomenon is laugh-worthy for a prince, we have to keep in mind that his entire existence is tied to his family. His entire job is representing the royal family, so when he “quits” the job, he loses out on all necessities provided by the monarchy. In a way, he has no money of his own, whereas Meghan had at least built her own wealth as an actress.

That’s why, as he explained, Harry had to find other sources of income for the family. For the first quarter of the year, the only form of wealth to which he and his wife had access was the inheritance that his mother left him.

All royal doors lead to Diana in some way or the other. The Princess of Wales and Harry’s mother, Diana, was the heart and the soul of the royal family — she had had an unsurpassable grasp on the public, unmatched by any celebrity preceding or following her. The paparazzi attention directed at her was so virulent and aggressive that it quite literally played a role in her tragic death. Those who remember her funeral procession will never forget the agony on her sons’ faces and how much pressure they were under to not convey any semblance of grief.

As it turns out, those tragic events impact far more than immediate reactions. They serve as a caution to the subsequent generations, who need to remember the past when putting together their future.

Diana herself had been incredibly critical of the royal family. She had gone on the record to detail how her husband’s family had exacerbated her mental health struggles, including her self-harming compulsions and bulimia, by remaining silent on the whole matter and offering no support whatsoever. Anyone familiar with Diana’s story can draw a straight corollary to what Meghan has been going through.

The only difference is that Meghan and Harry acted before things escalated, as they had with Diana. Harry recognized the warning signs and undertook a course of action that would prevent the past from repeating.

My biggest concern was history repeating itself—I’ve said that before on numerous occasions, very publicly […] I think [my mum] saw it coming. I certainly felt her presence throughout this whole process.

Diana’s ghost hovers over the entire ordeal. In fact, the independent life that Harry and Meghan are building by themselves outside of the influence of the royal family is not dissimilar to the one Diana was just starting to establish before she tragically passed away.

She, too, desired to carve out her own unique place within the world that operated outside of royal pressures. She was passionate about her philanthropy and was keen on shining a light on taboo subjects that the family found inappropriate. It’s ironic, or perhaps by design that Diana’s money would be there to help Harry in his darkest time. It’s almost as if she foresaw the obstacles he would encounter as an adult and therefore would need some assistance when the moment came.

The past will always find a way to teach you lessons

The whole state of affairs with Harry, Meghan, and the “institution” is frankly too complex to examine in one go. It might take months, if not years, to understand the gravity of the couple’s revealing interview with Oprah. It’s not for us to determine whether or not this was the appropriate thing to do, but clearly, something had to give. Meghan has been the target of incendiary media attacks for well over four years, and she could only go so far without finding a way to speak her mind. Harry has been nothing but the compassionate husband — he has had to deal with his own share of complications from within the palace. His father all but disappeared from his life, whereas his family cut him off without any explanation.

But Harry knew that he had to muster the strength to help his wife and step out of the family. He’s seen what could happen if a woman doesn’t have the necessary support structure to carry her through her toughest moments. The past is a living, waking reminder of how bad the situation could get. The past will continue teaching us vital lessons about life, whether we like it or not. The only thing left to do is learn from the mistakes and move with confidence and strength.