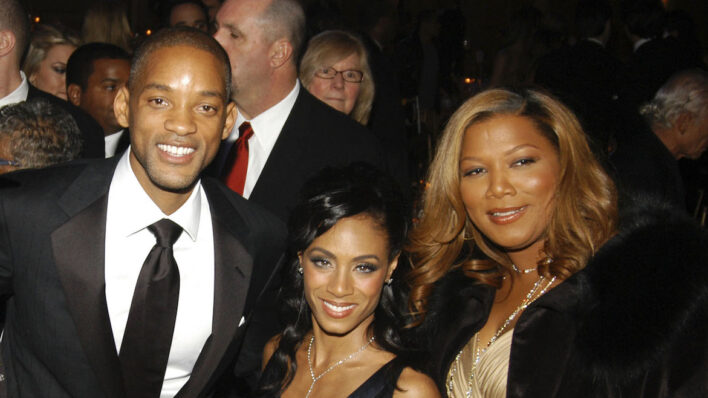 Before Queen Latifah achieved the success and level of influence she has today, she was given a chance by no other than Will Smith and his wife.
By Maya Khamala    June 23, 2020

Before Queen Latifah achieved the success and level of influence she has today, she was given a chance by no other than Will Smith and his wife.

Most of us who lived through the 1990s have at the very least caught wind of Queen Latifah’s royal greatness—even if rap wasn’t our go-to. However, in a previous lifetime, our humble Queen was known as Dana Owens, and she lived in a housing project in East Newark, N.J. Let’s face it: it’s not everyday that someone (even if they’re wildly talented and driven) makes it out of “the projects” and into stardom.

Yet Queen Latifah’s life thus far is a bonafide testament to the old adage, ‘anything is possible if you put your mind to it,’ clichés be damned.

Of course, badass as she’s always been, no one rises to the top without a little help along the way, and Queen Latifah is no exception. She was blessed not only with a loving, supportive family, but also with friends who helped her get where she was going. Her longtime friendships with Will Smith and his wife Jada Pinkett, for instance, are a perfect example of the kind of radically supportive friendship we could all do with a little more of.

Little did a 17-year old Queen Latifah know she was about to meet Jada Pinkett, who was even younger than she was, and about to become her number one fan. Latifah was performing in a club—with her mom in the audience. Jada was wowed by Latifah’s talent, and the two have been friends ever since, for 30+ years now.

Not long after, Will Smith offered her a first acting job as a guest star on his hit sitcom, The Fresh Prince of Bel-Air, which played a major role in helping the aspiring rapper kick off her acting career. She had zero experience when Will got the show to take a chance on her. And all this before Will and Jada had even started dating. You gotta love that.

Throughout the 90s, Latifah’s rap and acting career both took off, and Jada and Will both thrived as actors too, eventually deciding to tie the knot in ’97 and start a family a few years later.

Fast-forward a couple decades and Latifah would finally share the screen with Jada in Girls Trip, for which Latifah would win her first BET acting award in 2018. Somehow fittingly, the film is about friendship, and follows four friends who go to New Orleans to reconnect at a music festival.

In 2020, the trio is still close as they ever were, with Jada and Will’s kids, now 21 and 18, knowing Latifah simply as “Auntie La,” and Will always jumping at any chance he can to support Latifah’s endeavors. Reality check: one way or another, friends help friends rise up and make their way in life, and for those of us who are lucky, those friends become family somewhere along the way too.

But a Queen’s journey is not without its obstacles

Queen Latifah was just 16 when she told another longtime friend, actor Michael Kenneth Williams, that she wanted to be a rapper.

“Female rappers were relatively taboo, so I was like, ‘OK, that’s cool. Be all you can be!’ ” Williams recalls with a laugh. “But in my wildest imagination, I didn’t think she would really become what she is today, simply because I’d never seen it before. Who makes it out of the ‘hood and does that? But she proved me wrong.”

Songs like “Ladies First” and “UNITY,” which discuss domestic violence, street harassment, and sisterhood made her an undeniably powerful voice to be reckoned with. Latifah’s debut album All Hail The Queen not only had an unapologetic feminist message, but it also featured fellow female rapper Monie Love, at a time when the industry very rarely made space for more than one woman at a time.

Much like her good friend Will Smith, Latifah is one of the chosen few who’s been able to go from a Grammy-winning rap career to an Oscar-nominated acting career—in spite of the resistance she faced from the TV and film industry.

Actors did not like it. A lot of them talked a lot of smack (at the time) about rappers coming in and taking all the gigs.

But Latifah kept on and in 2003 won a Black Reel Award for Outstanding Supporting Actress for Chicago. She was nominated for an Oscar that year too. Her list of awards is too long to get into, but I will mention that she also won an Emmy for her starring role in HBO’s Bessie (2015), a film about legendary blues singer Bessie Smith.

What else? She’s had her own talk show, she’s done voice-overs for video games—you name it, Latifah’s probably kicked its ass. Most recently, she guest starred in a TV miniseries called Hollywood, about a group of aspiring actors and filmmakers during the Hollywood Golden Age, post-World War II. She played none other than Hattie McDaniel, the first Black woman to win an Academy Award for her role in Gone With the Wind (1939).

But, in her signature boundary-breaking fashion, she recently told Global in response to HBO Max’s temporary but contentious removal of the movie from its streaming service, that Gone with the Wind should indeed be “gone with the wind.” The film has long been criticized for romanticizing slavery and the Civil War-era American South.

“The story behind McDaniel’s Oscar win is not as shiny as the golden trophy,” Queen Latifah adds. “They didn’t even let her in the theatre until right before she got that award. Someone came outside and brought her into the auditorium. She wasn’t even allowed to sit in there…the opportunities at that time and the way that those in power in that business were relegating us and marginalizing us and not allowing us to grow and thrive after that was just terrible. And a lot of that is still around today.”

Body positive even before body positivity was a thing

Now, if all that boundary-pushing, justice-spouting, and royally deserved recognition wasn’t enough already, it’s not. Enough, I mean. Today, at 50, Latifah remains an icon of empowered body positivity.

On top of breaking into rap as a non-conventionally attractive/thin woman, and breaking into TV as a rapper, she’s also broken into the beauty industry as a “plus-size” Queen. Although producers have most definitely encouraged her to lose weight, she’s always said, “take me as I am,” which, let’s face it, is still today a revolutionary act.

Likely noticing her steadfast, mold-shattering glow, People magazine chose her in 2003 as one of their “50 most Beautiful Women.” In the mid-2000s, she teamed up with Covergirl, and is today an influential behind-the-scenes advocate in the world of ‘inclusive makeup’ for women of color, helping pave the way for stars like Rihanna to keep on pushing that agenda today.

Bottom line: anyone who adopts the Queen’s philosophy—that is, no wall is built to stand forever—will probably do some good in this world. The Queen herself won’t quit: just last year, she tried her hand as a developer of affordable housing in her hometown of Newark, N.J., giving new meaning to “giving back.” Why not be inspired by stars like these who treat friendship, family, and justice as a guiding light?