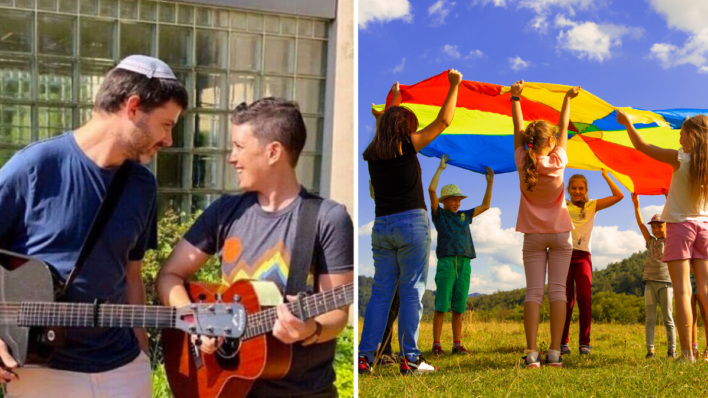 One queer camp counselor turned the tables in the best way after an overnight summer camp asked them not to come back.
By Amber Dowling    June 15, 2022

One queer camp counselor turned the tables in the best way after an overnight summer camp asked them not to come back.

Summer camp is a memorable experience whether you’re a camper or a counselor. It’s where you make memories and friends and have unforgettable experiences you just can’t get at home. As a parent, you also hope it’s somewhere where kids learn more about inclusion and kindness. Unfortunately, that wasn’t Shira Berkowitz’s experience with one camp back in 2007.

Back then, Berkowitz (who identifies as queer and uses the pronouns they/them) was 22-years-old. They loved their job as a counselor at an overnight camp in Minnesota and according to The Washington Post, Berkowitz was on track to becoming the program director for ninth-graders.

RELATED: Gay Couple Gets Kicked Out Of Restaurant, Manager Has The Best Response

Then the summer ended and Berkowitz was asked not to return. According to the counselor, fellow staffers would, “Say inappropriate things about my sexuality, and question whether it was right that I would be in the same cabin of same-sex kids.”

Parents also wondered whether it was appropriate and voiced concerns about Berkowitz’s gender identity and sexuality, which is why Berkowitz believes they were asked not to come back.

Why Camp in Minnesota Asked a Queer Counselor Not to Return

Berkowitz was disappointed and understandably hurt, but after some self-reflection, they decided to try another camp. They had grown up attending Jewish camps and still really wanted to be a part of the experience. So Berkowitz got a job at an overnight program in Rocky Mount, Missouri.

“[It was] a very accepting place to be, but it was also very isolating to be one of the only queer people at camp,” they explained to the Post. If Berkowitz felt that way, they knew others were probably feeling similarly. They were motivated to take matters into their own hands.

Camp Indigo Point in Makanda, Illinois, was born. The nondenominational camp is specifically targeted to LGBTQ campers and staff and offers weeklong programs beginning this week. All 95 spots were filled by mid-May and there are more than 50 kids on the waitlist. Campers range from Grades 2 through 11 and are coming in from more than 25 states — including Alaska.

“We had no idea the real need that was out there for this camp,” Berkowitz explained, adding that so far they’ve given out $12,000 in scholarships funded by community leaders, rabbis, and local families.

How a Queer Counselor Created Their Own Summer Camp

Camp Indigo Point features all the traditional overnight activities you would expect from camp. Think swimming and zip-lining, archery, sports, and arts and crafts. There’s also horseback riding and kayaking, not to mention tree climbing.

“We believe that LGBTQ+ youth deserve a place and environment made specifically for them in community and safety with LGTBQ+ adults to thrive as kids: Have fun, build lasting friendships, take risks, and build joy,” reads a description on the camp’s website.

For its first summer run, Camp Indigo Point has 29 staffers. Berkowitz organized everything with Dan Grabel, the director and owner of the camp’s property in Illinois. A St. Louis rabbi and advocate named Daniel Bogard is also involved. Initially, the trio was hoping for 20 kids.

RELATED: Dad Kicks Out Teen Son For Being Gay, Wife Instantly Breaks Up With Him

“How much this has really taken off put into sharp focus the need for this type of program,” Grabel also told the Post. “We have an underlying philosophy that we’re never going to turn a kid away because of their financial situation.”

“I thought it was pretty amazing that they saw the need, and they went for it,” Denver parent Ron Mills told the publication after signing his 13-year-old son up.

They’re doing a major service for kids that are unable to really find a community.

How One Special Camp Is Allowing Children to Be Themselves

This story proves there’s still a lot of work to do when it comes to accepting people from all walks of life, but it also reminds us that just because people may not understand or accept you somewhere doesn’t mean that no one out there will.

Berkowitz was probably devastated when they were asked not to return to a camp they loved, but instead of dwelling on it they moved on and created something even more beautiful. Now, countless kids can find their own tribes and make the kind of summer memories every parent wants for their kids — no matter what their gender identity or sexuality.

This story is also a great reminder to practice kindness and empathy in our own daily lives and to accept others for who they are. Maybe if you’re enrolling a kid in a program or camp, research whether there are any non-traditional or special programs in your area that may speak to them and who they are. Or, if you see the need for such a program why not take things into your own hands and start one?

You could also find a more manageable way to make a difference. Consider volunteering your time as a coach or assistant, donating funds, or even just spreading the word. After all, you never know when or how you may affect someone else’s life for the better.

accept people for who they are
“The greatest gift that you can give to others is the gift of unconditional love and acceptance.” – Brian Tracy
Tags
Share
← Prev Post Next Post →