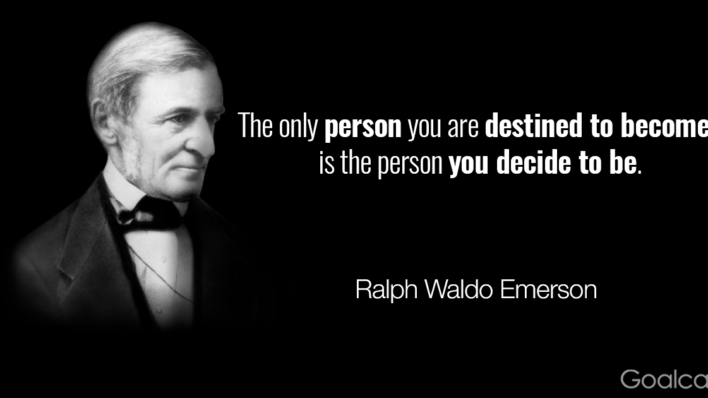 Ralph Waldo Emerson was an American poet, essayist, and philosopher. Born in 1803 in Boston, Massachusetts, Emerson won fame as
By Flavia Medrut    July 30, 2018

Ralph Waldo Emerson was an American poet, essayist, and philosopher. Born in 1803 in Boston, Massachusetts, Emerson won fame as

Ralph Waldo Emerson was an American poet, essayist, and philosopher. Born in 1803 in Boston, Massachusetts, Emerson won fame as the leader of the transcendentalist movement. In his early years, the philosopher was invited by Boston’s Second Church to serve as a pastor and was later ordained. Unfortunately, after only two years, Emerson’s wife died of tuberculosis – this event made him question his thoughts and beliefs. The man who once believed in biblical miracles decided to resign his pastorate.

Having found the answers to all those questions following his wife’s death, Emerson formulated his philosophy of transcendentalism by anonymously publishing a little book called “Nature”.

He strongly believed that the individual must have the courage to look into his own heart for spiritual guidance and trust his intuition. Emerson’s views suggest that men are capable of generating completely original insights and that the truth can be experienced directly from nature, without any divine help.

Emerson’s work has greatly influenced other writers and thinkers; his teachings are highly valued in the history of American culture. Do not go where the path may lead, go instead where there is no path and leave a trail.

To be yourself in a world that is constantly trying to make you something else is the greatest accomplishment.

People do not seem to realize that their opinion of the world is also a confession of their character.

The only person you are destined to become is the person you decide to be.

What you do speaks so loudly that I cannot hear what you say.

To be great is to be misunderstood.

You cannot do a kindness too soon, for you never know how soon it will be too late.

Tomorrow is a new day. You shall begin it serenely and with too high a spirit to be encumbered with your old nonsense.

Nothing is at last sacred but the integrity of your own mind.

Once you make a decision, the universe conspires to make it happen.

For every minute you are angry you lose sixty seconds of happiness.

When it is dark enough, you can see the stars.

Peace cannot be achieved through violence; it can only be attained through understanding.

Without ambition one starts nothing. Without work one finishes nothing. The prize will not be sent to you. You have to win it.

Dare to live the life you have dreamed for yourself. Go forward and make your dreams come true. Most of the shadows of this life are caused by standing in one’s own sunshine.

It is one of the blessings of old friends that you can afford to be stupid with them.

What lies behind us and what lies before us are tiny matters compared to what lies within us.

Always do what you are afraid to do.

The only way to have a friend is to be one.

Happiness is a perfume you cannot pour on others without getting some on yourself.