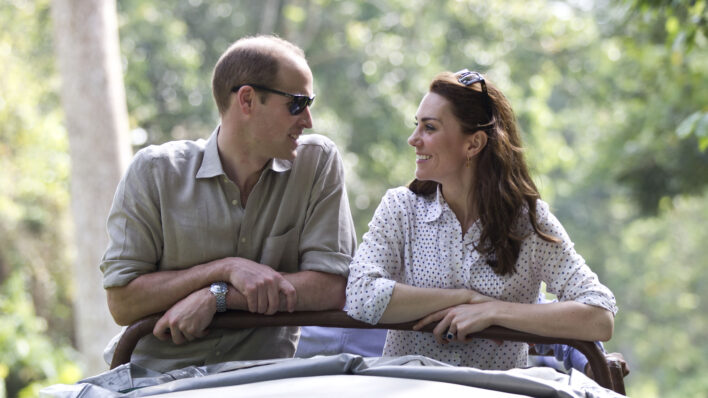 Welcome to #RelationshipGoals, where we’re giving the stage to the power couples we admire. From admirable long-term relationships to inspirational
By Matt Valentine    March 18, 2019

The quintessential “girl meets prince” fairytale come to life, Kate Middleton and Prince William’s high-profile romance has seemed to captivate the world from the very beginning.

The year was 2001 and all eyes were on Prince William who was preparing to venture off to St. Andrews University, ironically referred to as Britain’s “top matchmaking university” due to its reputation for spawning an unusually high percentage of married couples.

“St. Andrews was so small, so close, so intimate — and so intense — that it, it did lend itself to those sorts of relationships,” says ABC News Correspondent Katie Nicholl.

Prince William, who, due to a media ban on campus and for all students and staff for the first time in his life, was able to live like a normal person, enjoying the simple pleasures of making friends and visiting the grocery store.

But it wasn’t long before his life was turned upside down for an entirely different reason.

For more than a year, Prince William and one Kate Middleton were good friends and even became flatmates along with two other close friends.

“Well I actually think I went bright red when I met you and sort of scuttled off, feeling very shy about meeting you,” Middleton told ABC News when speaking of the first time she met William.

Then came the night of legend, March 27th, 2002, at the St. Andrews University fashion show when Kate wore the infamous see-through dress that caught William’s eye.

Why Kate Middleton and Prince William are a true power couple

“Kate hadn’t told him exactly what she’d be wearing,” remarked Nicholl about the fashion show. “So, when she strode out in uh, well, her underwear and a see through dress, I mean, William was gobsmacked, [He] just turned to [his friend] Fergus and said, ‘Wow. Kate’s hot.'”

“She didn’t dress in a sort of Euro-trash revealing way, it was always very homely,” said Andrew Sands, one of the organizers in charge of selecting models for the show. “So people were desperate to see her in slightly more scanty attire.”

Prince William was positively floored and found his chance to make a move at a party later that night.

“She was, I think, as shocked as she was flattered. And she pulled away, because, at the time, she was dating a fourth-year student called Rupert Finch,” said Nicholl. “Well, that was the start of their relationship, and poor Rupert Finch. Well, he didn’t stand a chance, did he?”

Fast-forward two years, Kate and William were photographed together for the first time skiing the slopes of Klosters in Switzerland. This was also the first of many media headaches for the pair when The Sun published the photo, a blatant breach of the agreement the publication had in place with the royal family at the time.

And one year later, in 2005, Kate and William graduated St. Andrews together. From there, they’d be spotted together for several major public appearances, including fellow royal Camilla’s daughter Laura Parker-Bowles wedding.

The world was quickly falling head-over-heels for this fairytale match, when suddenly it was hit with major disappointment.

Much of what fascinates people about Middleton and Prince William’s story is how perfect it all seems. It feels like it was ripped straight out of a book of fairytales — and they’ve got the happy ending to prove it.

But they had their share of challenges along the way as well.

In early 2007, Kate and William decided to break up and, for a time, went their separate ways with Kate taking a vacation to Ireland with close friends.

However, in hindsight, Middleton says that this time apart only served to strengthen their relationship and give them better perspective.

In an interview with Sky News, Middleton said, “I think I at the time wasn’t very happy about it, but actually it made me a stronger person… You find out things about yourself that maybe you hadn’t realized.”

“I think you can get quite consumed by a relationship when you’re younger. I really valued that time for me as well although I didn’t think it at the time, looking back on it.”

Just six months later, Kate and her sister Pippa were seen attending a tribute concert for Princess Diana, where Prince William was also in attendance with Prince Harry two rows ahead. And in early 2008, the couple was once again back at Klosters ski resort looking as in love as ever.

“We had a little private time away together with some friends, and I just decided it was the right time really,” William told Sky. “We’d been talking about marriage for a while, so it wasn’t a massively big surprise, but I took her up somewhere nice in Kenya.”

And on April 29th of 2011, Prince William and Kate Middleton tied the knot with a truly fairytale ceremony at Westminster Abbey, with guests and 72 million viewers around the world tuning in to watch. Kate officially became a royal and gained the title, Duchess of Cambridge (and Countess of Strathearn, Lady Carrickfergus).

The late Princess Diana, mother of Prince William and Prince Harry, was remembered in spirit on their magical day.

“I think she would have loved the day and I think,” William told E! News. “Hopefully, she’d be very proud of us both for the day. I’m just very sad that she’s never going to get a chance to meet Kate.”

Shortly after settling in Wales with their English Cocker Spaniel Lupo, the Duchess and Prince wasted no time getting to work, so to speak.

In December, 2012 St. James’ Palace announced that the Duchess of Cambridge and Prince William were expecting their first child.

Kate would later be hospitalized for hyperemesis gravidarum, a form of severe morning sickness, but with William standing at the ready, the two got through the difficult time. And on July 22nd, 2013, Kate would give birth to their adorable son, Prince George.

Less than two years later, Middleton and Prince William would give birth to their second child, this time a Princess in Charlotte, the first princess in the royal family in twenty-five years.

William told BBC News at the time, “It is fantastic having a lovely little family and I am so thrilled. Catherine has been doing an amazing job as a mother and I’m very proud of her.”

Exactly one year later, the royal couple stood at Olympic Park in London with their young Prince and Princess at the launch of their own charitable cause, Heads Together, an organization aimed at ending the stigma around mental health.

Through the organization, it’s the young royal’s hopes to start a dialogue in homes and schools about mental health and to help those suffering to have a voice. Middleton, who is especially passionate about the cause, remarked, “People often ask me why I am so interested in the mental health of children and young people. The answer is quite simple — it is because I think that every child should have the best possible start in life.”

And one year later, the young royal’s family grew again as the palace announced that the Duchess was pregnant once again with baby number three, Prince Louis, who would be born on April, 23rd, 2018.

Being a royal is demanding, if nothing more than for the emotional toll that constantly being the center of heavy media attention places on one’s mind and relationships.

However, Kate Middleton and Prince William have found strength in family, not only with one another but in the love they share for their children. As the Duchess says, it’s about the simple moments with your loved ones that give you perspective and make it all worth it.

“Spending quality time together is such an important aspect of family life and for me, as a mother, it is the simple family moments like playing outside together that I cherish,” Kate wrote in a letter for Children’s Hospice Week.