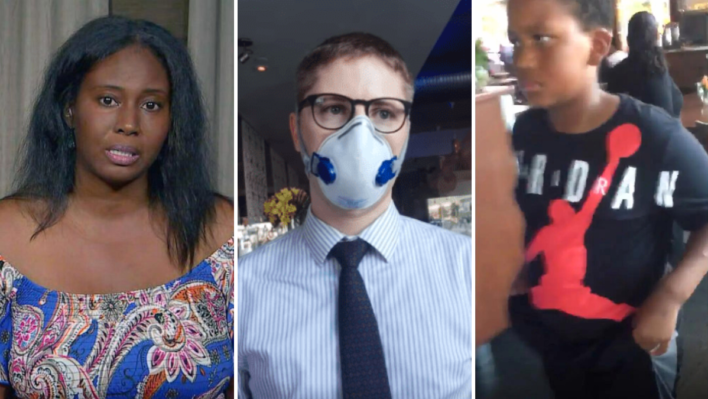 Meanwhile, another boy dressed similarly was allowed to dine inside.
By Amber Dowling    November 2, 2022

Meanwhile, another boy dressed similarly was allowed to dine inside.

The world is full of double standards, but that doesn’t make them right. So it’s heartwarming to see people come together online after one nine-year-old boy was denied entrance to a restaurant with his mom for the way he was dressed when another little boy who wore a similar outfit ate inside.

How a Family Lunch Turned Into a Frustrating Situation

In 2020, Marcia Grant wanted to take her nine-year-old son Dallas out for lunch in Maryland. But when they arrived at Ouzo Bay, an upscale Greek restaurant, they were denied entrance because Dallas’ outfit violated the dress code.

According to an interview with ABC News, Dallas was wearing an Air Jordan t-shirt with athletic shorts and sneakers. After they were denied entrance, Grant began filming her interaction with an unidentified employee. She turned the camera towards another boy inside the restaurant, who was dressed similarly and eating with his family.

RELATED: ‘Speak English Or Don’t Speak At All’ – Woman Attacks Man At Denny’s, Instantly Regrets It

“I can’t really say why they wouldn’t let me in the restaurant originally. But once I pointed out to the guy that there was a white kid there with similar dress, I can only imagine that it was based on the fact that Dallas was Black,” Grant told ABC News.

“I kept on insisting that, you know, the white kid has the same thing that Dallas has on, why won’t you let my son in,” she continued. “He just would not, regardless of how hard I pushed for [Dallas].”

Why One Upset Mother Shared Her Story Online

In the interview, Grant explained the importance of speaking up and calling out racist behavior, especially when it involves the next generation. She revealed this wasn’t the first time her son has experienced a situation like this.

“I have faced racism time and time again, but it’s hard AF, when you have to see your child (9yo) upset because he knows he’s being treated different than a white child!!!” she also shared on Facebook.

“He goes to a predominately white school … and they teach the kids that everyone is the same,” she continued to ABC News. “So for him to see a kid outside (at the restaurant) that looks like one of his friends at school, it was tough for him.”

She added that is why she shared the video, which gained a lot of traction and was picked up by various outlets. “He knows I’ll always fight for him,” she said. “We just have to keep on pushing for social justice.”

“This should have never happened; the manager seen in the video has been placed on indefinite leave,” the company said in a statement. “We are sickened by this incident. We sincerely apologize to Marcia Grant, her son and everyone impacted by this painful incident.”

The company also revealed it had removed the dress code policy for all children 12 and under who frequent their restaurants with an adult.

How a Community Came Together in Support

Since the post went viral, many people have reached out with positive messages to Grant, sharing their stories and sending support to show her she’s not alone. The post was shared nearly 6,000 times and attracted more than 1,200 comments.

“Marcia, I have a precious little boy who is seven. I have cried so much seeing what you and your sweet son went through. Thank you for standing up for Dallas and all of the other little black boys out here,” wrote one person.

RELATED: Lyft Passengers Make Racist Comments before a Ride – Driver Hits Back with the Best Response

“This is disgusting. Bravo to this woman. She taught her son how to stick up for himself and what’s right without resorting to violence, all while exuding class the manager certainly lacked,” wrote another.

Some offered to take her family out to lunch, a sentiment even shared by some law enforcement officers. Grant revealed to ABC News that, after the story took off, a Baltimore police officer recognized her son from the video and apologized to him for what happened.

“He said I could come over to his house anytime for dinner,” Dallas told the outlet. “Makes me feel really good.”

How One Mom Proved the Importance of Pushing for Change

While it’s sad to see what one family had to go through, it is heartwarming to see so many positive responses from the situation emerge, thanks to how Grant handled it. By sharing her post, calling for change, and calling out a policy with double standards, people online also helped to spread the message.

As a result of those communities coming together, the restaurant modified its policy, and the manager involved was made to think about his actions. Meanwhile, many others stepped in with kind offers that picked up this kid’s spirit.

It reminds us that when we see something that isn’t right, we should call attention to it calmly. Whether that’s sharing something on social media, calmly calling out an establishment with a phone call or email, or even sending your support to those wronged, it can make a world of difference.

Even more importantly, when you’re facing that kind of situation, community support can make you feel less alone.