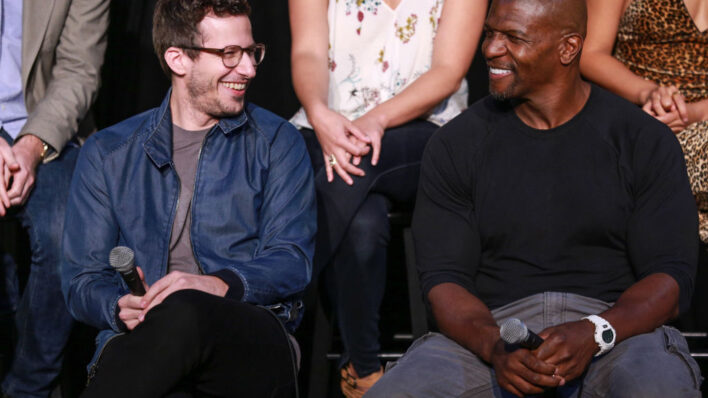 Andy Samberg Supports Terry Crews, Calls Him a ‘Miracle’ for Speaking Out on Assault and Shows Power of Encouragement

The 49-year-old accused talent agent Adam Venit of sexual assault – an accusation Venit has denied. However, Crews was applauded for his bravery since male survivors of sexual violence are even less likely than female survivors to come forward.

Despite being ridiculed online, even by famous figures such as rapper 50 Cent, the former football player has never wavered from his account, and public opinion remained on his side. While the Los Angeles District Attorney decided against pursuing Crews’ case, the star testified last week in front of the U.S. senate – an act many, including all of his Brooklyn Nine-Nine co-stars, have applauded.

Speaking on the red carpet of his newest movie, co-star Andy Samberg told the Associated Press: “He’s a miracle. Terry’s the best guy. I am proud to know him.”

Samberg along with his castmates followed Crews’ Senate appearance and speech, supporting him all the way. “We have a cast text chain and we were all texting him how incredible it was,” he said.

NINE-NINE! We’re here for the #Brooklyn99 panel at #UTVFYC.🚨 pic.twitter.com/3prkYZLYQd

Survivors of sexual assault often face ridicule, shaming and blame, with outsiders, friends, and even family and law enforcement questioning their account of events, shifting some or all of the blame on them.

“What were you wearing? How much did you drink? Why didn’t you fight back?” are questions all to often heard by survivors, making it all the more important for loved ones to openly and publicly support them.

Male survivors often face disbelief, with their strength and masculinity being questioned following sexual harassment and assault. U.S. Senator Diane Feinstein, for example, asked Crews during his testimony why he didn’t fight back. And in a now-deleted social media post, rapper 50 Cent made fun of Crews.

As for Crews’ response, he told Senator Feinstein that with the help of his wife Rebecca he has steered himself on a oath of non-violence, an essential mentality for him, especially as a black man living in America.

Watch Crew’s powerful Senate testimony on his own experience with sexual assault and his support for the Survivors’ Bill of Rights below: