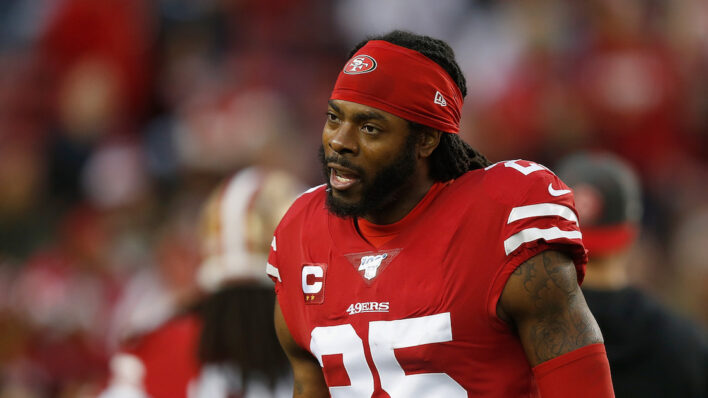 Richard Sherman, cornerback of the San Francisco 49ers, was a close friend of Kobe Bryant and reveals how he has been affected by the legendary player.
By Kawter    January 31, 2020

Richard Sherman, cornerback of the San Francisco 49ers, was a close friend of Kobe Bryant and reveals how he has been affected by the legendary player.

Richard Sherman is a fiery, at times controversial figure in the world of the American football but he there is something to be said about the 49ers’ cornerback’s inspirational tenacity.

As we dangerously approach the 54th Super Bowl, it is worth taking a look at Sherman’s comeback on the scene after invalidating Achilles injury in 2017. The truth is, the man’s strength extends beyond his prowesses on the field and we can learn much from his outlook on overcoming sometimes debilitating obstacles.

The recent passing of Kobe Bryant, the legendary basketball player, was especially hard on Sherman. The news found at him at what was supposed to be a happy, celebratory time. He had just arrived in Miami, where the Super Bowl is to take place, with the rest of his team and was sleeping when the 49ers’ general manager John Lynch broke the news to him.

But in the light of the upcoming, long awaited Super Bowl, Sherman still found a bittersweet strength in his mourning for Kobe, who was a friend and mentor to him.

A childhood in a rough, violent neighborhood

Sherman grew up in the midst of inner city poverty, in Compton, California. The streets were unpredictable, as an old neighbor told NBC Sports. “The Shermans never knew exactly what they would see outside their home at any hour of the day or night,” he said.

Richard’s father, Kevin Sherman, worked 27 years as a refuse collector truck operator. His job allowed him the time to be coaching sports to kids in the afternoons. Both him and his wife Beverly, never sheltered their kids from the realities of their environment.

Our kids saw all of [violence]. In return, those people we call friends are helping us teach our kids the ins and outs of what is not to be done out here. The streets have a different way of life, so we want to make sure you know both sides.

Perhaps, his parents’ approach to his upbringing has allowed Richard to become the bold force that he is today. The uncertainty of life in such a neighborhood was something Richard refused to allow in his mindset.

“He had his own little world going on,” said Veretta Elmore, mother of Jason President, an old friend of Richard’s. He just knew what he wanted from the time he was young.”

Richard always wanted to be a professional athlete and despite the obstacles that faced inner city kids, he never lost track of his goal. At school, he was a high achiever. He knew he needed to score a scholarship, as his parents would not be able to afford paying for all of their three children.

He finished high school with a 4.2 GPA. And yes, he did more than beat the odds of inner city upbringing–he was granted an athletic scholarship to attend Stanford University where he pursued an undergraduate degree in communication. Evidently, Richard joined the Stanford Cardinals football team and played with them from 2006 to 2010.

Not long after, in 2011, he was drafted by the Seattle Seahawks. The rest is history.

How Kobe Bryant taught him the ‘Mamba Mentality’

In 2017, Richard’s season with the Seahawks was interrupted by a rupture of his right Achilles. It was the end of his time with the team and the beginning of a process of recovery that paved his comeback.

Surprisingly, a large part of his coming back is owed to Kobe Bryant. Richard had seen Kobe finish a game with the same injury.

I saw him do it. I saw him make two free throws with a torn Achilles. And once I tore mine, I knew I had to walk it off.

Sherman even attributed his perseverance, at the time of the injury, to Kobe Bryant, who was known for his relentless drive to win and excel.

Richard grew up watching the Los Angeles Lakers and he was a huge fan of the team. As he watched the basketball games with his grandmother, he soon elected Kobe Bryant as his idol.

The first time he met the legendary Kobe Bryant was for a Nike photoshoot, after the Seahawks won Super Bowl XLVIII. They bonded at that time but Richard’s injury is what brought them closer.

Since Kobe had gone through the same injury, he was able to help out Richard throughout the rehabilitation process. He received a call from the Mamba himself.

When I first called to check on him I said, ‘Are you all right, I want to make sure you are not being a baby about it?’

Richard took Kobe’s advice to heart–after all it was the advice of a legend–and he admitted how helpful it was to ESPN.

He gave me some pointers and things I needed to do early on in the process to make sure that I expedited the healing process and I was more proactive than reactive. I think that was one of the big things.

Not only was the healing process successful, it represented the paving of Richard’s great comeback. His career with the Seahawks over, it was time for a new phase. He surprised everyone by negotiating a $39 million contract for himself as a free agent, only aided by his wife, with the San Francisco 49ers. He joined them in 2018. Most people frowned at this bold move.

Two years later, he is playing the Super Bowl.

Being his own agent and negotiating his own contract raised many eyebrows; there was skepticism surrounding his risky power move. Yet, Richard didn’t see it that way.

You talk about risk like I’m out there being reckless. If I decide to jump a route or bait a quarterback, it’s something I’ve studied, thought about and weighed the consequences long before doing it. Don’t call it risky and assume that just by being an athlete I got away with it. I trust what I know.

The thing is, the man is both “street-wise and book smart, “savvy and stubborn” as Jerry Brewer, a columnist for The Washington Post who has been covering Sherman for years, affirmed. It is easy to see him as just any other athlete but as we know by now, the truth of his story is much, much different.

And this difference was recognized by no other than Kobe himself, who saw in Richard, the same fire and determination that had moved the legend throughout his career.

His mentality is what separates him. From being overlooked, from being kind of thought of as someone who won’t be able to maximize his potential, I think he uses that as fuel to drive him and propel him. I’m excited for him to come back and show the world what he’s got, man. It’s going to be awesome.

Yes, Sherman managed to overcome all the odds perceived to be against him. What Kobe saw in him manifested in real life and ended up being proving that these two friends had the same strong will in common. As Sherman said, “We’re different animals but the same beast.”

The ‘Mamba Mentality’ lives on

Needless to say that Kobe’s death, only a week before Super Bowl LIV was to take place was a blow for his friend, Richard. “He was a friend of mine,” Sherman said on Super Bowl Night. “He was a mentor. He meant a lot to this world. He made a positive impact, and there is nothing that I can say to really quantify his impact on myself and on others.”

On Instagram, Richard honored the late Kobe Bryant through a touching post, whom he considered a “genuine human being.”

However, he found one glimmer of light through the grief, inherited from Kobe’s friendship and the strength of his character.

I was kind of down, I was in the dumps, and then I just thought about what he would tell me. He would tell me, ‘Stop being a baby. And man up.’ And play it, and do it in his honor and win this game for him. And that’s what we’re going to try to do. I’m going to go out there and try to play some dominating ball, just like he wanted. The Mamba Mentality lives on.

Whatever the outcome of the Super Bowl LIV, we can count on Richard Sherman bringing his full potential to the field. With his own determination, the same trait that has catapulted him into the unquestionable force that he is today, and the will to honor his late friend, it is impossible to doubt his upcoming performance.

While he may no longer be with us, Kobe’s impact on the world, whether friends or fans, is undeniable. He left an indelible trace on this earth and his legacy will continue to impact generations.