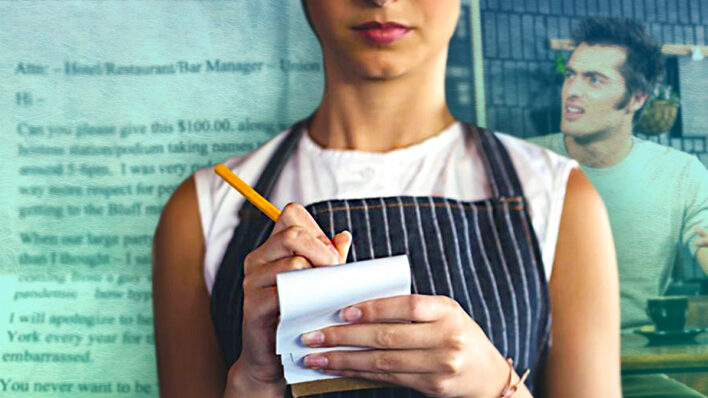 One customer decided to send $100 and an apology letter after swearing at Maine restaurant workers.
By Sophie Tolias    April 13, 2022

One customer decided to send $100 and an apology letter after swearing at Maine restaurant workers.

With everyone being short-staffed, it’s not easy to work in a restaurant these days.

Tammy Ramsey, a hostess at a restaurant in York, Maine, knows that firsthand. Over a holiday weekend, an angry customer waiting for a table swore at her and a co-worker, and then stormed out.

Rude customers aren’t unheard of, obviously, but what happened a few weeks later was rare. A letter arrived at the restaurant, and it was addressed to Tammy.

In the letter, the man apologized and said he never acts that way toward people in the restaurant industry, especially during such challenging times. He said a few cocktails in the hours leading up to the exchange likely played a part in his behavior.

Tammy, who has worked at the Union Bluff Hotel for 25 years, said she can’t remember exactly who the customer was, but remembers someone swearing at her and storming out after waiting for a table for an hour and a half.

I feel bad. This coming from a guy who tells people to be kind to service staff and tip big post-pandemic – how hypocritical.

The man wrote in the letter

“You never want to be ‘that guy’ and that day I was ‘that guy.’ Sincerely sorry,” he wrote before signing off, “an embarrassed customer.”

Patience and Kindness Can Go a Long Way

Enclosed with the letter was a $100 bill, which she split with another hostess. “Honestly it gave me the goosebumps,” Tammy said.

I believe there’s genuinely nice people out there and we all make mistakes. Everybody has a bad day. I’m pretty sure I’ve been mean to people and I can honestly say I felt bad, but I’ve never written a letter like that so he should be commended for that.

As we climb out of the pandemic, it’s important to remember to be patient and kind. And if we do make a mistake, it’s important what we do after. Tammy said she hopes sharing the letter will prompt more folks to own up to their mistakes. At the end of the day, we all make them, and a little bit can go a long way, she said.