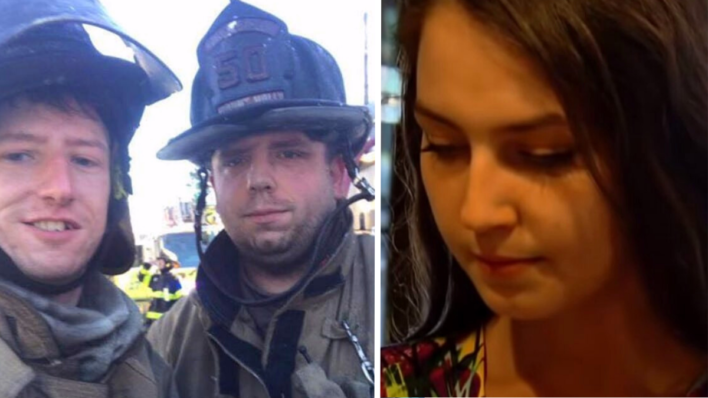 One waitress’ deed of paying for her customers’ meal brought her kindness back to her in an unexpected way.
By Amber Dowling    January 31, 2022

One waitress’ deed of paying for her customers’ meal brought her kindness back to her in an unexpected way.

Many of us try to pay it forward in life and don’t necessarily expect anything in return. So when a person goes out of their way to help you out after you’ve done a good deed for them, it can be downright heartwarming.

A 24-year-old server named Liz Woodward found herself in a very similar situation back in 2015. At the time, she was working as a server at 130 Diner in Delran, New Jersey. According to Today, it was about 5:30 in the morning when Tim Young and Paul Hullings asked her for the biggest cup of coffee the diner had.

“I had been following the New Brunswick fire on the news,” Woodward told the publication. “This was their first meal in over 24 hours; the least I could do was buy it for them for all they do every day.”

So that’s exactly what Woodward did- rather than bring a bill with a dollar amount on it, the server wrote a sweet note thanking the guys for the tough job they did each and every day.

Your breakfast is on me today. Thank you for all that you do; for serving others & for running into the places everyone else runs away from. No matter your role, you are courageous, brave, and strong…Thank you for being bold and badass every day! Fueled by fire and driven by courage- what an example you are. Get some rest.

The guys teared up and thanked her before they left, and Woodward figured that was that.

Young and Hullings were so touched that they began urging their family, friends, and co-workers to eat at the diner as well. They decided to try and find Woodward on Facebook in order to do something special for her. And that’s when they discovered that Woodward was facing some tough times of her own: She had been trying to raise money for her quadriplegic father, as the family needed a wheelchair-accessible van. Immediately, they decided to help.

“Turns out, the young lady who gave us a free meal is really the one that could use the help…” Young wrote in a Facebook post, sharing the GoFundMe campaign that Woodward had started.

The post- and story- quickly went viral. It appeared on ABC News, Today, BuzzFeed, and by September 2015, Ellen DeGeneres had invited Woodward and the firefighters onto her daytime talk show so they could share their story there too. In addition to providing the firefighters with free meals at the diner for the next five years, the host also presented Woodward with an oversized cheque- to the tune of $20,000.

Soon, people everywhere started sharing the post, and the fund more than surpassed its original $17,000 goal. In the end, Woodward and her family collected $86,500 from touched, good citizens.

The firefighters even met Woodward’s dad, and brought him Phillies tickets.

Five years prior to that fateful meal at the diner, Woodward’s father, Steve Woodward, had suffered a ruptured brain aneurism, followed by two strokes. As a result, he had become completely reliant on help in order to survive.

“As of right now, he will more than likely never walk again (but nothing is impossible!) and he has an extremely limited range of motion,” his daughter originally shared on the GoFundMe page. “He is entirely dependent on a caregiver and cannot feed, bathe, or change himself. He has had to re-learn how to swallow, how to speak and communicate- even how to process thoughts and think.”

The family had been struggling to keep up with the bills, but saw what a difference getting out and about made in the patriarch, which is why they focused on raising money for the van. As it turns out, Woodward’s good deed had also inspired the owner of a specialty car company called Mobility Ventures. They donated a brand new MV-1 to the family so that the crew could put their funds towards helping to pay their mounting bills instead.

“It’s not a car, it’s not a van, it’s not a truck.. It’s an MV-1! (Or a tank, as we like to call it!) It’s freedom. It’s hope on wheels. It’s a life for my parents and for our family and it is an absolute DREAM COME TRUE!” Woodward later shared on Facebook.

One of the reasons Woodward’s story resonated with so many people is that even though she and her family were in need, it didn’t stop her from showing her appreciation to two random firefighters through a kind act.

The two of them shared my hand-drawn helmet and words and then my family’s story, and the rest of the world has since paid it forward by BEING KIND. By having their ‘faith in humanity restored.’ Please know- good people are EVERYWHERE. If you can’t find one, BE ONE.

It’s a reminder we could all use, whether that means paying for the person behind you at the drive through, donating items that you would typically sell to someone in need, or even just being generous with your time. It can all make a big difference in someone else’s life, plus helping others just inherently feels good.

Kindness Lasts Forever
“Carry out a random act of kindness, with no expectation of reward, safe in the knowledge that one day someone might do the same for you.” – Princess Diana
Tags
Share
← Prev Post Next Post →