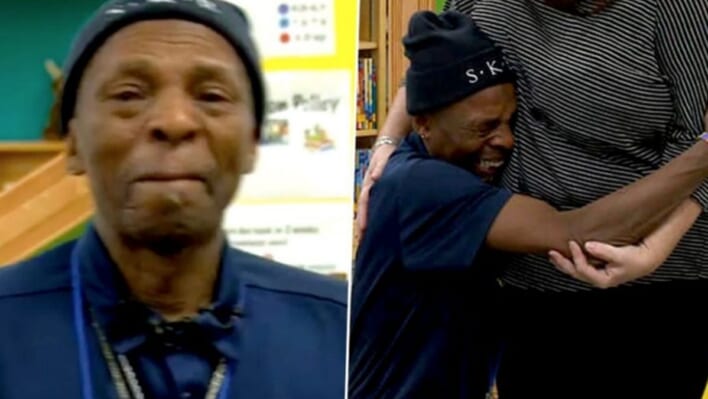 Faculty set up a GoFund Me campaign to help the beloved janitor. In less than 24 hours, it had raked in thousands of dollars.
By Heidi Hamm    November 19, 2022

Faculty set up a GoFund Me campaign to help the beloved janitor. In less than 24 hours, it had raked in thousands of dollars.

Every day, Robert Reed, like millions of others, commutes to and from work. However, his commute is substantially longer than most. While the average person commutes up to an hour each day, Reed logs an agonizing FOUR HOURS. One way.

Or, he used to. But now, thanks to the kindness of his coworkers, his commute time is significantly less.

The 60-year-old is a janitor at Farmington Elementary School in Germantown, Tennessee. And to say he loves his job is an understatement.

“This building was built in 1975, so it takes a lot of work, but it’s a blessing to do the job,” Reed told WMC Action News 5. “I love these people up here. I love them. I couldn’t have made it without them. Yes, it’s a joy to work here. Joy. Pure joy.”

What wasn’t a joy? His commute.

However, Reed never complained. To him, the lengthy commute was worth it.

Without his own vehicle, Reed relied on a combination of public transit and his own two feet to get him to and from work. Three buses and two miles of walking later, he would arrive to put in a full day of physical labor before repeating the morning ritual all over again at the end of the day.

“Let’s say I get off at 3 p.m.,” said Reed. “Then I get home around 7 p.m. I stay at Millbranch and Winchester. I have to catch three buses and walk two miles.”

In an effort to help him out, faculty members would often drive him to the bus stop. But then they decided to go one step further and give him a “lift” he wasn’t expecting.

Faculty Sets up GoFundMe to Help the Janitor Buy a Truck

Reed had only been on the job four months but he was already considered family. Beloved by faculty and students alike, his positive attitude and exemplary work ethic didn’t go unnoticed.

Neither did his commute.

Knowing that Reed was trying to save up money to buy a truck, faculty decided to pitch in and see if they could help make it happen. And boy, did they deliver.

Elizabeth Malone, a first-grade teacher at Farmington Elementary, set up a GoFundMe campaign with a target of $10,000.

The GoFundMe described Reed as a hard worker who “LOOKS for jobs to do around the school after he has completed his daily tasks,” and “always has a smile on his face.” It went on to say that he “adds a little sunshine to our school with his smile and his exemplary work ethic.”

In less than 24 hours, thanks to the generosity of staff and parents, it had already reached $7,000.

Just one day after starting the GoFundMe, Malone and the staff shared the good news with Reed, telling him: “We started a GoFundMe for you 21 hours ago. We’ve raised $7,000 for you to buy a new truck!”

Reed, overcome with emotion, dropped to his knees, crying. Once he got back up on his feet he hugged Malone tight.

But the good news doesn’t stop there. By the time the campaign was over, the fund had reached a whopping $49,645.

Reed got his new truck — a 2019 red Chevy Silverado. And not only did his new truck give him the gift of more time, but he put that extra time to good use.

Now, he’s running his very own landscaping business on the side (with a little bit of help from his local community.) After hearing about his story, a number of local businesses came together to offer him the equipment he needed.

Malone believes that Reed got exactly what he deserves. And she hopes that the 600 students at Farmington Elementary School learned a valuable lesson or two along the way.

Not only does Reed’s story prove that hard work really does pay off but it’s also a powerful reminder to help out others when you can.