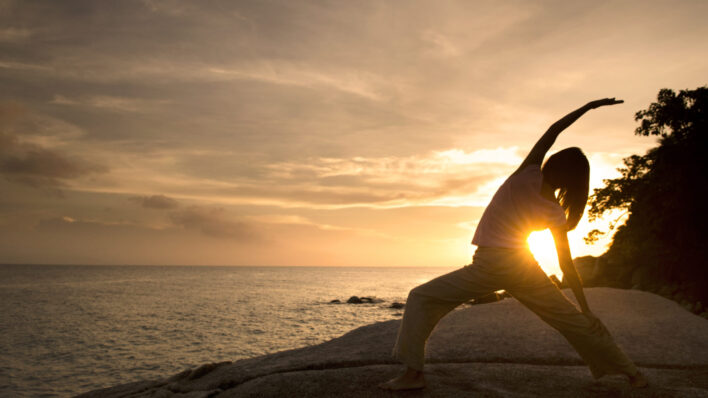 The Science Behind Why Yoga Makes You Feel Amazing

Stress seems to be the one thing uniting everyone in this day and age. However, if there is one way
By Sarah Jones    July 13, 2017

Stress seems to be the one thing uniting everyone in this day and age. However, if there is one way

Stress seems to be the one thing uniting everyone in this day and age. However, if there is one way we can combat the waves of anxiety, it’s through the practice of yoga. Yoga has multiple benefits, such as improving health, aiding with blood circulation, enabling better focus, increasing sleep quality, and helping people become more peaceful in their day-to-day lives. The Science Behind Why Yoga Makes You Feel Amazing

Yoga is not a work-out, it is a work-in. And this is the point of spiritual practice; to make us teachable; to open up our hearts and focus our awareness so that we can know what we already know and be who we already are.

It helps you battle the blues

Researchers at the Boston University Medical School found that people who practice yoga regularly had higher levels of the amino acid GABA. People who suffer from depression and anxiety have very low levels of these amino acids in their bodies. When I read this, it gave me an extra reason to move into a tree pose.

In addition, it was also surmised that GABA production from yoga was greater than what’s produced when walking, so maybe we should forget the trainers and pick up the yoga pants trend instead.

Most of the time we use wine to try to aid our GABA levels, but the researchers also found that by consistently practicing yoga, a more stable, permanent level of GABA within the brain could be achieved

Yoga has also been found to reduce the level of cortisol. When high levels of cortisol are secreted within the bloodstream, stress levels rise and there is a higher propensity for depression. These researchers recommended the use of yoga for its abilities to act as an anti-depressant on its own and to further boost the power of actual medication.

So if you are currently considering therapy, might I suggest yoga instead? In a recent study by the University of Minnesota, there was found to be no real difference between the results of yoga and cognitive behavioral therapy on depression sufferers. And at least with yoga, you get the added benefit of being able to take stunning pictures at sunrise in your newly learned poses. Like this one, for instance. It cultivates calm and self-reflection

Yoga enables us to enter a state of deep calm and reflection, otherwise absent in the maddening world of the urban jungles we now call home. More and more people are realizing the importance of embracing time alone and treating and regenerating yourself — and don’t we all love some me-time? Perhaps best of all about yoga is that it not only works for you physically, but it helps you mentally as well.

Yoga facilitates greater self-awareness through teaching you how to control your breathing, thus making you more aware of your surroundings, your body, your actions and most importantly, your mind. By being able to focus on our breath and our breathing techniques, we are better able to be present, calm and fully engaged in the daily hustle and bustle of life.

It teaches you mindfulness

Mindfulness meditation, a concept whereby people train themselves to be more present in the moment instead of engaging in the modern-day practise of having ten thousand engines running at once, is actually life-changing.

We’re learning more and more today about the powerful effects of meditation and mindfulness for brain health. Dr. Carmody and partners discovered that practising mindfulness meditation leads to positive changes within the structures of the brain. Mindfulness meditation is simple to practice, and it will teach you to acknowledge the thoughts, feelings, and desires you are having with no judgment. This has been shown to allow people to have more constructive responses to negative stimuli.

Yoga is no longer the property of hippies and those seeking to separate from society. Science is proving its powerful health effects, and it is being recommended by doctors and psychologists in order to make the world a healthier and happier place.

Yoga is even being combined with martial arts, boxing, and ballet to ensure an adrenaline-pumping workout for all who are interested. There’s a yoga for everyone.

So, go on and get into that cat pose already.

Sarah is the writer of Relax Everyday. She believes that a healthy lifestyle starts with a relaxed and healthy mind and body.