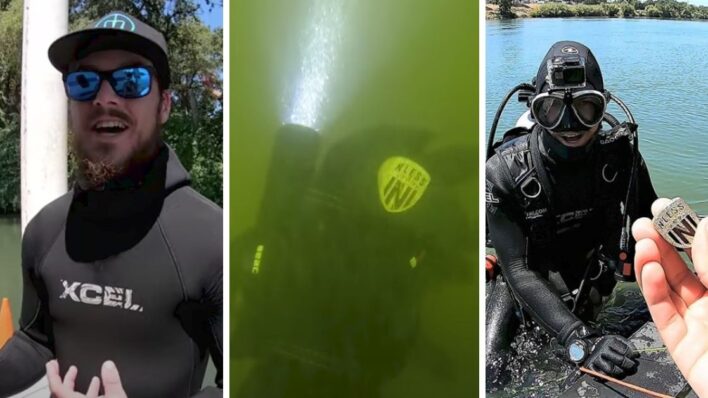 Scuba Diver Found Lost Ring Worth $17,000–And Returned It To Its Owner

Mike Pelley is a professional diver who has been approached by Bill Fitty to find a lost, precious ring that belonged to his late brother.
By Kawter    July 6, 2020

Mike Pelley is a professional diver who has been approached by Bill Fitty to find a lost, precious ring that belonged to his late brother.

Mike Pelley is known as “Merman Mike” for a reason. He dedicates a good portion of his time to exploring Northern California’s waterways, searching for longtime lost treasures and cleaning the trash from the waterbeds.

In fact, Mike has a treasure room full of items he has collected along the way–computers, phones, toys and even a wallet complete with credit cards.

But lately, Mike has been on a mission: finding a precious ring that meant a lot to someone.

“We’re trying to find a valuable and precious ring that was given to me by my brother who passed away,” Bill Fitty said on Mike’s Youtube channel.

We just need that ring back today, and we came to the merman to see if he could come through for us.

Mike accepted the mission but it was no easy feat. The first dive was unsuccessful, as the current in the river had made the task very arduous. So Mike regrouped and with the help of his girlfriend, dropped a brick in the location where the ring was supposedly lost so he knew where to look.

This time, it worked.

He emerged with the ring

When Mike came back to the surface, he had the ring in his hand. Bill was so touched that he offered to give him a $1500 so Mike could get himself metal detectors for his future dives.

I’m like getting choked up talking about it. Doing this has brought back the good in humanity in me because everyone I talk to is always so grateful and happy.

Mike mentions that he always tries to return the valuables to the original owner, even if it is not always easy.

Also, I always try my best to return anything I find to the original owner.

His next mission? Finding two wedding rings with the help of better equipment this time.

You can always do your part

Mike’s passion for diving has also taken an altruistic turn. Since he knows he has the skills to go on these dives–and he wants people to know that they shouldn’t try it for themselves–he can reunite people with previous belongings they never thought they would see again.

To an extent, we all have the power to make a difference in someone’s life simply by doing the things we’re already good at.