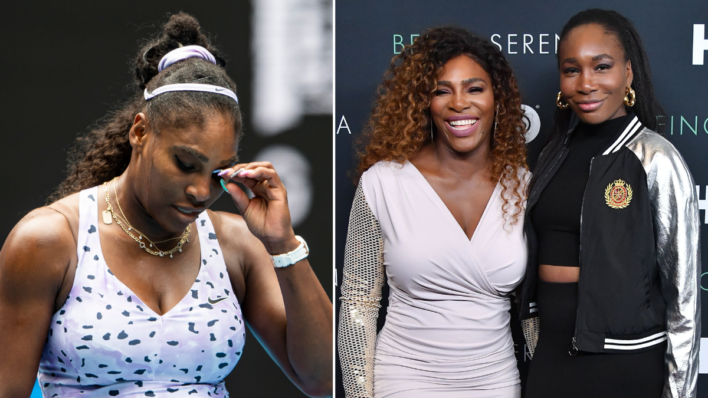 Serena Williams Had To Survive Being Compared to Her “Thinner” Sister

“It wasn’t very easy — growing up. Venus was like a model. I was thicker. I didn’t really know how to deal with it,” says Serena Williams
By Shaoni Das    August 25, 2021

“It wasn’t very easy — growing up. Venus was like a model. I was thicker. I didn’t really know how to deal with it,” says Serena Williams

You could be the most skilled, resilient, and celebrated athlete of your generation, yet your insecurities will still find a way through.

Enough can’t be said about Serena Williams and her tour-de-force capabilities on the tennis court. She’s a sheer master in her field, a fearless, dominant presence who has been seamlessly triumphing over her competitors for twenty years straight. She has earned more accolades than most of her peers combined, and at 39, she is as adept as ever, not showing the slightest sign of slowing down.

The Venus sisters, in general, aren’t just recognized for their athletic abilities; they essentially paved the way for Black women in tennis, if not all manners of sport. From an outsider’s perspective, they’re blessed with ample talent, beauty, and charisma. Why would they ever feel the need to cry over something?

Well, just because they exude unflinching confidence in public doesn’t mean they don’t suffer from self-doubt in private. In the case of Serena Williams, her most significant cause of insecurity happened to be her own sister. Here’s how she overcame the issue:

In an interview with The Huffington Post, Serena opened up about being compared to her older sister, Venus, for as long as she could remember. It became particularly grating as they hit their teenage years, and their bodies started rapidly developing into what nature had intended. Venus’s body turned out to be the classically “conventional” type, whereas Serena’s skewed toward broader and more muscular.

This is, of course, nothing to be ashamed about. Serena’s illustrious career depends on the athleticism and strength of her body; it has powered her through countless challenges, injuries, and exhaustion over the last twenty-five years. In a perfect world, she shouldn’t have to feel guilty in the least about her shape. However, our society is dictated by rigid aesthetic standards that weigh down upon the most self-assured of women. Therefore, you get a culture where Serena is shamed for the same physical attributes that men actively strive to attain.

It wasn’t very easy — growing up. Venus was like a model. I was thicker […] Most women athletes are pretty thin. I didn’t really know how to deal with it.

Serena’s anxiety stemmed from being consistently compared to Venus throughout childhood and well into their adult lives. “Venus looked more like what is really acceptable: she has incredibly long legs, she’s really, really thin,” the mother-of-one told British Vogue. She felt Venus was superior in some way or the other for being “skinny” and for closely resembling the ideal body structure, i.e., skinny or petite. At the time, women athletes in most arenas were prized for their slender figures, which supposedly indicated their prowess and flexibility. It just wasn’t the norm to see a woman with Serena’s sturdy form, and so when the audience caught sight of her, they didn’t miss a beat in verbally abusing her.

Fortunately, with time and a fair bit of hard work, Serena learned how to value her body for what it is and for how it continues to nourish her both physically and emotionally. She had to “come to terms” with her natural profile, “as every teen and young adult does,” she said.

As a young girl aspiring to find her footing in a demanding environment, she had to go above and beyond to find body images that represented her. It wasn’t something “celebrated” before the public, so the search wasn’t a walk in the park. Eventually, she realized it’s futile to stress over a body that’s delivered time and again in her path to worldwide success. Along the way, she managed to find women who approached their brawny appearance with pride and love. Additionally, body positivity is gaining momentum across the public consciousness, and Serena’s curvier shape is becoming the ideal in certain circles. “My body type is in style now, so I’m loving it!” the tennis champion said.

How amazing that my body has been able to give me the career that I’ve had, and I’m really thankful for it. I only wish I had been thankful sooner.

As for Venus Williams, it’s not entirely her fault she’d inadvertently damped her sister’s spirits with her body. They are sisters, and some element of rivalry and childish resentment is always going to exist in their dynamic. The situation becomes all the more dramatic when it’s two of the greatest female tennis players routinely playing against each other in prestigious competitions – the competitiveness is inevitable. However, Venus and Serena’s long and storied professional rivalry has never involved either of their body types. That’s something that the public has concocted all by themselves.

In fact, Venus, being a year older than Serena, has always been seen as the more responsible one. She’s had to lay the groundwork for Serena’s ascendancy in tennis, and she’s also been the one to look out for her younger sister when the going gets tough.

I always want the best for Serena. As the older sister who took care of her, I still look out for Serena on the court—yet I’m trying to get the win myself.

In the March 2003 issue of O, The Oprah Magazine, Venus described their bond as “strong” and “close.” They know how to take care of each other while keeping their eye on the ball. “We still tease our mom because she didn’t allow us not to get along,” said Venus, adding that their family played a significant role in empowering them to support each other through all the ups and downs. Furthermore, Venus says the family makes it a point to keep out jealousy and continue fuelling each other’s journey through love, respect, and endless encouragement. She told Shape, “sometimes in families, it can tear people apart when one person is more successful…it hasn’t been like that in our family at all, no matter who won or lost or who was in the spotlight or not.”

Your insecurities are a rite of passage

Insecurity and self-doubt is an inherent part of the human existence. It’s going to find a way to creep in at every turn, and it’ll be up to you to see the forest for the trees and determine how you’d like to move forward. In Serena’s case, she has to undertake a lengthy emotional voyage to accept her body and be “thankful” for what it has provided her over the years. The source of her misgivings was her own sister, yet she didn’t let the insecurity turn into animosity.

She understood it’s a rite of passage for everyone. Everyone has to go through the ordeal of coming to grips with something they deem ‘undesirable’ about themselves, be it their body, background, or economic status. All you can do is dedicate your energy to your purpose and trust that the insecurities will dissolve at their own pace.