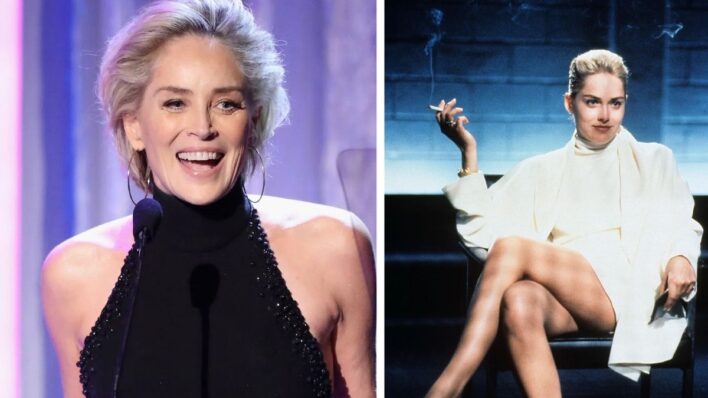 Many remember Sharon Stone’s iconic scene of crossing and uncrossing her legs, revealing no underwear beneath – but now the
By Aly Walansky    March 30, 2021

Many remember Sharon Stone’s iconic scene of crossing and uncrossing her legs, revealing no underwear beneath – but now the actress reveals the shocking truth behind that infamous scene, and the movie itself.

Sharon Stone recently wrote an autobiography, “The Beauty of Living Twice,” and shared the story behind the scene that shocked the world.

“After we shot ‘Basic Instinct,’ I got called in to see it. Not on my own with the director, as one would anticipate, given the situation that has given us all pause, so to speak, but with a room full of agents and lawyers, most of whom had nothing to do with the project. That was how I saw my vagina-shot for the first time, long after I’d been told, ‘We can’t see anything—I just need you to remove your panties, as the white is reflecting the light, so we know you have panties on.’ Yes, there have been many points of view on this topic, but since I’m the one with the vagina in question, let me say: The other points of view are bullshit.

Now, here is the issue. It didn’t matter anymore. It was me and my parts up there. I had decisions to make. I went to the projection booth, slapped Paul across the face, left, went to my car, and called my lawyer, Marty Singer. Marty told me that they could not release this film as it was. That I could get an injunction. First, at that time, this would give the film an X rating. Remember, this was 1992, not now, when we see erect penises on Netflix. And, Marty said, per the Screen Actors Guild, my union, it wasn’t legal to shoot up my dress in this fashion. Whew, I thought.”

But Stone’s role in the movie meant a lot to her, and she didn’t want the movie to fall apart, so she ultimately decided to allow the scene to stay in the movie. Even though the scene had nothing to do with the actual movie plot, and was something she had not consented to — which goes against union rules.

She went on in her book:

“Well, that was my first thought,” she wrote. “Then I thought some more. What if I were the director? What if I had gotten that shot? What if I had gotten it on purpose? Or by accident? What if it just existed? That was a lot to think about. I knew what film I was doing. For heaven’s sake, I fought for that part, and all that time, only this director had stood up for me. I had to find some way to become objective. I had spent so long coming to the project that I had fully examined the character and the dangerousness of the part. I came to work ready to play Catherine Tramell. Now I was being challenged again.”

But that wasn’t the only invasive, demeaning thing that Stone went through on the set of ‘Basic Instinct.’

“I had actor approval in my contract. No one cared. They cast who they wanted. To my dismay, sometimes. To the detriment of the picture, sometimes. I had a producer bring me to his office, where he had malted milk balls in a little milk-carton-type container under his arm with the spout open. He walked back and forth in his office with the balls falling out of the spout and rolling all over the wood floor as he explained to me why I should fuck my costar so that we could have onscreen chemistry. Why, in his day, he made love to Ava Gardner onscreen and it was so sensational! Now just the creepy thought of him in the same room with Ava Gardner gave me pause. Then I realized that she also had to put up with him and pretend that he was in any way interesting.

I watched the chocolate balls rolling around, thinking, You guys insisted on this actor when he couldn’t get one whole scene out in the test.… Now you think if I fuck him, he will become a fine actor? Nobody’s that good in bed. I felt they could have just hired a costar with talent, someone who could deliver a scene and remember his lines. I also felt they could fuck him themselves and leave me out of it. It was my job to act and I said so.

This was not a popular response. I was considered difficult.

Naturally I didn’t you-know-what my costar; he was baffled enough without me confusing him some more. But he did make a few haphazard passes at me in the upcoming weeks, I’m sure spurred on by this genius.

I’ve had other producers on other films just come to my trailer and ask, ‘So, are you going to fuck him, or aren’t you? … You know it would go better if you did.’ I take my time and explain that I am like the nice girl they grew up with, and get them to recall that girl’s name. This leaves us all with a little bit of our dignity.”

In the end, this movie that was supposed to be about female empowerment made the woman starring in it feel powerless, and that lack of power was perpetuated by Stone admittedly letting the situation slide, despite how it made her feel.

That scene may be the most infamous in the movie, and maybe one of the most talked-about scenes in any movie, ever – but now it’s a constant reminder of how Hollywood, and the world, treats women. It is also a reminder of the kind of treatment women have come to accept in order to protect their job and livelihood.

We need to work harder to make sure that this kind of abuse doesn’t happen to more women. But by speaking up now, Stone is causing a positive ripple effect towards creating safe conditions for women in Hollywood.