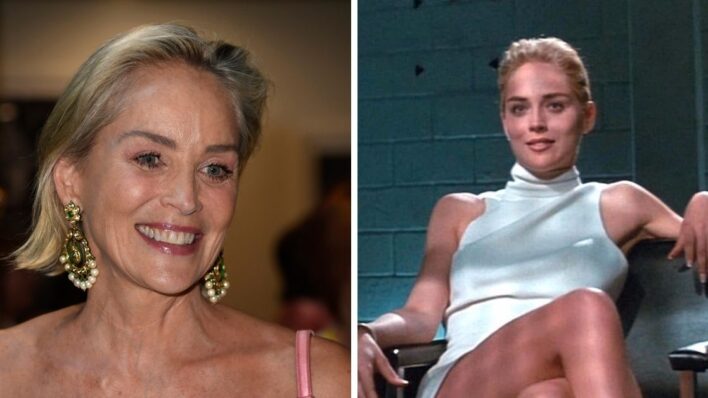 Once a sex symbol, Sharon Stone’s dating life in her 60s reveals the struggles of finding love as an older woman in a world obsessed with youth and ruled by double standards.
By Maya Khamala    September 16, 2020

Once a sex symbol, Sharon Stone’s dating life in her 60s reveals the struggles of finding love as an older woman in a world obsessed with youth and ruled by double standards.

I know I’m far from the only one who hears the name Sharon Stone and immediately thinks of her iconic but controversial scene in Basic Instinct(1992). Truth is, Sharon has never been able to move past what became known as the controversial leg-uncrossing scene in which she plays Catherine Tramell, a murder suspect who shows a room full of male officers who’s really the boss.

That was the film that launched Sharon’s status as a sex symbol and helped her rise to international recognition. But what about her real life? Or her real-life love life?

The broad strokes of Sharon’s on-record love life are as follows: she met and married TV producer Michael Greenburg in 1984. They divorced in 1990. In the years that followed, she became engaged to a couple of other men but the engagements were ultimately short-lived.

Then, in 1998, she married Phil Bronstein, executive editor of two major San Francisco newspapers. They divorced in 2004. She currently lives with her three adopted sons—all of them now teenagers. Today, Stone is a single, sixty-something mom back on the dating scene.

Perhaps the most miraculous thing about Sharon today is not the fact that she’s been trying online dating—much like the rest of us commoners—but that being a famous star and an immortalized sex symbol doesn’t win her any special privileges in the dating world.

Let this be a lesson to all who believe that money and fame can somehow curry favors with Cupid. Plus, as most women know, aging doesn’t help. It doesn’t matter how little one subscribes to mainstream concepts of sex appeal—there still exists a palpable downturn of sexual attention as one ages. This is a phenomenon that aging men simply do not deal with in the same way, what with their tendency to date younger partners, particularly in the celeb world. Think cougar vs. silver fox. The latter usually comes out on the winning end.

Most recently, the star’s presence on the popular dating app Bumble received widespread attention when she tweeted that her legit account had been flagged as fake! “I went on the @bumble dating sight [sic] and they closed my account. Some users reported that it couldn’t possibly be me! Hey @bumble, is being me exclusionary? Don’t shut me out of the hive,” she wrote.

Of course, Bumble have since made up for their blunder, having now unblocked Sharon’s account. “Trust us, we *definitely* want you on the Hive,” said Bumble’s editorial director Clare O’Connor. “Hope you find your honey,” she added. Sharon has since come to the conclusion that several men she turned down were responsible for getting her account blocked.

Unsurprisingly, after posting her tweet, she was bombarded with offers for dates. But, as any woman who’s ever dated online knows, quantity is most certainly not quality. One post read: “If you’re ever in Buffalo and kinda dig fat guys with mustaches my DMs are open. Also own a car so willing to drive (up to 25 miles) even if ya just close by.”

Nonetheless, Sharon has remained positive—honorably so, far as I’m concerned. She has revealed that she’s getting to meet guys she’d never meet in real life, while joking that she has the ‘worst luck’ with men, having chatted with all kinds, from former convicts, to ‘socially awkward’ people, and those who prefer their dog’s company to humans.

“You know, when you’re single at this age, there’s usually a reason for that. I count myself in there,” she said. Maybe, Sharon, but self-awareness and a sense of humor are major assets in my book!

But regardless of Sharon’s overall positive attitude, her general online dating experience simply hasn’t been great, and she’s made that known. “Honestly, the whole thing was so dismal that I now want to write a book of short stories about my online dating experiences. Dating sites are just not a successful thing. Because real chemistry, that frisson, that happens in the air – not on a site. And people are becoming less socially adept because of those sites.”

They no longer know how to behave over dinner, be in a relationship, or communicate. I don’t want a ‘text relationship’ with someone I’m actually dating, for example. I find that dismal.

Sharon’s Bumble fumble is not the first time she has spoken publicly about dating. In 2014, she said she was “available for dating,” and a few years later on the Late Late Show she told host James Corden and fellow guest Elton John what she was looking for in a man.

“I like them tall,” she said. Almost unbelievably, her ability to find herself a man has not been fruitful. And really, how is this not relatable? The reality is, it doesn’t matter how gorgeous or accomplished a woman may be—not one of us is immune to disappointment in the dating world, especially as we get older and wiser.

She got a taste of Hollywood-brand misogyny

Stone has opened up about her early days in film, describing how she struggled to get cast before she posed for Playboy in an effort to get lead female roles. Then came Basic Instinct of course, but successful as it was, it’s dominated her life ever since. When asked if she thought #MeToo had triggered any real changes in the film industry, she responded, “When I started as a model and actress, the term ‘fuckable’ was equated with workable and camera. It was a pretty misogynistic era twenty years ago. Mel Gibson, who is three years older than me, thought I was too old to star opposite him.”

Sharon has also described the personal struggles she went through after she had a stroke in 2001, at 43. It disrupted both her career and her marriage, forcing her to spend years learning to speak and see properly again. On learning to accept her (aging) self again, Sharon said,

There was a point in my forties when I went into the bathroom with a bottle of wine, locked the door, and said, ‘I won’t get out until I can fully accept my body.’

But Sharon saw that as an opportunity to completely challenge how she sees herself, and do away with societal expectations that are imposed on aging women.

“You don’t even realize how much [looks] matter until they start to go,” Sharon said. “It’s a big, fat stupid lie if anyone says that they don’t. I’m done letting other people tell me how my face and body are, for one thing…and those big cellulite closeups. All women’s bodies have those kinds of things.

You don’t have to stay a beautiful girl forever, and we really have to start dealing with the fact that it’s cool to be a grown-up and intelligent woman.

Being (really) good without a partner

In 2018, Stone dated Italian real estate agent Angelo Boffa, but they separated, with Stone saying later that year: “I think somewhere in the back of your mind you think maybe one day you won’t be a single parent, then, eventually you realize: I think it’s better. I’m no longer hoping for someone.”

Personally, I totally dig Stone’s unapologetic and unpretentious way of putting herself out there as an aging woman—both in a Hollywood context and a planet earth context (since both come with challenges).

And I feel her sentiment fully: just a couple years ago I reached a place where I was no longer hoping for a romantic partner—I genuinely felt that I’d be better off alone. And then, lo and behold, a surprisingly great partner crossed my path. So I know in my heart that if Sharon Stone’s even a little open to it, it’s never ever too late to find a suitable partner in crime. And if it doesn’t happen, life is still a many-splendored thing.