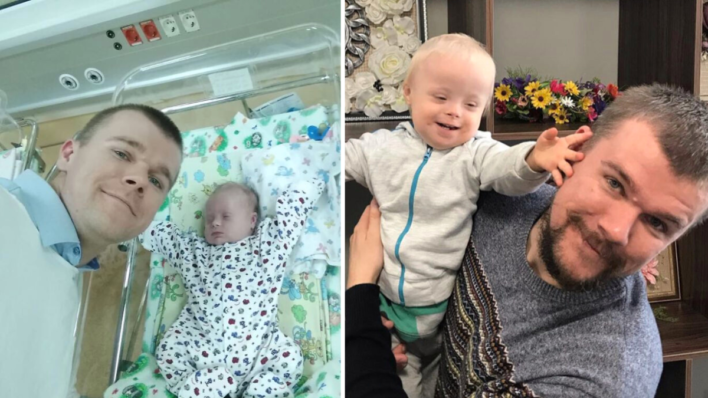 Mom Rejects Son With Down Syndrome and Wants to Leave Him at an Orphanage – So, His Father Does This

After finding out that his child had Down syndrome, one father was presented with a difficult choice.
By Lindsey Staub    October 18, 2022

After finding out that his child had Down syndrome, one father was presented with a difficult choice.

Evgeny Anisimov and his wife had only one minute and 39 seconds to celebrate the arrival of their first son before the doctors broke life-changing news to the couple.

Their baby boy was born with an extra copy of chromosome 21, resulting in Down syndrome.

“I fear that your baby has Down syndrome,” Evgeny remembers the doctor saying.

How One Father Reacted to His Son Having Down Syndrome

Caught completely by surprise, Evgeny got emotional. He cried over the obstacles his child would need to overcome as a person with a disability, but he knew that the diagnosis could never change his love or devotion he felt toward his son.

Despite his continued commitment to his child, his wife and her family did not feel the same way. The mother no longer wanted the child and her parents recommended that they leave the boy at an orphanage.

RELATED: Single Man Fights To Adopt Abandoned Baby With Down Syndrome And Hole In Heart

“Let the state take care of him,” Evgeny remembers his father-in-law saying. “And you will still give birth to a healthy one, and your life will be joyful, not in sorrow.”

Evgeny stuck by his decision.

Even though he was surrounded by people ready to give up on the boy, Evgeny refused to. “At no time did I think of leaving my son in an orphanage,” he said. “That would be inhumane.”

Evgeny was presented with a difficult choice: his son or his wife. Evgeny chose to keep his child, even though that meant raising him alone.

In spite of having a healthy marriage before, the couple separated due to Evgeny’s choice to keep their son. Even so, Evgeny harbors no ill-will toward his ex-wife.

RELATED: Single Dad Adopts Baby Girl With Down Syndrome Who Was Rejected By 20 Families

“Now I understand that she was just scared at the time,” he said. “She started to act according to the wrong scenario.”

He named his little boy Mishka and began devoting his whole life to him. Even though it meant giving up his career, Evgeny stuck by his decision to father Mishka.

“I had a good job in Moscow and this was a big turning point in my career, but I couldn’t leave my son,” he said. “He needed love and warmth.”

How One Dad Proved the Importance of Being Inclusive

None of the obstacles stopped Evgeny from giving his son all the love he deserves. “When a child is born, he asks the outside world: ‘Am I needed here or not?’ And I answer with certainty: ‘Son, you are needed!’” Evgeny said.

Evgeny now lives as a single father, dedicating his time to helping his son develop physically and mentally. He shares his story with the world in order to raise awareness about Down syndrome.

RELATED: “I Was Raised by a Father With Down Syndrome” – Student Dentist Celebrates Dad by Destroying Stereotypes

“I also want to support, inspire with my example those people who are or will be in the same situation as me,” Evgeny said. “Have no fear! Everything will be fine!”

Though the path was going to be more difficult with disabled son, it was one worth walking. Evgeny did not write off his child just because of a genetic difference — he embraced him instead. Now, his love for his son inspires others to accept people with differences instead of ignoring them.

Doctors Wanted to Put Baby with Down Syndrome in an Institution – 15 Years Later, She Proves Them Wrong