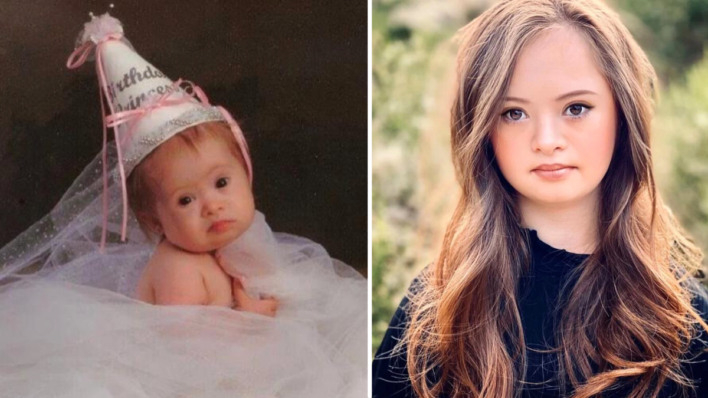 Doctors Wanted to Put Baby with Down Syndrome in an Institution – 15 Years Later, She Proves Them Wrong

One teen with Down syndrome proved everyone wrong 15 years after her mother was told to put her up for adoption.
By Sophie Tolias    May 30, 2022

One teen with Down syndrome proved everyone wrong 15 years after her mother was told to put her up for adoption.

When 15-year-old Kennedy Garcia was born with Down syndrome, doctors said she wouldn’t have a good quality of life. They predicted she’d be wearing diapers as an adult and told her mother she would be better off in an institution. One even suggested she be put up for adoption.

But her mother, Renee, refused to give up her child.

How a Baby with Down Syndrome Defied the Doctors

Fifteen years later, the teen who has competed in state-wide dance competitions, models for top brands, and attended prom with her boyfriend, has proved them all ignorant.

“The night Kennedy arrived, I was heartbroken to learn she had the condition because I was being fed nothing but a negative, bleak picture painted by doctors and nurses who really had no idea what my child‘s future really held,” Renee said.

It was only the next night when a kind midwife told me Kennedy was beautiful and just like her daughter, who also had the condition, that I felt a glimmer of hope.

The first thing Renee asked the midwife was if her daughter could walk. “She just laughed. Her daughter was 16 and of course she could walk,” Renee said.

The now mom-of-four listened to the midwife talk about her daughter and realized the girl sounded just like other teens.

RELATED: Dad Gets Shamed For Video Of Daughter With Down Syndrome – Then, An Amazing Thing Happens

But Kennedy’s struggles weren’t over. After recovering from leukemia, she had to have surgery that could have left her paralyzed because her cervical spine was separating from the base of her skull.

While wearing a metal frame screwed to her skull for six months during recovery, Kennedy entertained herself by watching dance videos. And when she was well enough, she started taking dance classes herself.

“She was absolutely in her element, and we haven’t looked back since,” Renee said.

How a 15-Year-Old with Down Syndrome Proved Everyone Wrong

Kennedy went on to take up modelling and acting. She goes to New York and LA for auditions and has modeled for American Girl, Justice Clothing, Zulily and Aetna, and has appeared on the hit show This Is Us and on a nation-wide US census TV commercial.

“Kennedy is like most girls her age. She has a posse of friends who adore her, she loves to dance, sing and experiment with her hair and makeup. She goes to the cinema with her brother and their friends and sometimes breaks the rules,” Renee said.

She has a devoted boyfriend, Matthew, an artist and actor who also has a genetic condition, and she is close to all three of her siblings.

Renee says she’s in awe of her daughter.

This was the same child doctors told me needed to be put in an institution. It’s shocking how misinformed they all were, and it was only 15 years ago. I feel sad that I wasted time grieving for moments like prom dress shopping as I really had been led to believe none of the normal milestones would be reached.

On Kennedy’s first birthday, Renee returned to the hospital where she was born, and left a care package for new moms of babies with Down syndrome with positive books that helped Renee understand what the chromosome disorder meant for her child, as well as onesies with slogans celebrating their unique babies.

“I left my contact details there and begged the midwives to pass my card on to new mothers of children like Kennedy,” she said. “Many reached out to me over the years because of that basket and I hope having a positive conversation with me and hearing everything Kennedy has achieved, saved those moms from the unnecessary trauma and anguish I went through.”

How a Mother-Daughter Duo Are Shattering Stereotypes about Down Syndrome

Now, Renee and Kennedy give informative talks at schools, teaching students what Down syndrome is and how they can support classmates, friends or relatives with the condition.

For years, Renee used to be the one giving the talk. “But now Kennedy is the one telling her story and talking about her life,” she said. “She has a power-point presentation she likes to use and she always speaks with such truth, clarity and confidence.”

“We’re all incredibly proud of her and everything she has achieved,” Renee continued. “She’s a wonderful girl and we are all so lucky to have her in our lives.”

The mother and daughter duo are not only inspirations for families with kids that have Down syndrome, they’re spreading awareness and education to fight the stigma and the lack of support Renee received, as well as changing the game for inclusive representation.