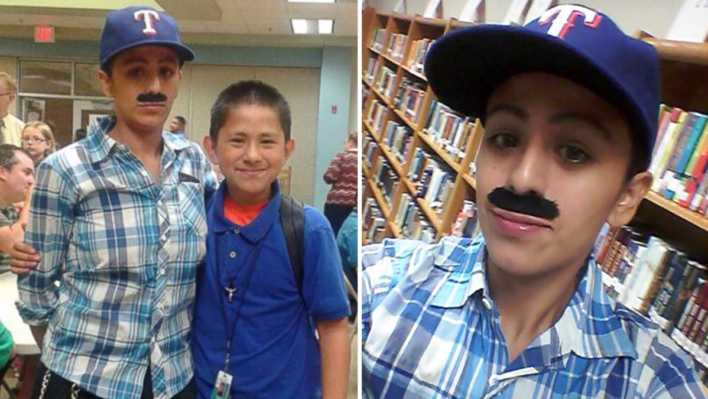 “I wasn’t about to let him miss out.”

As soon as a single mom from Fort Worth, Texas pulled into her son’s school during morning dropoff, she knew it wasn’t an ordinary day. Yevette Vasquez noticed that there were several more cars in the parking lot than usual. That’s when she found out that it was “Donuts With Dad” day.

Her sixth-grade son, Elijah, hadn’t bothered to mention it, thinking there was no point. After all, it was a day meant for dads.

“I asked him, ‘What’s going on? Is there some event that I’m supposed to be here for?’ and he tells me, ‘No, don’t worry. It’s just Donuts With Dad,'” Vasquez told ABC News. “I told him, ‘How come you didn’t tell me?’ and joked I could’ve dressed up as a man for him.”

Elijah jokingly responded, “You got ten minutes until the bell rings.” Turns out, she only needed seven.

The Single Mom Decided to Dress for the Part

The mother-son duo quickly raced back home to round up the perfect dad outfit — complete with a baseball cap, plaid shirt, baggy pants, wallet chain, fake mustache, and a dash of cologne for good measure.

They made it back to school with moments to spare.

Not knowing what to expect, Vasquez said the reaction to her mom-turned-dad costume turned out to be a pleasant surprise.

As for Elijah? He LOVED it.

Why the Single Mom of 3 Boys Donned the Dad Costume

Vasquez told CNN that she just wanted to have fun with her son and that there had been other times when Elijah missed out on a school activity that involved dads.

“I saw that same, sad look on his face, and I didn’t want that,” she said. “I wish I would have done it sooner.”

She plans on doing the same for her two younger sons when their “Donuts with Dad” day comes.

RELATED: Single Dad Breaks Down On Valentine’s Date With Daughter After Being Handed A Note By Waitress

After the event, Vasquez shared the story with accompanying pictures on a public Facebook post where it quickly went viral.

In the caption, she explained that she “wasn’t about to let him miss out.” She continued, “I know seeing other dads with their kids isn’t easy for mine but it’s life, at least I can do whatever it takes to put a smile on that face, so here it goes…..”

She definitely did what she set out to do.

However, not only did she put a smile on Elijah’s face, but she also sent an important message to other single parents and their kids — “I want my children and other children of single parents to know that they are whole, complete, and limitless even without the other parent there.”

For families that don’t fit the traditional two-parent mold – school events like Donuts With Dads can be isolating. Between 1/4 and 1/3 of all kids grow up in a fatherless home. In the United States alone, that’s 20 million kids. So when “special” days come up at school there are inevitably some kids who miss out.

But they shouldn’t have to.

Vasquez doesn’t blame the school though. “I know some people are saying that they shouldn’t have a specific Donuts With Dad day because kids without parents feel left out, and I do get that,” she said. “But I feel they don’t have to take the day away. I think it’s nice the school celebrates fathers who are there for their children, and they also have a day with moms, Muffins With Mom.”

Vasquez’s creative solution to her son not having a dad in his life is an inspiration and a reminder to all of us that families come in all different shapes and sizes. There is no “one size fits all.” And having one loving parent is more than enough.

Struggling Single Mom Gives All Lottery Winnings To Injured Cop – Gets $165,405 Reward For Her Selflessness