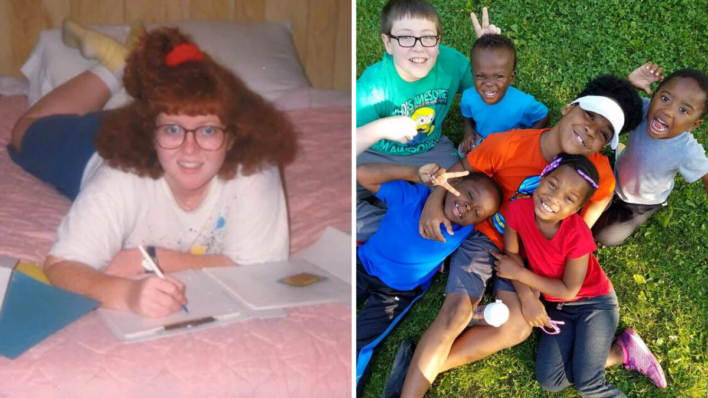 One single mom who grew up in foster care for years decides to give 6 young boys a forever home. The result is a sweet, heartwarming story for the ages.
By Joel Balsam    March 30, 2022

One single mom who grew up in foster care for years decides to give 6 young boys a forever home. The result is a sweet, heartwarming story for the ages.

While we might not hear as much about orphanages these days, there are still plenty of orphans. According to recent stats, there are more than 400,000 foster children in the US.

When Milwaukee’s Jessica Benzakein was 12, she became one of them. “My caseworker, his name was Ron, sat me and down and said, ‘Your mother has terminated her parental rights. What’s your plan B?’” Benzakein, now in her forties, told Today.

Benzakein’s caseworker put it bluntly: “He said, ‘If adoption is your plan A, you are too old,’” she recalled. “By 12, they figure you are deeply damaged and horribly troubled and there’s no reversing it. Between the ages of 2 and 5, your chances of adoption drop substantially.”

As predicted, Benzakein was never adopted and went through the foster care system until she turned 18. In college, she spent her Christmases alone, but now it doesn’t look like she will be spending any more holidays by herself.

Already having two biological children, Eli (14) and Brenna (9), Benzakein decided to foster children. She knew she could have used a good home when she was in the foster system, so she wanted to provide one.

“Good things don’t always happen in court,” said Judge Mark Sanders. “When they do they have to be applauded.”

How One Woman Proved People Can be Inherently Good

Speaking to news cameras, Benzakein said her kids have been more helpful to her than she is to them.

Everybody tells me how lucky these kids are and what a good thing I did. But … I’m going to cry … they grounded me. I went through my 20s thinking I didn’t really need a family. But I did. They give me purpose.

As of the end of the report, the family was living in a house Benzakein could have only dreamed of as a foster child. There’s a basketball net in the living room and every Friday is pizza and a movie night.

It could not have been easy to convince a judge that Benzakein can adopt six kids as a single mom – she must be a special woman. Her dedication to helping cut back on the US’ bloated foster system is admirable, and it’s a good reminder that there are wonderful people out there.

FAMILY IS WHAT TURNS A HOUSE INTO A HOME
“Family means nobody gets left behind or forgotten.” — David Ogden Stiers
Tags
Share
← Prev Post Next Post →