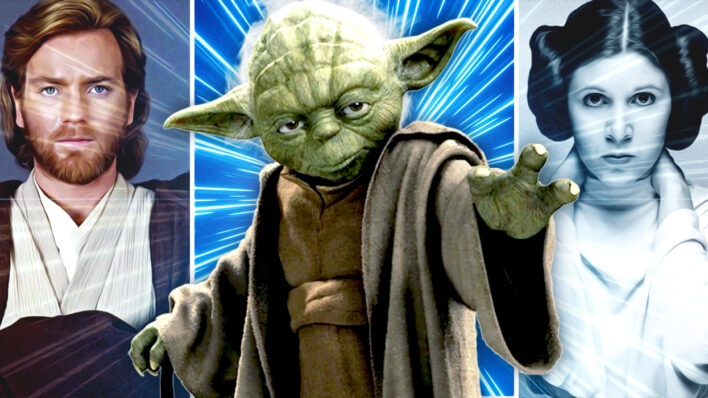 The Most Motivational Star Wars Quotes from a Galaxy Far, Far Away

Created by George Lucas, Star Wars is a multi-genre mythology that fundamentally changed the course of pop culture… forever. But what are the most inspirational lines in Star Wars history?
By Flavia Medrut    April 30, 2022

Created by George Lucas, Star Wars is a multi-genre mythology that fundamentally changed the course of pop culture… forever. But what are the most inspirational lines in Star Wars history?

With a rather strange idea in mind that didn’t really conform to Hollywood’s expectations in the ’70s, George Lucas was basically a penniless man with a story. It just so happened that his story — Star Wars — would change everything.

RELATED: Star Wars: How George Lucas Made The Movie Nobody Believed In

Although his idea was rejected repeatedly, Lucas continued to present his original concept until the head of 20th Century Fox, Alan Ladd Jr., agreed to invest in his potential. Ladd didn’t understand Lucas’ vision, but still decided to give him a try.

Decades later, comprising movies, TV series, comics, novels and video games, the Star Wars franchise has raked in over $70 billion dollars and has become a pillar of mainstream pop culture.

Handpicked from a story for generations, here are 10 of the most powerful Star Wars quotes:

Full Quote: “Fear is the path to the dark side. Fear leads to anger; anger leads to hate; hate leads to suffering.” – Yoda, Star Wars: The Phantom Menace

This quote instantly became memorable when it was featured in the trailer for The Phantom Menace, AKA Star Wars: Episode I. Delivered in Yoda’s captivating manner of speaking, these words also contain a basic truth.

In this line, Yoda evaluates a young Anakin for training and comes to the conclusion that the boy is afraid. He then tells him that fear will lead him to the dark side — and of course, he’s eventually proven right.

The dark side is a metaphor for a life path that is, if not outright evil, certainly more reactionary and self-centered, and as the Jedi Master says, it begins with fear . Out of fear comes frustration, anger and ultimately, bitterness, first at oneself, and then the world. Overcoming your fears is one of the hardest things to do, but you must try, or bring about multiple shades of suffering on you and everyone you know — just like Anakin Skywalker.

“Only you can change yourself.”

Full Quote: “An object cannot make you good or evil. The temptation of power, forbidden knowledge, even the desire to do good can lead some down that path. But only you can change yourself.” The Bendu, Star Wars: Rebels

This quote comes from Bendu, a wise and immensely powerful Force-wielding entity in the animated series, Star Wars: Rebels. This particular line is comeback to one of the series’ main characters, Kanan Jarrus, who said in reference to a Dark Side artifact, “It’s a Sith holocron, it’s a source of evil. My student’s been using it and I’m afraid it’s changing him.”

RELATED: What Happened to Hayden Christensen? The Dashing Star Wars Lead Who Disappeared

In truth, regardless of how superstitious we may be, objects don’t make us good or bad, even ones created by groups like he Sith! Wearing a cross around your neck doesn’t make you a good person, just as wearing a pentagram doesn’t make you an evil one.

An object cannot define our characters; our choices, beliefs and actions tell who we really are.

“Who’s the more foolish; the fool, or the fool who follows him?”

Obi-Wan Kenobi is the wise hermit who brings Luke Skywalker on a life-changing journey in the Star Wars story, and as such, has become one of the series’ most endearing and beloved characters. Not for nothing does he have his own Disney+ series, after all.

This quote, which comes from Episode IV: A New Hope, is a question that will make anyone think twice about falling to peer pressure — especially children, since they are even more susceptible to it.

Kids want to belong to different groups and they’ll do anything for that to happen. If their friends are doing something they know to be wrong, they could feel somehow obligated to join them. But if they are taught this simple, yet wise logic, they’d realize that following the fool who does wrong, makes them even more foolish.

“Train yourself to let go of everything you fear to lose.”

This piece of advice was imparted by Yoda in Episode III: Revenge of the Sith to Anakin while training him to become a Jedi.

RELATED: Star Wars Icon Stands Up For Bullied Boy Who Chose Not to Fight Back, as It’s ‘Not the Jedi Way’

The truth is, most times, we don’t have anything to lose, yet we are still afraid to take action. Whenever you are afraid to do something, simply ask yourself “What’s the worst that could happen?” You may be more able to weigh the costs and benefits of your actions.

So quit that job you hate so much or get out of that relationship that’s making you miserable! You’ve got nothing to lose. On the contrary, training yourself to let go of the things you fear to lose will only benefit you.

“A tyrant can make anything seem to be ‘the will of the people.’”

Princess Leia, who spoke these words in the Star Wars novel Bloodline, is so much more than your regular “Disney princess.” She was a leader, a politician and a fearless soldier on the battlefield. With this line, Leia is basically telling us that tyrants are manipulative and deceitful, and that power alone is not a reason to trust anyone. In fact, it can be a reason not to trust someone.

We often underestimate the charm of sociopaths who mimic generosity while having no actual concern for others, which can be a hallmark for some world leaders, or even of those within our communities. Unfortunately, our faith in the goodwill of our leaders can doom us to manipulation. Thus, without even realizing it, their will becomes ours.

Full Quote: “In a dark place we find ourselves, and a little more knowledge lights our way.” – Yoda, Star Wars: The Revenge of the Sith

In this quote, Yoda speaks about the importance of knowledge in navigating through difficult times.

When the going gets tough, a little bit of know-how can help a great deal. To give you an example: you might be really nervous about something, but if you’ve learned a few breathing techniques or other coping mechanisms to self-regulate, you’ll be able to calm yourself faster and address the situation with more confidence and clarity.

“Many of the truths we cling to depend greatly on our own point of view.”

Full Quote: “Luke, you’re going to find that many of the truths we cling to depend greatly on our own point of view. “— Obi-Wan Kenobi, Star Wars: Return of the Jedi

Moral principles and values are not laws of nature. As philosopher John Locke said, we are born “tabula rasa” — clean slates that, in time, will form a perspective of our own. And that perspective will determine our values, our truths and our beliefs.

For example, Anakin had a choice, just like we all do. He could choose to follow the way of the Jedi or the Dark Side of the Force. He went on a path that led him to believe that Palpatine was the good guy. It was obviously the wrong thing to do, but it was his perspective nonetheless. So be careful about your viewpoints, and make sure they are tempered by as much truth as possible.

“If you define yourself by your power to take life… then you have nothing.”

Full Quote: “If you define yourself by your power to take life, your desire to dominate, to possess, then you have nothing.” — Ben Kenobi, Star Wars: Rebels

Though Obi-Wan Kenobi had a number of opportunities to succumb to temptation, he chose not to, and for him, that made all the difference. While Darth Maul, Kenobi’s ages-old rival, finally finds him hiding on Tatouine in Rebels, he says that Obi-Wan has nothing, calling him a rat in the desert. However, his comeback offers a harder truth for Maul: Obi-Wan had more than anyone on the Dark Side: a noble purpose.

RELATED: Darth Vader Quotes: The Power of the Dark Side

A lot of people want control over others and to possess as much as they can. Sometimes it’s just a narcissistic trait, other times this need comes from insecurities and a low self esteem. Either way, being powerful doesn’t earn anyone the respect and love of others. And all the possessions in the world won’t make one happy or fulfilled; not in any meaningful way, anyway.

“You can’t stop change any more than you can stop the suns from setting.”

As a young boy, Anakin Skywalker was intimidated by the consequences of leaving home to follow his dreams and reach his full potential. His mother, Shmi, who was first introduced inThe Phantom Menace, warmly reminds him that any kind of change in life — be it victory or loss — is inevitable… and that’s okay.

Stepping out of our comfort zone is something we all struggle with, particularly as beings with limited time. But sooner or later, accepting risks and the change they may bring is necessary. While it might seem distressing, change is not necessarily a bad thing. More often than not, even when it may be one we don’t want or expect, change helps us grow.

“We’ll take the next chance. And the next. On and on until we win… or the chances are spent.”

One of the underlying themes of Star Wars is the reality and ugliness of war. But as the story progresses, something else starts to build that’s even more important: hope.

RELATED: Star Wars Icon Stands Up For Bullied Boy Who Chose Not to Fight Back, as It’s ‘Not the Jedi Way’

Jyn Erso, the main character from Star Wars’ first “offshoot” film, Rogue One, and the speaker of this line, goes from being a damaged person who avoids taking any kind of stand, to someone capable of leading an entire rebellion.

This is a really motivating quote that encourages us to to persevere and keep on trying even when the odds are not in our favor. So as Jyn says, take the next chance! You will eventually win.