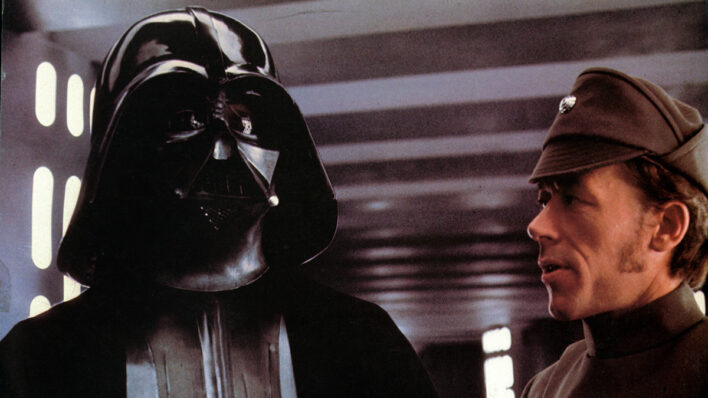 Powerful and funny quotes from Star Wars’ Darth Vader, including quotes to Luke and about the power of the dark side. ‘No, I am your father.’
By Flavia Medrut    March 10, 2021

Powerful and funny quotes from Star Wars’ Darth Vader, including quotes to Luke and about the power of the dark side. ‘No, I am your father.’

Created by George Lucas, the character of Darth Vader is one of the most iconic fictional movie villains of all time. Part of the beloved Star Wars sci-fi fantasy franchise, Darth Vader was a star from the first minute he stepped on screen in 1977’s Star Wars: A New Hope

Prior to his role as the powerful Dark Lord of the Sith in the original trilogy (titled Episode 4: A New Hope, Episode 5: The Empire Strikes Back, and Episode 6: The Return of the Jedi), Star Wars fans were also eventually treated to the story of Darth Vader’s childhood and adolescence in the prequel series, released between 1999 and 2005.

In these films (Episode 1: The Phantom Menace, Episode 2: Attack of the Clones, and Episode 3: The Revenge of the Sith) we discovered that the uber-scary Sith Lord Darth Vader actually started out as an idealistic and goodhearted 9-year-old slave boy named Anakin Skywalker.

Discovered on the desert planet of Tatooine by the Jedi master Qui-Gon Jinn (played by Liam Neeson) and his apprentice Obi-Wan Kenobi (played by Ewan MacGregor), little Anakin Skywalker had natural abilities with The Force led Jinn to believe that little he was the prophesied “Chosen One,” the Jedi that would bring balance to the Force. They took him under their wing and trained Anakin Skywalker to become a Jedi over the course of the Prequel Trilogy.

According to the Jedi prophecy, Anakin had the potential to become the most powerful Jedi ever. Unfortunately, Qui-Gon Jinn was wrong, and Anakin not only failed to live up to the prophecy as the Chosen One, he eventually fell from grace and joined the Dark Side. He was corrupted by the secretive Darth Sidious, a man known to most in the galaxy as Emperor Palpatine, the head honcho of the Galactic Empire.

Any Star Wars fan knows it was difficult to watch little Anakin evolve from a promising young boy to the ruthlessly evil Darth Vader, but without that transformation, we would have never had the opportunity to enjoy all of those amazing Darth Vader quotes, which are enumerated below.

Darth Vader may not have been known for long, inspirational speeches, but he sure did have a way with words. So which is the best Darth Vader quote? Only you can choose! Without further ado, here are some of our favourite quotes from the Original Trilogy, A New Hope, The Empire Strikes Back, and Return of the Jedi.

Let’s begin with some of our favourites from the opening of the first film when his stormtroopers fight their way onto an Alderaan Rebel Cruiser with Princess Leah onboard. After all, who can forget the first time we hear the rich, deep, bass of James Earl Jones’ voice as he interrogates the Princess?

You are part of the Rebel Alliance and a traitor! Take her away

And of course, while she was remanded to a prison cell on the dreaded Death Star not long afterwards, at least she was spared the larynx-crushing treatment Vader meted out to one of the ship’s officers. The officer denied that there were any stolen Death Star plans onboard the ship, and just before snuffing out his life, Darth Vader asked him this:

If this is a consular ship, where is the ambassador?

Commander, tear this ship apart until you’ve found those plans, and bring me the passengers. I want them alive!

She must have hidden the plans in the escape pod. Send a detachment down to retrieve them. See to it personally, Commander. There’ll be no one to stop us this time

Speaking of crushing throats, this was one of Darth Vader’s favorite activities in the first film. When he took part in a high-level meeting discussing the stolen Death Star plans, he said:

DON’T BE TOO PROUD OF THIS TECHNOLOGICAL TERROR YOU’VE CONSTRUCTED. THE ABILITY TO DESTROY A PLANET IS INSIGNIFICANT NEXT TO THE POWER OF THE FORCE.

At this point one of his colleagues insulted him, mocking the power of the force and denigrating it as useless superstition. Big mistake. Darth Vader uttered the following iconic quote while “force choking” him:

I FIND YOUR LACK OF FAITH DISTURBING.

Another great Darth Vader quote occurred near the end of the first film, as Obi Wan Kenobi faced off against him inside the Death Star in a lightsaber battle. Vader said:

We meet again, at last. The circle is now complete. When I left you, I was but the learner; now I am the master.

Just before the end of the first film, Luke flies his X-Wing towards a structural weakness in the Death Star, attempting to fire two proton torpedoes into a small exhaust port that would cause a chain reaction and blow up the moon-sized space station. Darth Vader, following him in his Tie Fighter, recognizes the skill of the pilot, saying:

The Force is strong with this one.

I have you now!

Of course, any fan of the series knows that Darth Vader did not, in fact, have him now. As a matter of fact, seconds after uttering that phrase, Han Solo swoops in to save the day, knocking Darth Vader off his pursuit of Luke, leaving him free to fire his proton torpedoes and destroy the Death Star, ending the first film.

I have brought peace, freedom, justice, and security to my new empire.

You have failed me for the last time.

Perhaps I can find new ways to motivate them.

This will be a day long remembered.

See to it personally, Commander. There’ll be no one to stop us this time.

I am altering the deal. Pray I don’t alter it any further.

Darth Vader quotes to or about Luke

No, I am your father.

(OFTEN CITED AS ‘LUKE, I AM YOUR FATHER’)

There is no escape. Don’t make me destroy you.

Give yourself to the Dark Side. It is the only way you can save your friends. Yes, your thoughts betray you. Your feelings for them are strong. Especially for… sister. So, you have a twin sister.

Your feelings have now betrayed her, too. Obi-Wan was wise to hide her from me. Now his failure is complete. If you will not turn to the Dark Side… then perhaps she will…

It is your destiny. Join me, and together we can rule the galaxy as father and son.

The force is with you, young Skywalker, but you are not a Jedi yet.

Your destiny lies with me Skywalker. Obi-Wan knew this to be true.

You have learned much, young one.

If you only knew the power of the dark side. Obi-Wan never told you what happened to your father.

I have you now!

If he could be turned, he would become a powerful ally.

Luke, you do not yet realize your importance. You have only begun to discover your power.

Join me and I will complete your training. With our combined strength, we can end this destructive conflict and bring order to the galaxy.

You are unwise to lower your defenses.

You have controlled your fear. Now, release your anger. Only your hatred can destroy me.

You underestimate the power of the Dark Side. If you will not fight, then you will meet your destiny.

The Emperor: I have no doubt that this boy is the offspring of Anakin Skywalker.

Darth Vader: How is that possible?

The Emperor: Search your feelings Lord Vader, you know it to be true

The Emperor: He could destroy us.

He will joins us or die, Master!

You don’t know the power of the dark side! I must obey my master.

Darth Vader quotes about the dark side

I see through the lies of the Jedi. I do not fear the dark side as you do

The Emperor will show you the true nature of the Force. He is your Master now.

Give into your hate and anger.

You underestimate the power of the Dark Side. If you will not fight, then you will meet your destiny.

Anakin Skywalker was weak. I destroyed him.

You don’t know the power of the dark side.

The Emperor: There is a great disturbance in the Force

Darth Vade: I have felt it…

From my point of view, the Jedi are evil.

If you’re not with me, then you’re my enemy!

Be careful not to choke on your aspirations, Director.

He’s as clumsy as he is stupid.

I hope so for your sake, Commander. The Emperor is not as forgiving as I am.

He will not be permanently damaged.

Asteroids do not concern me, Admiral. I want that ship, not excuses.

I do not want the Emperor’s prize damaged. We will test it… on Captain Solo.

We would be honored, if you would join us.