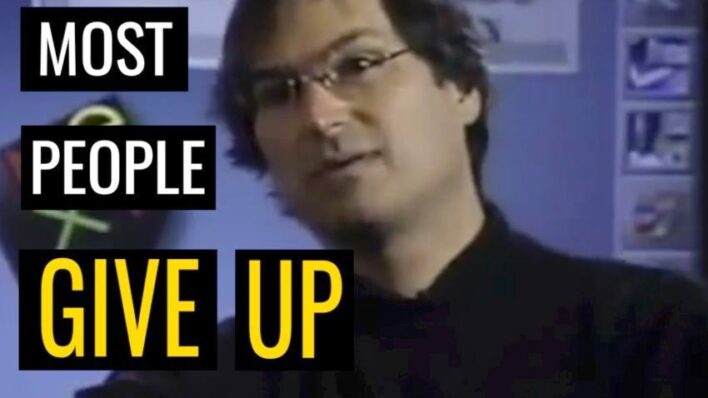 Steve Jobs – Keep Doing Better Steve Jobs says that perseverance is the main determinant of a success, and urges
By Goalcast    June 10, 2017

Steve Jobs – Keep Doing Better Steve Jobs says that perseverance is the main determinant of a success, and urges

Steve Jobs says that perseverance is the main determinant of a success, and urges entrepreneurs to get good stuff out there so others can build on it.

“Most people give up. I don’t blame them. It’s really tough. I’m convinced that about half of what separates the successful entrepreneurs from the non-successful ones is pure perseverance. It is so hard. You pour so much of your life into this thing. There are such rough moments in time, and it consumes your life. I mean, if you’ve got a family and you’re in the early days of a company, it’s … I can’t imagine how one could do it. I’m sure it’s been done, but it’s rough, I mean, because it’s pretty much an 18-hour-a-day job, seven days a week for a while. So, unless you have a lot of passion about this, you’re going to not survive. You’re going to give it up. As somebody once told me, they said, ‘Live each day as if it will be your last, and one day, you’ll certainly be right.’ You know?

“I do that, and I really … You never know when you’re going to go … but you know you are going to go pretty soon. If you’re going to leave anything behind, it’s going to be your kids, a few friends, and your work. Right? That’s what I tend to worry about. I think you have a responsibility to do really good stuff and get it out there for people to use and let them build on the shoulders of it and keep making better stuff.”