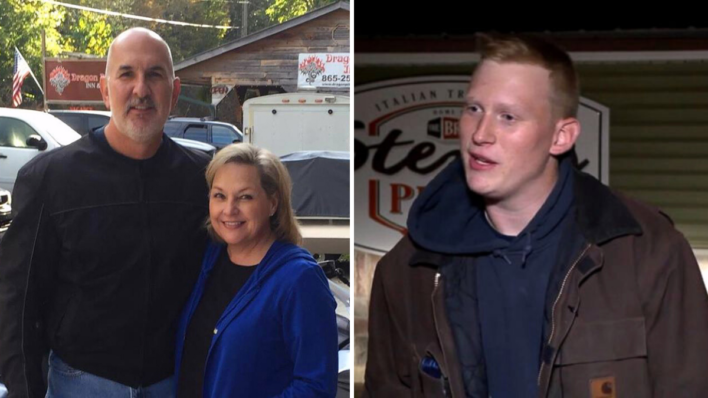 Julie and Rich Morgan were touched after their favorite pizza place made a heartwarming exception.
By Amber Dowling    September 21, 2022

Julie and Rich Morgan were touched after their favorite pizza place made a heartwarming exception.

Rules are usually put in place for a good reason. But sometimes, it’s also important to make exceptions to the rules, especially when there’s a good reason to do so.

People in Indianapolis and Michigan were reminded of that when one pizza place ignored its no-delivery policy to help a couple during a challenging time.

The Special Relationship One Couple Had With a Pizza Place

In 2018, Julie Morgan shared an incredible story about Steve’s Pizza. At the time, she went on Facebook to explain how 25 years ago, she and her husband Rich lived in Battle Creek, Michigan, and found that no pizza rivaled Steve’s.

RELATED: Woman Stops to Give ‘Homeless Man’ Pizza, Doesn’t Realize He Is A Celebrity

“We were young and money was tight, but every pay day, Rich would pick up Steve’s Pizza for dinner,” Julie wrote in her post. “I can’t possibly describe how delicious this pizza is — but several moves and all these years later, it is still the gold standard and we’ve never found a better pizza yet. Rich has frequently critiqued other pizza as ‘good but, it’s no Steve’s.’”

At the time, the couple lived in Indianapolis but planned a trip to their old stomping grounds for Julie’s 56th birthday. “We talked about seeing the leaves and the lakeshore, but that was secondary to our planned visit to Steve’s,” she added.

Why a Highly Anticipated Trip Was Canceled

Sadly, the couple never made it on their trip. Instead, Julie had to take Rich to the ER, and he was placed in the ICU for five days. Worse, they were told his salivary gland cancer had advanced, and he had days, maybe weeks, to live. Steve was placed into hospice care, where they had a steady stream of family and friends.

Unbeknownst to the couple, Julie’s father, David Dalke, called Steve’s Pizza and spoke to 18-year-old manager Dalton Shaffer, the nephew of owner Jeremy Shaffer. “I thought maybe just some contact from Steve’s Pizza, maybe a note, I thought I might be asking too much, but I contacted them,” he told the Battle Creek Enquirer.

Instead, Shaffer asked what kind of pizza the couple liked. “I reiterated to him, ‘Dalton, we are in Indianapolis, and that’s a three-and-a-half hour drive one way.’ And he said, ‘That’s fine,’” Dalke recounted.

How a Struggling Couple Got a Special Pizza Delivery

Shaffer explained to the publication how he just wanted to do something special for the couple, so after closing the store at 10:15 p.m., he packed up a pepperoni and a pepperoni-and-mushroom pizza and headed out. He arrived at his destination at 2:30 a.m., where Dalke and the Morgans’ kids greeted him.

“It was almost like he was just making a delivery across town,” Dalke said. He then offered to put Shaffer up at a hotel for the night, but the teen declined as he had to work later that day. He also wouldn’t accept money for the pizza or gas, and eventually, Dalke pushed a few bills into his hand before he left.

“I took a couple 5-hour Energys,” he later said of the 225-mile drive. “I had to; I was super tired, but I made it, and that’s what counts. It was worth it. I’m glad I did that. I wasn’t going to tell anyone about it. I didn’t even tell my uncle or anything when I left for Indiana,” he continued.

“I just hope people could keep that family in mind and pray for them.”

Julie and Rich learned what Shaffer had done the following day when they woke up. “The kids all came in and told us, and I cried and couldn’t believe it,” Julie told the publication. “I was incredulous.”

She further explained what it meant to her and her family on Facebook. “I am beyond overwhelmed and humbled by this act of genuine kindness,” she wrote. “Dalton brought our family so much joy — and the best pizza in the world — at a really difficult time.”

How One Employee Proved the Importance of Kindness

Shaffer’s decision to pack up a couple of pizzas and make a long drive was about more than putting a smile on a struggling couple’s face. By doing what he did, he helped to evoke nostalgia and good memories during a tough time. He also made Julie and Rich feel special and supported, which may have been essential in getting them through.

It’s a friendly reminder that sometimes we have more power to cheer people up than we think. Going out of our way to do something nice for someone (even if it’s an inconvenience or could take hours out of our day) may mean the world to them during a challenging time. Sometimes a surprise coffee, lunch, flower delivery or custom present can turn a person’s day around.

As for the rules, this story is the reminder some of us may need that sometimes it’s important to stray from them and make exceptions. Some circumstances are exceptional, and it takes a special person to realize that and do what they can to accommodate a person in need.