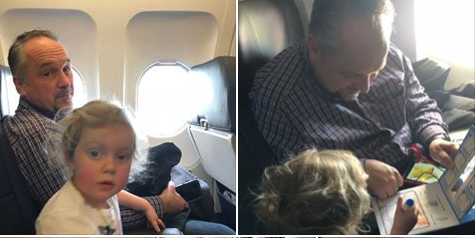 These days, it seems that the majority of airline news involve aggressive passengers, predatory airline practices and horrible service. But
By Eliza Theiss    April 24, 2018

These days, it seems that the majority of airline news involve aggressive passengers, predatory airline practices and horrible service.

But one Arkansas stay-at-home mom and a fellow traveler recently proved there is still hope for experiencing comfortable travel – and the kindness of strangers. Mother of two Jessica Rudeen was flying for the first time with both her toddlers, and she was super nervous about it.

“My first flight with an infant and a toddler started out with a little panic when we boarded the plane. My 4-month-old was screaming his head off…My 3-year-old, who was excited before boarding the plane, lost her nerve and began screaming and kicking,” the young mom shared on social media. With both toddlers kicking up a fuss, Jessica feared being kicked off the plane – after all, this type of thing has happened before.

The kindness of a stranger saves the day

Enter everyday hero Todd Walker, who was seated next to Rudeen and her children.

The father of two, who frequently flies for work, did not roll his eyes, nor did he become irritated. Instead he did something very different – he decided to help, taking 4-month-old Alexander on his lap, which allowed the anxious mother to calm 3-year-old Caroline down and get her ready for the flight.

Then, Jessica took Alex back to feed him, as the baby’s hunger was the source of his fussiness. But while Jessica cared for Alex, Todd continued helping even though “the back of the plane no longer had screams.”

Instead, he entertained Caroline throughout the flight, colored with her, and the two new best friends even watched a movie together. The 4-year-old was utterly enchanted with Todd, even giving him a kiss on the shoulder.“By the end of the flight, he was Caroline’s best friend,” shared Rudeen.

Going above and beyond But the stranger’s eagerness to help didn’t end there. Realizing he was heading towards the same connecting flight as Rudeen and her kids, he helped the family navigate Charlotte’s busy airport, hand in hand with Caroline.

Then, going above and beyond, he changed his seat on the connecting flight so he could help Jessica and her young children. His motivation? Long ago, when his two sons were young, his wife was in a similar situation, and a complete stranger helped her out.

“This guy, Todd, showed me kindness and compassion that I’ve never known from another person,” Jessica posted on Instagram. “I am blown away by God’s hand in this because we could have been placed next to anyone, but we were seated next to one of the nicest men I have ever met in my life.”

Although Jessica and Todd didn’t manage to exchange contact information, the internet did its thing and helped both of their families connect. They are now planning to get together in the future.