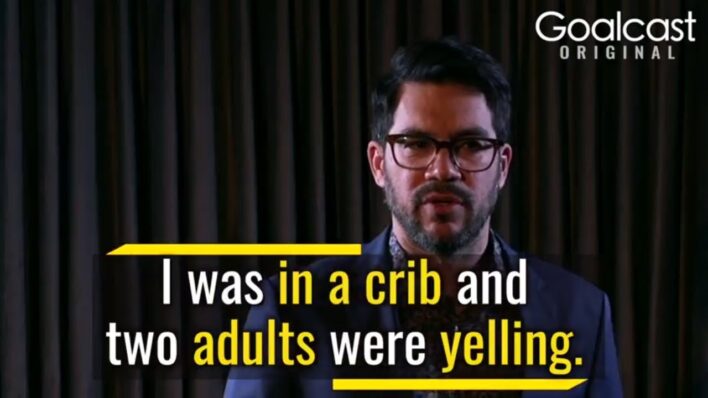 Tai Lopez | How to Take Control of Your Own Destiny

Tai Lopez – Control Your Destiny Savvy entrepreneur Tai Lopez opens up about how he transformed painful, childhood experiences into
By Goalcast    February 26, 2018

Tai Lopez – Control Your Destiny Savvy entrepreneur Tai Lopez opens up about how he transformed painful, childhood experiences into

Savvy entrepreneur Tai Lopez opens up about how he transformed painful, childhood experiences into opportunities for success.

My first memory in life, I remember it very vividly. I was in a crib and two adults were yelling. When my mom came in the crib and was like, “It’s okay,” and I can remember my mom crying. So my very earliest memory as a human is instability. My dad was a big … He was a pro bodybuilder. He was a big strong guy, and I would tell people about my dad like he was still in my life. I never told them, because they’d be like, “Well, where’s your dad,” and I’d be like, “Oh, he’s busy. He can’t come,” but the truth was he didn’t care that much about his kids, and he didn’t care that much about me.

Probably one of the most painful memories I have in childhood, I remember it was my birthday and we lived in San Diego. My mom, she was a single mom and my dad lived still in Long Beach, but for that birthday my dad’s like, “I will drive down from Long Beach and take you out to dinner,” and he said he’d be there at like 5 PM. She had to go to work because she had a night shift job, and she’s like, “Okay. Your dad will be here soon so I’m going to leave you at the house along.” So I sat there, I was on the couch, and I remember waiting for my dad.

It was like 5:30 came, nothing. 6, nothing. We had a home landline. I’m like waiting for the phone to ring, 7, 8. I remember being super sad, but you’re a little kid so you’re like, “Oh,” have hope like, “He’s still going to come. He’s just late. He’s just late. He’s just late.” I don’t remember how long it was, but my mom said she came home at midnight. I was just asleep, literally on the couch just looking out the window and he never came. I don’t know what happened. He was an alcoholic. He probably drank and just forgot about it, so I remember that being super painful and being just like, “My dad doesn’t care about me.”

Life will throw tremendous blows at you. You’ll have the betrayal of a close friend or family, you’ll have sickness, death. Life is painful if I perceive it as what it was supposed to be, but the second I switch it and go, “Wait. No, life is like a puzzle that I was handed. Here’s your puzzle of life, Ty. We took a piece out.” The dad was gone, and when I look at life like that, my life is like an adventure and I’m thankful for it, even the stuff that sucked and the most painful. Sometimes in the moment I couldn’t see it there, but in hindsight, I’m like, “But I wouldn’t have found that puzzle piece.”

Nobody in my family had ever really made money. They say poverty is systemic, and it’s true. Most people, you can’t rise out of your socioeconomic class. One of the biggest predictors of where you’ll be in life is where you’re born. It sucks. So breaking the cycle is something that has to start happening in the world. What broke the cycle for me was realizing that I was doing it wrong. I was in mobile home in Clayton, North Carolina, and I did not have a job, I did not have a resume, I didn’t have anything to put on a resume, I didn’t have a college degree.

I was just laying on the couch, and when I was laying there, the question that came in my head was, “Is this it?” All my friends went to college. They had parents that had more money, and they had this, and I missed this. I remember just going to sleep. I was just depressed. The next day, my mom was there and she said, “You should read this book, Tony Robbins.” I remember being like, “Uh. I don’t want some self-help book.” She’s like, “Yeah, you should read the book,” so I read it and I don’t remember that much of what I read but I remember this one page and it said, “All greatness starts with failure because when you succeed, you party and when you fail, you ponder. And all greatness comes from pondering your situation.”

I remember thinking, “That’s what I was doing last night on the couch.” I was pondering, “What did I do wrong,” and I made myself vulnerable to the fact that maybe I did make mistakes. Maybe I had to change my life. Maybe I had to listen to different people. Maybe I had to try a new path. Einstein said the definition of insanity is doing the same thing over and over but expecting different results. I’m like, “Ty, you’re being stubborn,” so after I read that book, I was like, “I’m going to try something new.”

I went back in that mobile home and I found the yellow pages, and I remember flipping through it going to the financial section. There was this full page ad by this guy Mike [inaudible 00:04:31]. It said [inaudible 00:04:33] Financial Services, and I called them. I called and a secretary, she answered the phone. I kind of pretended, I didn’t lie but I kind of pretended I was coming there to be a customer. I get to the place and I’m like, “I’m Ty. Can I speak to your boss?” I’ll never forget, he was sitting in this big Lay-Z-Boy chair and he had this big mustache. He looked like Tom Selleck.

I wanted to be super honest with him. I said, “Listen, Mike. You don’t know who I am but I know you must be successful because you’ve got a full page ad in the yellow pages. That’s all I know about you, but I know that costs a lot of money. If you teach me what you know about making money, I’ll work for you for free.” He was sitting in this chair. I was talking to him this way and he was sideways, and he just slowly pivoted his chair. “You know, I’ve been looking for someone like you for 20 years. You come back in the morning, and I’ll set you up with your own office, and you can work for me. I promise you, if you listen to what I’m going to say, one day you’ll hug my neck.”

I remember thinking, “That’s a real southern saying.” I was from California originally. I said, “Okay,” and the next day I showed up. He did have an office, but what he had done was he cleaned out a closet with no windows, and he had put a desk, it’s where all the filing cabinets was, and I sat down in the chair and he plopped down pieces of paper and said, “Cold call these people. I’ll give you a percentage of the money you make from them, no guarantees working for me.” So I just started calling, and I sucked at it. I would call people at 6, 6 at night. People were like, “Who are you?” They were hanging up on me.

I remember being like, “Oh no. I think I’ve gone from nightmare to another nightmare,” but I started to get curious and creative. I wrote down a few little different things I would say to the people, and I remember in that first month, I started opening up deals for this Mike [inaudible 00:06:29]. I opened a deal that was $150,000 in commissions if the deal went through. I remember going, “Wow. Life can change fast.” You can either be paralyzed by what life gave you and let the pain, because there will be pain, there will be drama, you can either let it build up and build scar tissue that just paralyzes you, or at some point, you go, “The cards weren’t dealt for me like I wanted, and so I’m going to go recreate those cards.”

That’s what mentors were for me. Not meant for every person, you’ve got a different path that you have to do. I think the most pain that we get in life is when we think life is like a straight line: start, finish and here’s what’s supposed to happen. Nothing is supposed to happen. It doesn’t work that way. In life, if you want to have a complete life, you go find the piece. You put the piece back in.