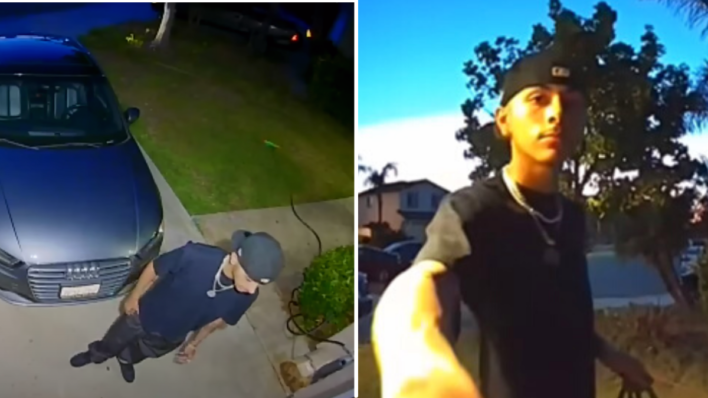 After finding a purse in a grocery store, one 17-year-old drove it home to its owner.

When Melina Marquez’s aunt answered the door one June night, she didn’t find anyone in a uniform, just a young man in all black, holding a green purse.

“So my aunt heard the ring go off, so she opened the door and we see the purse. She was a little confused,” Melina told Inside Edition.

The boy handed the purse to the aunt, explaining that he had found it in a shopping cart at the grocery store and drove to the location listed on the driver’s license inside.

The purse belonged to Eliana Martin, the friend and past roommate of Melina. All the cash, cards, and items that had initially been left in the purse were still in there upon its return.

When Melina asked her aunt if she got this kind man’s name or rewarded him with any money, her aunt said no.

RELATED: Teen Finds $10,000 Sitting in a Purse On the Ground – What He Did After Is A Reminder To All

Melina posted the video caught on her security cameras to social media, calling for anyone who knew this man to step forward so they could properly thank him. The video went viral among the residents of San Diego, allowing it to finally make its way to the young man whom it was meant for.

After the long search, they found their man. Seventeen-year-old Adrian Rodriguez identified himself as the person in the clip.

“My mom’s told me since I was little to always do the right thing, even when no one is watching,” Adrian said. “‘If I had lost my stuff, I would want somebody to bring it back to me.”

How a Teenager Was Repaid for His Act of Kindness

Guided by the lessons of his mom and knowing what he would want if he was in that same situation, Adrian went out of his way to make sure Eliana got back her belongings.

Inspired by Adrian’s generosity, family and friends of the women reached out asking how they could donate to him. That gave Eliana the idea to start a GoFundMe.

RELATED: Homeless Man Goes Above and Beyond To Return Stolen Purse To Woman – Gets Unexpected Reward

The women set out to raise $1,000, but they ended up raising over $3,000. “He could have just taken whatever was in the purse, you know, and he didn’t,” Melina said. “He brought it back, and I just think that speaks a lot about him.”

Adrian was rewarded for his kindness, but that wasn’t what motivated him; instead, he just wanted to help. Often times, we feel like generosity is hard to come across, but sometimes, it’s on your doorstep.