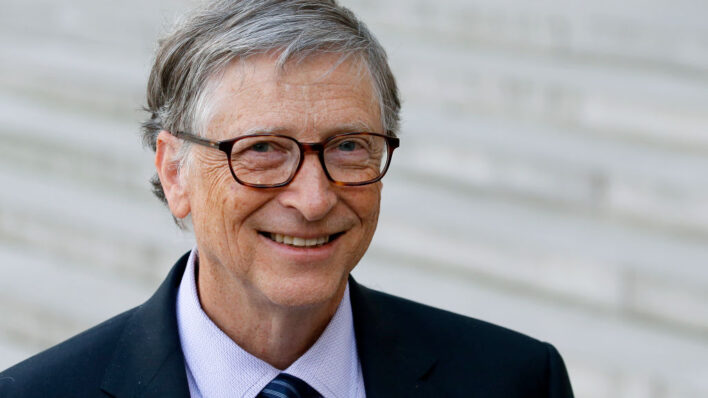 Bill Gates knows a lot about many things. The billionaire is not only the co-founder of one of the biggest companies
By Aly Walansky    June 29, 2018

Bill Gates knows a lot about many things. The billionaire is not only the co-founder of one of the biggest companies

Bill Gates knows a lot about many things.

The billionaire is not only the co-founder of one of the biggest companies in the world, but he’s also a well-known philanthropist. So when he says there are three facts we need to know to better understand the world, we’re going to listen — even if these facts are pretty heavy.

The good news? Knowing these three things will give you a dose of realistic optimism.

They relate to the global rate of childhood deaths, the fertility rate and the number of people who escape extreme poverty. Gates references Oxford economist Max Roser, the founder of the data and statistics website, OurWorldInData.org, as a source.

“One of my favorite websites is OurWorldInData.org. Based at the University of Oxford, it uses statistics — on everything from health and population growth to war, the environment, and energy — to give you phenomenal insight into how living conditions are changing around the world,” says Gates in a post on his blog.

“I asked its founder, Oxford economist Max Roser, to share three facts from the site that everyone should know. Knowing the facts on global changes gives you the context for the daily news and allows you to make sense of new information that you learn. And it must be the basis for political debate, so that we can discuss what we should and shouldn’t do as a society.”

Here’s what Gates and Roser say you need to know:

Fact #1: Fewer children are dying before the age of 5. pic.twitter.com/RNcCNcBTFz

Well, that’s good news, right? Yes, and no. There numbers are still staggering. Each year, 5.6 million children under the age of five die. That’s 15,500 deaths per day and 11 deaths of children per minute, according to data from the UN.

In the 1950s and 1960s, 20 million children were dying every year, according to the same data set. “One key reason why we struggle to see progress in the world today is that we do not know how very bad the past was. Both are true at the same time: The world is much better than in the past and it is still awful,” says Roser.

“To bring this to mind I need to know both statistics: When someone says we can sit back and relax because the world is in a much better place, I point out that 11 children are still dying every minute. We cannot accept the world as it is today. And when I feel hopeless in the face of this tragedy, I remember that we reduced annual child deaths from 20 million to 5.6 million in the last 50 years,” writes Roser.

2. The average number of children born per woman per year is falling

We’re all having less kids. In the last 50 years, the global fertility rate, or the average number of children every woman in the world has, has fallen from five to less than 2.5, Roser says.

That of course has an impact on population growth. “Improvements in conditions for women and the health of children have driven a rapid reduction in fertility rates across the world,” says Roser.

“The problem is that the population is growing the fastest where people are less able to deal with it,” Gates explained in a 2012 blog post.

“The opposite is true. Both the number and the share of people in extreme poverty is falling.”

But these stats can help us feel feel optimistic, says Roser. “The statistics on global change over time tell us that it is possible to work for a better world. The number of child deaths is dropping. The challenges of rapid population growth will not continue indefinitely. And the number of people in extreme poverty is falling,” he says, concluding that this should encourage us to strive for progress.

So things are pretty dire, it’s true…but it’s also better than it could be. And that’s something, right?