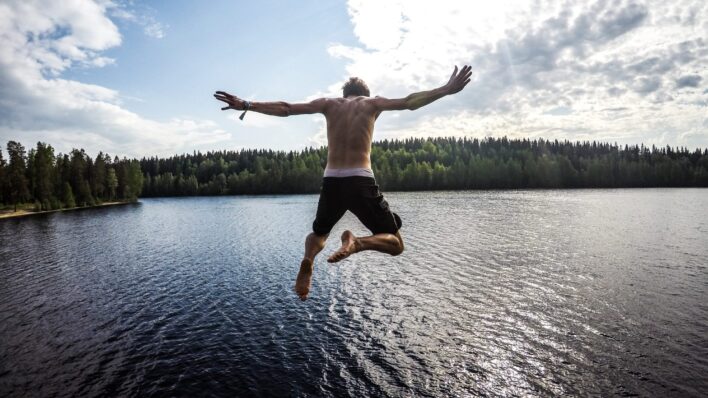 How many times have you had the opportunity to go up and talk to somebody — be it someone you’re attracted
By Vadim Revzin    April 5, 2018

How many times have you had the opportunity to go up and talk to somebody — be it someone you’re attracted to, a potential new friend at a party, or someone that works in an industry you’re interested in — and chosen to walk away? I’ve done it. And each time it happens, there’s a mini internal battle that takes place. Turns out, I’m a hell of a negotiator.

Optimistic me: “Go up and talk to her.”

Insecure me: “Yeah, okay Casanova, what would I even say?”

I: “You see how many interesting people there are here? She doesn’t want to talk to me.”

O: “Yeah, but she’s standing there alone — offer to get her a drink.”

I: “Then she’ll feel obligated to talk to me, and what if I run out of things to say?”

At this point, with my own ego now successfully deflated, I usually concede and walk away. But not before spending another 10 minutes lamenting over what could have been and regretting my lack of action.

All of this simply because I was too concerned with one potentially negative outcome. But what if something good happened instead?

This tendency is not completely my fault. When we make decisions, our brains are not programmed to assume the best possible outcome. Instead, our survival instincts take over, and we default to assessing the risks involved in any situation, choosing the safer course of action.

So how do you get past this mental barrier?

The answer is simple — don’t make it a decision.

President Obama has been quoted saying that during his presidency he seldom dressed himself. All of his suits, dress shirts, and ties were picked out for him in advance.

Why? Because he was making hundreds of decisions every single day, which left no room for non-critical ones. Picking his clothes in the morning would waste valuable mental energy that he desperately needed to conserve.

My internal dialogue is a perfect example of how taxing the simple decision to talk to someone can be.

The 3-Second Rule to Taking Action Fortunately, there’s a way to outsmart the “insecure you.”

That’s it. Only give yourself three seconds.

With only three seconds to work with, you’re not giving yourself enough time to overthink things. If you no longer have to get over any mental hurdles, or make any decisions (should I talk to this person?) it’s easier for your brain to simply act.

The first few times you do this will feel uncomfortable, especially if it’s not something you typically do.

After some practice, you will find that

In the beginning, if you feel like you have nothing to say, just say hello. You can always default to something simple like “Where are you from?”, as saying anything is already far better than doing nothing.

As you get better at this, you’ll start to think of more creative and fun things to open the conversation with. “Where’d you get that awesome sweater?”, “I have the same exact shirt at home…but you wear it better”, “Are you here for the free beer too?” are all good examples.

If you’re lucky, you’ll start to build more meaningful relationships. If nothing else, you’ll feel accomplished for getting over a misguided fear.