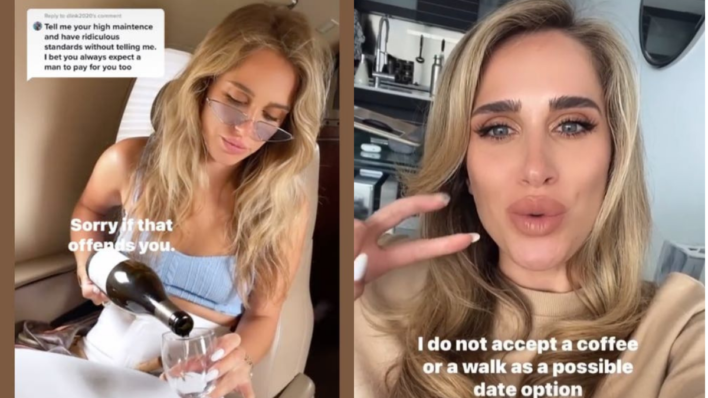 One TikToker who thumbed her nose at simple date ideas faced a furious backlash from those accusing her of missing
By Bryan Liquor    June 9, 2021

One TikToker who thumbed her nose at simple date ideas faced a furious backlash from those accusing her of missing what matters most.

‘NO to zero effort men’

First dates are full of excitement and butterflies. They’re generally a chance for two strangers to break the ice and test the waters. Maybe go for a walk, or grab a coffee.

Watch out when suggesting this type of date to to Tik-Toker Kornelija Slunjski , otherwise known as Koke Beaute.

In a video titled ‘NO to zero effort men,’ she shut those ideas down.

“I do not accept a coffee or a walk as a possible date option,” she said.

“First of all, I’m not a dog that needs to be walked. Second, I have a Nespresso machine at home – works fabulous”

So, just what would an ideal date with Koke Beaute consist of? Men, pay attention.

After concluding her monologue, she flashed a smug smile.

Her video was later shared on a Reddit forum aptly named ‘Cringetopia.’ It racked up 37,700 upvotes and 5,300 comments in just two days. As you can imagine, most were less than supportive of Koko Beaute.

“I mean, I understand that you guys say dinner is high maintenance, but that’s just like… what I’m used to, you know?”

Oh, and she said all this while opening up a bottle of wine on a private jet.

And as her opinion on who should pick up the bill? You guessed it.

“Where I come from, and that is Europe (Croatia), men pay for the first, second, third or whatever… like all the dates,” she says.

“And I’m not going to change my mind about this. That’s how I was brought up.”

To coffee date or not?

To be fair, you have to give credit to Slunjski for knowing what she wants and owning it. After all, we can’t demand authenticity then crush it when it makes us cringe.

However, we can definitely debate whether her path leads to lasting happiness.

And so, just maybe working on ourselves and truly getting to know someone else as a person can be a better long-term plan. Otherwise, you might end up eating alone.